Apple says it was unaware of an NSA software implant that could control iOS devices and denies that it worked with the NSA to make surveillance easier. In a statement to All Things D, the company said "Apple has never worked with the NSA to create a backdoor in any of our products, including iPhone. Additionally, we have been unaware of this alleged NSA program targeting our products." The program in question is called DROPOUTJEEP, described in a leaked 2008 slide as a tool capable of turning on and capturing data from iOS microphones and cameras and remotely pulling files, contact lists, text messages, location data, and more.

While security researcher Jacob Appelbaum suggested that the program could only work as perfectly as the NSA claimed with help from Apple, the leaked documents describe the FBI, NSA, and CIA covertly intercepting a variety of electronic devices to install malware, not necessarily with the company's knowledge. In this case, the slide says the first version of DROPOUTJEEP would be installed via close physical access, while future versions could be installed remotely. Previous leaks, especially for the internet data collection program known as PRISM, have apparently shown that Apple and other companies allowed the NSA to pull data from their servers, although all companies have denied these claims. But installing malware on an iPhone can be done by non-NSA hackers as well, and the DROPOUTJEEP exploit was leaked alongside other modules that could supposedly let agents control any GSM phone, regardless of manufacturer. 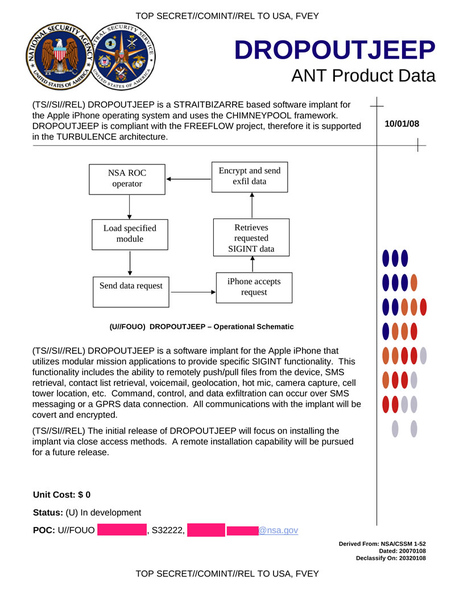 The real question is where the program has gone since this document — which was composed in the very early days of the iPhone and smartphones in general — and whether Apple and other companies can effect much meaningful change. "Whenever we hear about attempts to undermine Apple's industry-leading security, we thoroughly investigate and take appropriate steps to protect our customers. We will continue to use our resources to stay ahead of malicious hackers and defend our customers from security attacks, regardless of who's behind them," says Apple in its statement. All signs so far, however, point to surveillance capabilities that let the NSA crack or entirely get around many security systems.