If an ayatollah tweets in Iran, who hears it?

If an ayatollah tweets in Iran, who hears it?

Over the past few months, both Khamenei and Iranian President Hassan Rouhani have warmed up to social media, regularly using Facebook and Twitter to release statements, push agendas, and, in some cases, engage in diplomatic tussles. It’s not that different from how politicians across the globe use social platforms, but the Iranian case is unique considering the leadership’s long-standing public aversion to all things Western — and to social media, in particular.

Sites like Facebook, Twitter, and YouTube are blocked within Iran, underscoring a fundamental tension that has only recently begun to crystallize: as Iranian officials continue to spread their messages across social platforms, the country’s citizens remain quarantined behind web filters and firewalls, unable to legally access the services that have suddenly become an important part of their political landscape.

"Certainly there is a glaring hypocrisy."

"Certainly there is a glaring hypocrisy in how openly and frequently Iran's officials engage in social media," Afshon Ostovar, a Middle East analyst at CNA Strategic Studies, wrote in an email to The Verge. This hypocrisy likely isn’t lost on everyday Iranian internet users, Ostovar adds, though hard-line conservatives and government officials have begun speaking out against it, as well.

On Monday, Iran’s police chief publicly criticized the country’s leaders for using social media, telling Iran's Mehr news agency that their actions could encourage others to break the law.

"The fact that some officials have started to cross red lines gradually and enter spaces prohibited for citizens is not a good thing, and everyone should observe the rules," said Ahmadi Moghaddam, the police chief. "By violating the law [themselves], the officials should bear in mind that their actions should not pave the way for others to violate the law."

Iran blocked Twitter, Facebook, and YouTube in 2009, after demonstrators used the services to help organize massive protests against the disputed re-election of conservative president Mahmoud Ahmadinejad. About 26 percent of Iranians use the internet, and only those savvy enough to use proxy servers or virtual private networks (VPNs) can access blacklisted sites that the government considers immoral or threatening to the Islamic regime.

"officials should bear in mind that their actions should not pave the way for others to violate the law."

The government tightened its control over the internet under Ahmadinejad, calling for the creation of a state-run internet and government-controlled email service. But the election of Rouhani, a political moderate, has raised hopes that the country may relax its grip, and there are signs that change may be on the horizon.

In an October Twitter conversation with Jack Dorsey, Twitter's co-founder, Rouhani said he wants to ensure that Iranians have open access to global information, echoing statements he made in an earlier interview with CNN. Culture minister Ali Jannati was even more pointed last month, telling state media that Iranians should have free access to "not only Facebook, but other social networks." 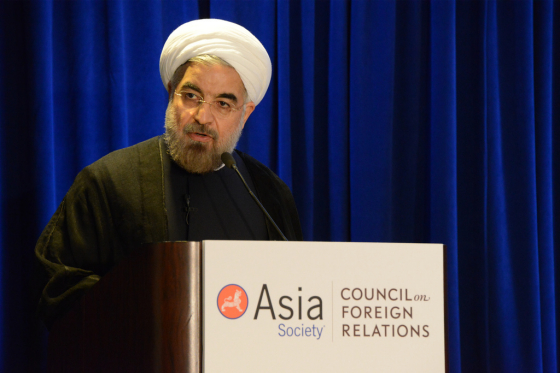 The election of President Hassan Rouhani has raised hopes that Iran may loosen its web restrictions. (Flickr / Asia Society)

Rouhani joined Twitter in April and launched a separate English-language account one month later. It's not clear whether he authors every tweet himself, and Twitter has yet to verify him or Khamenei, but the accounts are believed to be authentic and Twitter has verified other members of Rouhani's cabinet.

But the administration's calls for an open internet have been countered by Iran's more conservative factions, including the ayatollah. In a speech delivered last month, Khamenei said that during the 2009 protests, the US had "hoped to overthrow the Islamic Republic with the help of media activities and networks such as Facebook, Twitter, and other such networks. They had these foolish delusions." Others have expressed similar concerns over American web services. Moghaddam told Iranian media last year that Google is nothing more than a "spying tool" for the US, reiterating security fears that have been percolating since 2010, when the devastating Stuxnet virus struck the country's nuclear and industrial facilities. Subsequent reports suggested that the attack was ordered by the US.

Experts say that much of this anti-Western rhetoric is politically motivated, especially for the ayatollah, who, as Iran's theocratic leader, represents the interests of religious conservatives. Even on Twitter, he continues to post brazen and often incendiary comments about Israel and the US, putting him in stark contrast to the moderate Rouhani, who has adopted a more conciliatory tone on social media.

"Engaging with the US, not to mention compromising on the nuclear issue, goes against what the leader and his hardliner constituency have promoted for the last decade," Ostovar says. "In a sense, Khamenei has to play the bad cop to Rouhani’s good cop."

Yet despite his public misgivings, the ayatollah and other Iranian leaders have realized that social media can allow them to both control their messaging and engage with the West — a major objective of the Rouhani administration. Economic sanctions levied over Iran’s nuclear program have crippled the country’s economy, spurring Rouhani to pursue the international nuclear agreement that began to take form at last month’s negotiations in Geneva.

"Khamenei has to play the bad cop to Rouhani’s good cop."

Iranian officials launched a renewed social media offensive while in Geneva, using Twitter to directly contest statements from the US and to seize control over the media narrative. Prior to the most recent round of negotiations, the government apparently launched an English-language website, NuclearEnergy.ir, as part of an attempt to defuse suspicions that its nuclear program could be used to create weapons.

Such actions are clearly targeted toward international audiences, though it’s not as if Iranian citizens are completely in the dark. People without VPNs or other workaround solutions are still aware of what their leaders tweet, because reformist newspapers, magazines, and TV networks often analyze what Iran’s leaders say on social media, typically publishing screenshots of their tweets and Facebook posts.

"Even for Iranians who don’t use social media, it’s covered by [traditional] media," says Narges Bajoghli, a PhD candidate in anthropology at New York University who has written extensively on Iran. "So they're engaged with what Rouhani and others are saying, even if it's through secondary sources."

"they're engaged, even if it's through secondary sources."

Iranians are therefore well aware of what their leaders are tweeting, though there doesn’t seem to be much of a groundswell for internet reform. Bajoghli says that could be because Iranians realize that the web can be a double-edged sword.

"I think some people have become rightly paranoid about the internet being an easier way to track activities," Bajoghli says. "They understand that what they do online can be tracked by the government, or at least that's the fear that they have."

And although Rouhani seems intent on loosening restrictions and filters, there’s little he alone can do to bring about change. Ultimate power over Iran’s internet rests in the hands of its Supreme Council of Cyberspace, which Khamenei established last year to provide "constant and comprehensive monitoring over the domestic and international cyberspace." As president, Rouhani is the chair of the committee, though it also includes members of the Revolutionary Guard and other conservative factions. Finding consensus among reformists, conservatives, and, of course, the ayatollah will be difficult, experts say, and it likely won't happen overnight.