Colorful gadgets are mostly a ploy, I’m told. Best Buy shoppers may be drawn in by a purple camera or a shimmering orange laptop, but they leave the store with something in black. I’ve heard the same thing from a number of manufacturers across plenty of product categories. And looking around my apartment, I’m as guilty as anyone.

But the HP Chromebook 14 doesn’t come in black, so I was left with no choice but to buy the gadget that first caught my eye — a big, gaudy, matte pink notebook. It’s the biggest, loudest Chromebook yet, and at $299 it’s a remarkably affordable device for what it offers: a big 14-inch screen, a brand-new Intel processor, and all the ports and options you might not expect from a Chromebook.

Chrome OS is having a moment. Manufacturers around the world are starting to make Chromebooks, and many have promised to bring them out of the bargain basement. A Chromebook could soon become a truly viable notebook, and not just a living room companion or your family’s fourth laptop. On paper, the HP Chromebook 14 is the best attempt yet — not to mention the most colorful. 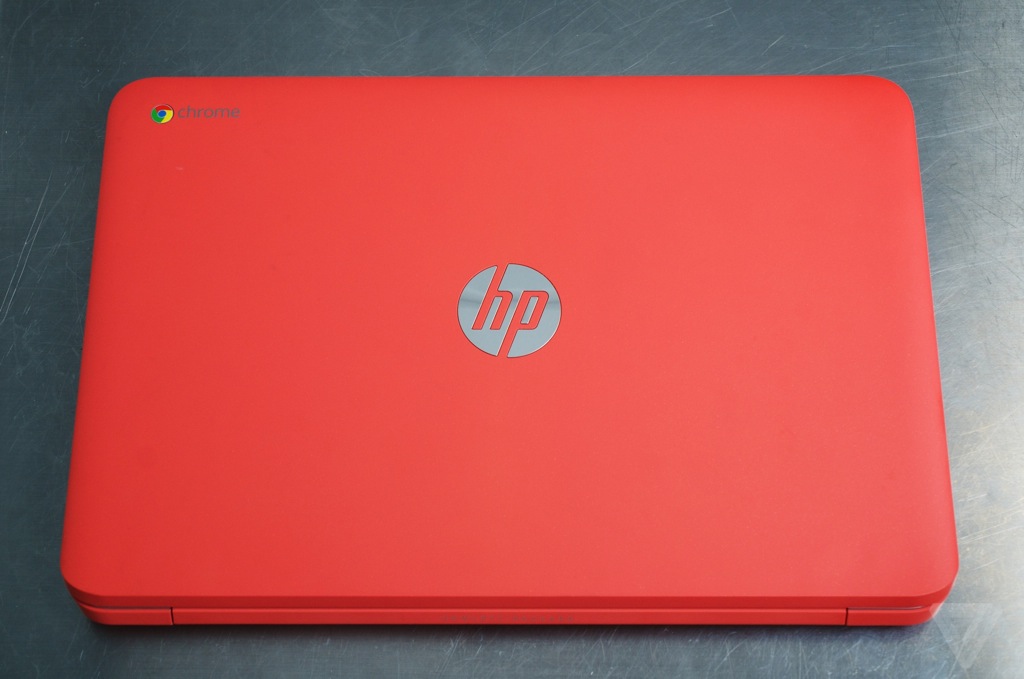 A sight for bored eyes

HP’s tiny Chromebook 11 feels like a toy — it’s thin, light, and cheap, and it’s almost surprising that there’s a working laptop inside. The larger Chromebook 14, on the other hand, feels like a computer. It’s made of grippy, rubbery plastic that is comfortable in my hands and on my lap but feels like something of a wholly different class than the sleek, metallic MacBook Air or Acer Aspire S7 — but then, it is of a wholly different class.

At 4.08 pounds and 0.81 inches thick, there’s nothing particularly portable about the Chromebook 14. $299 rarely buys much in the way of fit and finish, and with seams and ridges everywhere you look there’s nothing particularly high-end about it either. But it’s solid and sturdy, having already survived one drop off the edge of my coffee table and plenty of trips in my bag. It feels well-made and carefully assembled, which in some ways matters even more than the raw materials.

It's far from high-end, but it doesn't feel cheap

This laptop is made to stand out, and it’s nothing if not a conversation starter. Everyone who sees it in my apartment or on my desk asks about it, much like they might casually notice a piece of art on the wall. It’s the colors: available in coral, white, and aqua, this is without question the most ostentatiously eye-catching computer I’ve ever used. My salmon-colored coral model has already picked up a few scuffs in my bag, but the color has only grown on me — and it looks really good on my black coffee table. 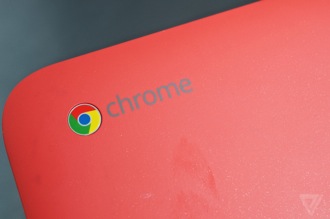 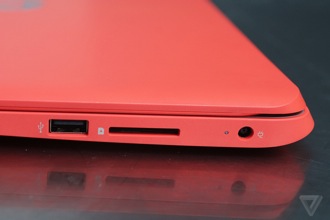 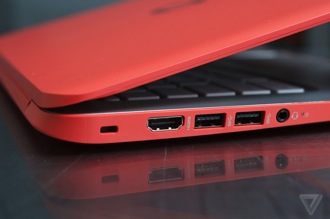 Chromebooks have always been small, bare-bones, and focused entirely on giving you access to the browser. But the Chromebook 14 comes with an SD card slot, an HDMI port, and three USB jacks (including two for USB 3.0). They certainly have their uses within Google’s operating system, and they clearly don’t meaningfully affect the device’s price tag. But HP’s either taking Chrome OS more seriously than any other manufacturer, treating it as a true Windows equivalent rather than something cheaper and inferior, or it’s simply recycling chassis designs without much thought or optimization.

In at least one case, it’s clearly the latter. The Chromebook 14’s 14-inch, 1366 x 768 display ought to be left in whatever storage bin HP pulled it out of. It’s big, but it’s not particularly bright and doesn’t have great viewing angles — it looks muted and washed out next to the vibrant, colorful Chromebook 11. The bigger problem, though, is that 1366 x 768 is barely acceptable on an 11.6-inch screen, and it’s nearly unusable blown up to 14 inches. At 111 pixels per inch, text becomes blurry and jagged instead of crisp and clear and small icons can be hard to discern. The screen looks like it’s dirty with a sheen obscuring the picture you want to see — but it’s just a bad display. It makes the Chromebook 14 feel like a chore to use, not like a laptop I could stare at all day.

The Chromebook 14's display is a dealbreaker

That’s particularly frustrating because HP got so many other things right. From the build quality to many of its components, the Chromebook 14 may not outperform its $299 price tag, but it operates smartly within its confines. Its trackpad, a problem for a shocking number of laptops, is a surprisingly smooth and glassy experience. The keyboard is clicky and responsive, even if the keys are a bit coarse and the letter labels are just stickers. The keyboard is the one obvious optimization for Chrome OS: the Caps Lock key has been traded for Google’s global search button, and a number of Chrome-specific function keys sit above the number row. The larger chassis leaves room for a comfortable palmrest, a well-spaced keyboard, and a big trackpad, and HP takes advantage across the board. 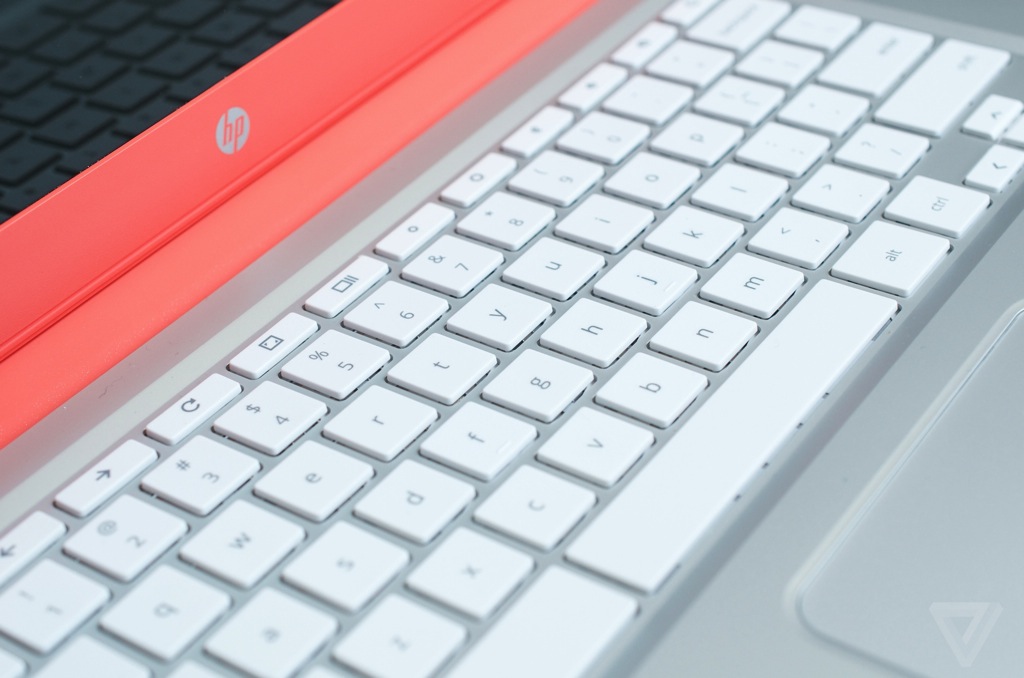 What's in a Chromebook?

Chromebooks exist in an awkward performance bracket. They’re typically used for less-intensive activity — "it’s just a web browser," or so goes the common refrain — and as such don’t really need high-end processors. But high-end processors would enable more powerful activities, and particularly with Intel’s latest Haswell chips there’s a huge boost in battery life and efficiency too. The Chromebook 14’s Celeron 2955U chip (the same as in the Acer C720) is for now a decent middle ground: it’s based on Haswell, but is designed explicitly for cheaper, lower-end devices like this one. 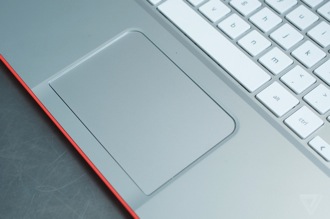 Solid performance, but nothing exactly extraordinary

The mix feels just right. The Chromebook 14 is fast and smooth, even with some of the more processor-intensive activities (which are mostly Google-designed explorations of Chrome’s true capability). I never ran into a practical activity that didn’t work well, whether it was watching Netflix, running two or three dozen concurrent tabs and windows, or my favorite: playing as many YouTube videos as humanly possible. Eventually, the 2GB of RAM became overloaded and the machine slowed down, but that took quite a few YouTube videos.

The 16GB solid-state drive doesn’t hold much, but it makes the Chromebook 14 fast to boot and resume from sleep and keeps the machine running cool and quiet. There’s no sense with this computer that it stores power beyond the wildest imaginations of Chrome OS, but it keeps up just fine. And it does it all day: on the Verge Battery Test, the Chromebook 14 lasted ten hours and six minutes; I easily get eight or nine hours of constant use. As far as I’m concerned, any Chromebook without all-day battery life is just a pointless exercise in industrial design, and even though HP clearly had to make the Chromebook 14 bigger and heavier to last this long, it’s easily worth the tradeoff. 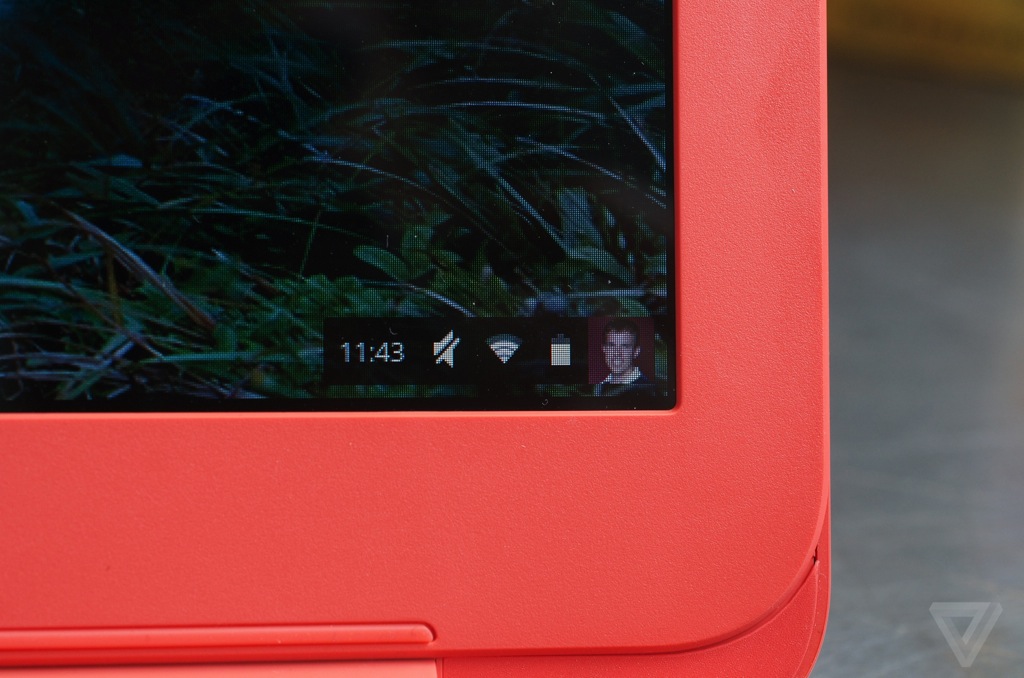 At this point, Chrome OS is still a limited operating system, but it’s not raw functionality that’s the problem. There’s almost nothing you can’t do with the Chromebook 14, other than heavy-duty video editing and PC-class gaming. But for everything it offers, Chrome OS is still in places an awkward and unintuitive platform. If you have more than one window open, navigating between them is needlessly difficult: there’s no easy way to see all your windows at once, or even scroll through them in an obvious way. The local file manager is still too basic, and as soon as you have more than a few apps installed they become cumbersome to organize and find.

More than its spec sheet or feature list, that’s what holds Chrome OS back — there’s plenty here for both novices and power users, but the UI balks at anything beyond the basics. Chrome OS is great for email and web browsing, but even as HP seems to make the case for a Chromebook as a full-featured laptop, Google holds it back. There are signs of that changing, as Google works on a better notification system and a better platform for offline usage and native apps, but it’s not there yet. 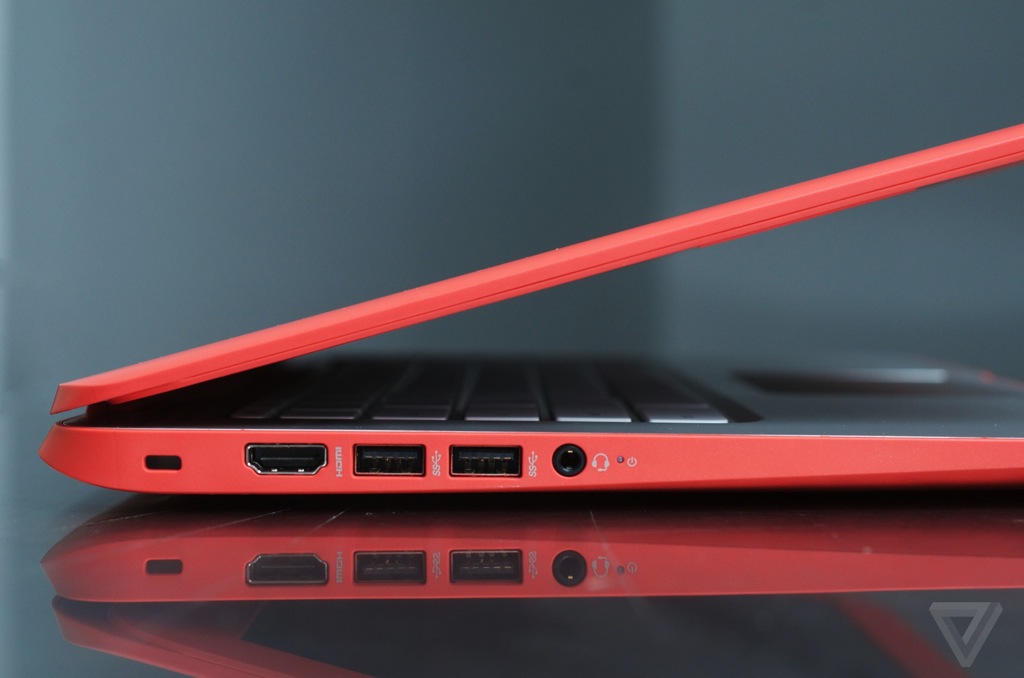 We already have a great expensive Chromebook in the Pixel, and we have a great cheap Chromebook in Acer’s C720. But for Chrome OS to really take off, for Google to prove it can truly compete with Microsoft and Windows, we need a great midrange Chromebook. One that takes the platform seriously, that maximizes its capability, and that does so without costing a fortune.

HP presumably made its sacrifices — only 2GB of RAM and 16GB of storage, not to mention that terrible screen — in the interest of selling the Chromebook 14 for $299. But not only are those dangerous places to skimp and save, they aren’t necessary: with a better screen, more RAM, and a larger hard drive, the Chromebook 14 would be one of the best $399 or $449 laptops on the market, one that I would happily recommend. Solid performance, 10 hours of battery life, a good trackpad and keyboard, a dead-simple way to check your email and even get some work done? That’s an easy sell. But as is, you’re better off spending $50 less and buying Acer’s C720, which can’t touch the Chromebook 14’s look but offers a virtually identical experience in a smaller, lighter, cheaper body.