New research maps the secret structure of the sun

New research maps the secret structure of the sun

The phenomenon of solar flares, as seen above, might be better understood thanks to the discovery of giant cells.

Nearly half a century ago, scientists started to unravel the structure of the sun and determine how solar material flowed on its surface. At the time, they predicted that the star should have massive cell structures, some 16 times the width of Earth, that carry currents across its surface. But these giant cells, despite their size, have remained elusive. Now, a researcher who 30 years ago worked on the problem as an intern has managed to solve the puzzle — moving this phenomenon from theory to reality.

Our sun, like many stars, is in part comprised of a convective layer that transports heat from its core to its surface. This transportation, in turn, creates pockets of solar currents that are constantly evolving (much like currents in the Earth's atmosphere). Scientists have known about some of the cells carrying these currents for centuries. Namely, they've been aware of relatively small "granules," which are about the size of Texas and only endure for about 10 minutes, as well as so-called "supergranules," which are about three times the width of Earth and last for about a day. Both discoveries led scientists to think that granules and supergranules were part of a hierarchy of currents, which pointed to the existence of giant cells.

If only those cells were easy to find

If only those cells were easy to find. In large part, they've eluded scientists because the motion caused by giant cells is relatively slow, and therefore tough to detect. Granules have flow velocities (a measure of how quickly the material within the cells move) of about 3,000 meters per second (almost double the speed of a X-51A scramjet) and supergranules flow at 500 meters per second. In contrast, giant cells have flow velocities of just 10 meters per second (about the speed of Usain Bolt), meaning the motion is subtle and difficult to tease out. 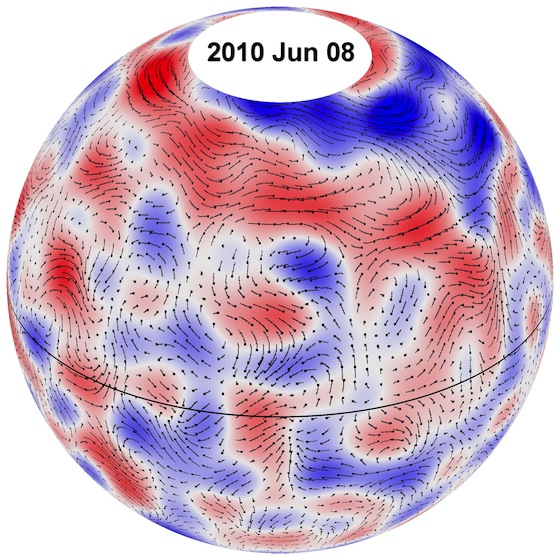 An illustration of giant-cell flow trajectories in 2010. Credit: Hathaway/NASA

But David Hathaway, a NASA scientist whose new paper in Science confirms the existence of giant cells, was able to find the structures by tracking supergranules over time. Hathaway and fellow researchers used NASA's Solar Dynamics Observatory to monitor the sun every 45 seconds for a few months. With careful averaging, they were able to determine that large groups of supergranules were being moved by an underlying presence — the long-sought giant cells.

These giant cells have a very visible consequence

They may have been tough to detect, but these giant cells have a very visible consequence: they cause the equatorial region of the sun to rotate faster than the poles. The cells are also important to understanding the sun's weather. "The analogy with Earth weather systems is very close," Hathaway says. "The same way weather systems carry moisture in the Earth's atmosphere, these things are carrying magnetic fields in the sun's surface and interior." Both granules and supergranules move magnetic fields around, and Hathaway thinks giant cells won't be any different. This phenomenon may have an impact on the strength of the magnetic field at the poles of the sun, which determines how intense the 11-year solar cycle of increasing and decreasing sunspots is going to be.

Hathaway also hopes that this finding yields a better understanding of where sunspots form. "The observation we're dying to get is whether there is any indication in these flows about where new sunspots are going to emerge," he says. Despite several theories on where sunspots might form with respect to these giants cells, pinning down the connection between won't be easy.

"Everything interesting about the sun is related to magnetic fields."

The next step for Hathaway and other experts will be to observe how magnetic fields respond to flows within the giant cells. "Everything interesting about the sun is related to magnetic fields — coronal heating, flares, coronal mass ejections," Hathaway says. Pinpointing the connection between flow and magnetism would allow scientists to better predict the behavior of solar storms and how they'll affect the solar system (like stripping away the Martian atmosphere), the Earth, and our satellites. "What does the solar wind look like? If you do produce a flare and a coronal mass ejection, how is it going to move through the interplanetary space? All of that is given by what this magnetic field does at the surface," Hathaway says. "I think we will get a better hand on that given the fact that we now see these flows."