Sending large pieces of high-density glass into space is an expensive and tedious endeavor, which is why a new project from the US Defense Department has turned to plastic instead. The US Department of Defense's Advanced Research Projects Agency (DARPA) today announced a new plastics-based orbital telescope that can fold out and create considerably larger, lighter and cheaper lenses than traditional glass-based optics.

Plastic is one-seventh the weight of glass

The project is called Membrane Optical Imager for Real-Time Exploitation, or MOIRE for short. DARPA's using polymer membrane, which comes in at one-seventh the weight of glass. The film's about the same thickness as household plastic wrap, DARPA said in a post announcing the project, but not as efficient as glass. To compensate, designers are simply using larger lenses to make up for the difference. The array that will be used in the final project could reach 68 feet in diameter when unfurled, resulting in imagery that could see about 40 percent of the earth's surface at any given time. 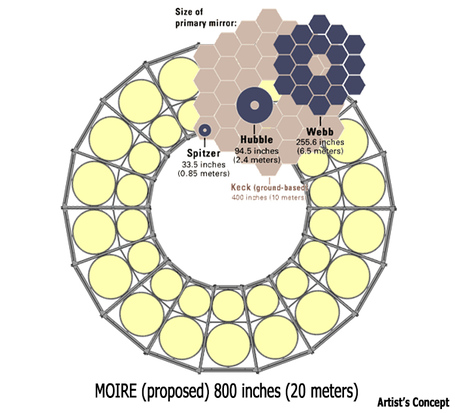 DARPA says the MOIRE program is currently in its "second and final phase," and has already been prototyped. When completed, such optical systems could result in more powerful telescopes that fit in smaller rockets and shuttles, with eventual use in tracking weather systems or for reconnaissance. Here's a clip explaining more about how it works: