Does the smartphone of the future have a curved screen?

What if screens didn't have to be flat? It's a question designers and engineers have been asking for years as they imagined tablets you could roll up like a newspaper, or mocked-up smartwatches that were just screens coiled around our wrists. Displays could be even larger while devices shrank; they could be more durable and more flexible; they could even be on all four sides of a smartphone instead of just one. It would change how we think about screens, and how we interact with the devices we use every day.

While everyone dreamed, LG went to work and built its first-ever curved phone, the G Flex; it and the Samsung Galaxy Round are the only smartphones of their kind. The G Flex is a high-end smartphone in every way, but its 6-inch screen doesn't lay flat — it bends. And it flexes.

Bendable, foldable, flexible screens have long hovered on the horizon; now, LG’s hoping that it can make them a reality. Is the sci-fi dream of a moldable display about to come true?

At first, I almost didn't notice the gentle concavity of the G Flex. Its curve is subtle and vertical, the top and bottom of the phone curling forward ever so slightly. Put it face-up on a table, and the top and bottom both rest slightly aloft; flip it over and you'll see the screen glow in the small gap between it and the table. It's flat enough that it doesn't wobble, but pronounced enough that it makes a half-decent catapult.

The G Flex exists almost entirely to show off LG's curved OLED display, the 6-inch, 720p screen that is the centerpiece of its design. I've certainly never seen anything quite like it, but once the novelty wears off, it's not entirely clear why a curved screen like this is a good idea. LG says the curve makes the phone feel more comfortable against your face, provides a more immersive video-watching experience, and makes the screen less prone to glare because of the way light reflects off it. The last part seems to be true — there's noticeably less glare off the G Flex, especially in sunlight, than with most other big phones. If movies are more immersive, however, it's due to the sheer size of the display. And I don't care what it's made of: a 6-inch smartphone is never going to feel comfortable on my face while I make a phone call. 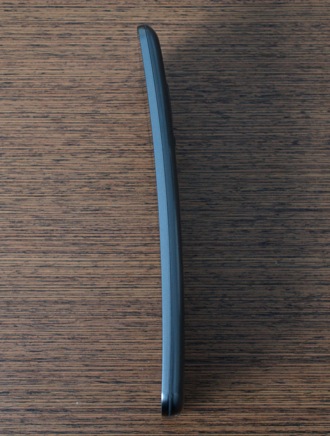 Why is a curved screen cool? I still don't know

Samsung's horizontally curved Galaxy Round is much more ergonomically awkward than the G Flex, but it comes with some clever optimization for its form factor. Tip the phone over to the side and you'll see notifications or battery levels — it's a small innovation, but at least it’s an attempt to do something unique. LG offers nothing: there's a strange, laggy animation on the lock screen that moves as you tilt the phone, but that's neither relevant to a curved screen nor at all cool. We're given no reason to want a curved display — just proof that LG can make one.

Ultimately, the curvature may not be what makes phones like this useful. It's the fact that in addition to bending, the screen can flex. With enough pressure I can effectively flatten the phone, only to have it pop back into shape when I let go. I stepped on the phone, sat on it, bent it in my hands, and loaded heavy things on top of it, and it never creaked or snapped under the pressure. This is a phone you can stick in your back pocket (as long as you have big ones) and sit on without worrying about it. And from what we've seen, the screen itself is even more flexible – LG just made a slightly more rigid chassis to go along with it.

The 6-inch display is otherwise fairly unremarkable. Most high-end smartphones have screens both smaller and higher-res than the G Flex with its 720p; this one just doesn't look that sharp in comparison. It's an OLED display by necessity: it's made of plastic substrates so it can flex and is then bonded to the glass panel on the front. The screen does have great viewing angles and solid color reproduction — it's a good display, just not a great one.

The display is something new and different, even if it's not yet obviously better. But that's really where the G Flex's uniqueness begins and ends. In almost every other way, the G Flex eerily resembles a phone we've seen before. 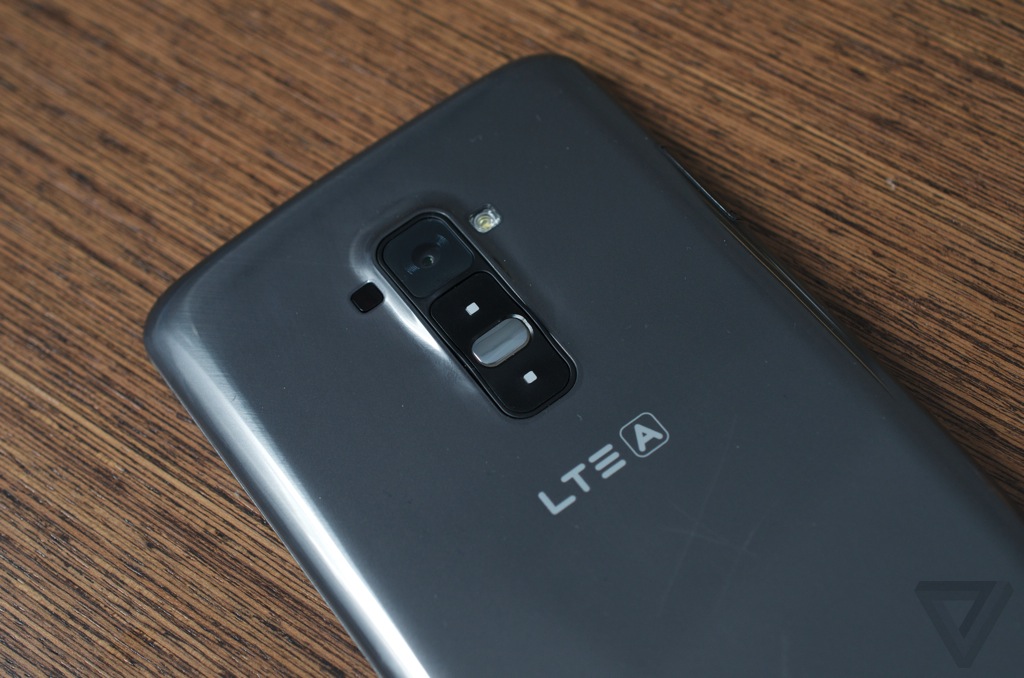 The G Flex’s buttons give it away. The sides and top are barren, with the camera lens, power button, and volume controls in a row down the glossy, gray plastic rear. I found myself hunting on the edges of the phone for the volume controls before catching myself, but the learning curve was much shorter this time. Shorter because I've seen this before on the LG G2.

Other than their displays, the phones are virtually identical — same slimy, plastic back that picks up dirt and fingerprints alike. Same tiny bezels accentuating the huge screen. It has the slightest of brushed-metal textures to it, but this is a big hunk of ugly plastic and nothing else. (I should mention that there's a retractable antenna in the bottom-left corner of the phone, but that'll be gone by the time this phone makes it to the US.) The phone's many seams and occasional creaks make me worry for its longevity, too, though I've had no problems so far. 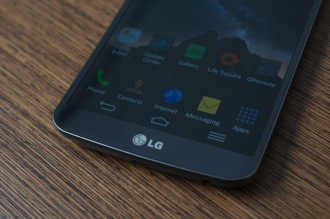 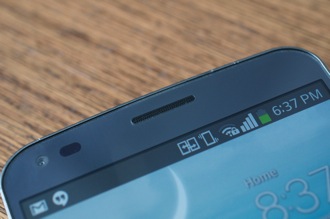 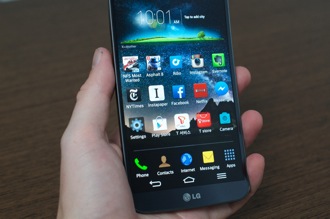 The G2 is a big phone, but the G Flex is a giant. At 6.3 inches tall, 3.2 inches wide, and between 8 and 9mm thick, it's virtually impossible to use in one hand and incredibly comfortable for typing with two. Even without the curve-created bulge, the 6.24-ounce body feels huge in my pocket. It makes the HTC One and the Galaxy S4 feel normal, and the iPhone feels almost bizarrely small in comparison.

The G Flex tries to be all about software, but it ought to be hardware-first

The G Flex is, like the G2, a deference to the software — and LG's not the only company implying that smartphone hardware doesn't really matter. But hardware matters incredibly here: the G Flex could have been the ultimate futuristic smartphone machine, a vision of what could and might be. Instead it's just a cool new screen grafted onto an old, average body.

Except this body is like Wolverine. LG says it's able to "heal," literally repairing scratches and dings by itself. The company won't say exactly how it works other than that there's a special coating on the device designed to automatically cover and fix hairline scratches. Looking at the countless tiny blemishes around the edges of my iPhone, I could get into this idea.

For smaller scratches, the ones you might incur sliding the phone around on a desk or throwing it in your bag, the tech works. After waiting a few minutes, (less if I rubbed furiously on the scratch), small nicks and scrapes mostly disappeared. But anything big sticks around — a scratch from my house key is still etched into the back of the phone a couple of days later, and that doesn't seem likely to change. Imagine Wolverine if he could heal from paper cuts and nothing else — that's the G Flex. Your phone will look like new for far longer than you might expect, but LG can't save you from your clumsiest moments. 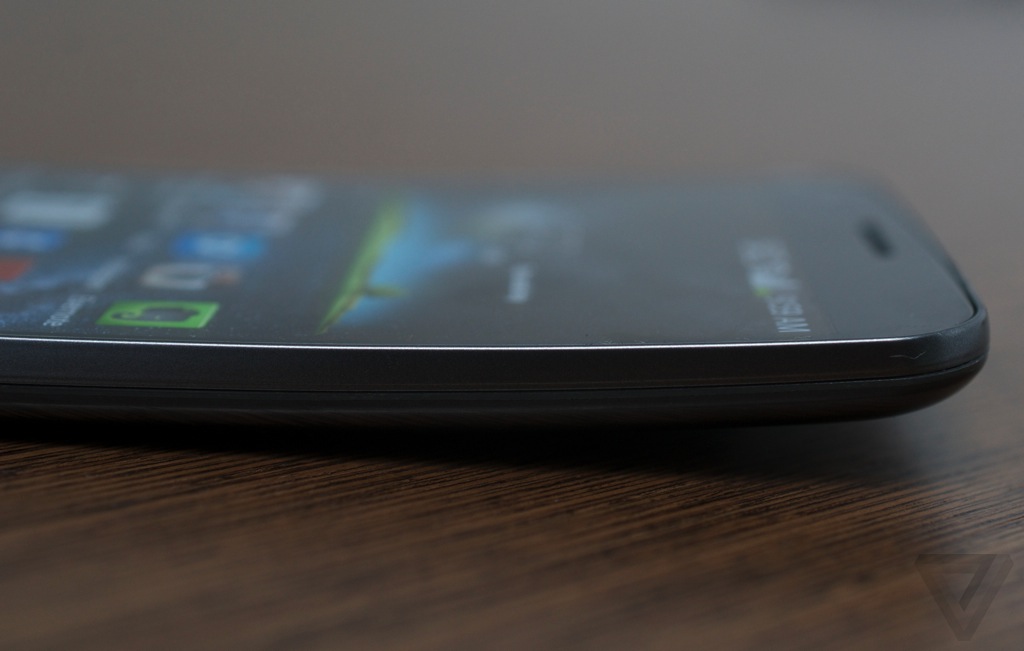 There's plenty worth stealing from the G2, particularly its choices of components. That the G Flex has the same Snapdragon 800 processor, 2GB of RAM, and 32GB of internal storage is a very good thing. The phone is incredibly fast and responsive: whether I was jumping between a handful of apps, running two at the same time, or just massacring a series of ultra-expensive cars in Asphalt 8, the G Flex kept up just fine. It scored near the top of its class in every one of our benchmark tests, and I have yet to encounter a single performance issue.

The camera is another place where LG smartly didn't mess with a good thing. The 13-megapixel rear shooter is among the best Android cameras available, taking sharp pictures and offering more manual control than most phones I've used. Thanks to LG's gigantic list of scene modes, filters, and camera options, there's really nothing you can't do with the camera. Unfortunately, there's no image stabilization in the G Flex (a space-saving move, apparently), which does make for slightly blurrier photos in low light. The app is fast, if kind of ugly and a little unintuitive. The G Flex's camera doesn't exactly set the world on fire, but it's still one of the better Android shooters you can buy.

There's plenty worth stealing from the G2

Then there's battery life, an increasingly consistent issue with enormous phones. The G Flex lasted more than eight hours on the Verge Battery Test, placing it easily among the longest-lasting smartphones on the market. I got a day and a half out of the phone even with heavy use — I truly don't worry about the G Flex's battery, and that doesn't happen often with smartphones. 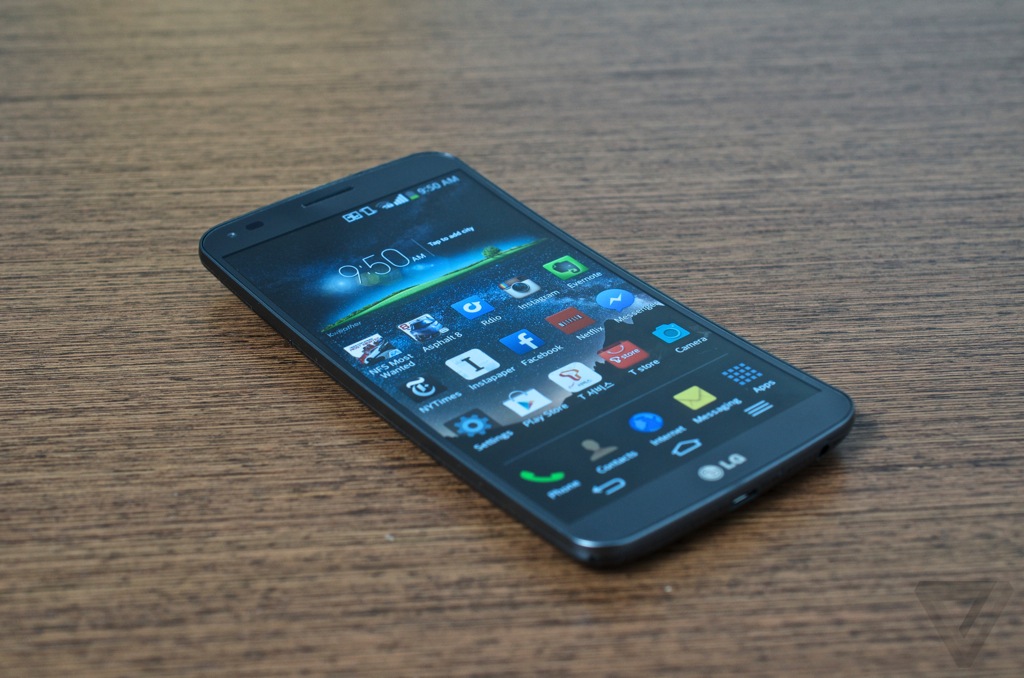 LG's ability to make good, capable hardware has never been in question. Its software chops are an entirely different story. The G Flex, like the G2, comes with a heavily skinned version of Android 4.2.2 which appears to have been redesigned to look like a Samsung phone from three years ago. Everywhere you look there are ominous dark colors, huge bubbles, strange skeuomorphic touches, and very little evidence that there's anyone paying aesthetic attention. The notification window shade never ceases to infuriate me, obscuring half the screen with settings and toggles instead of showing me, you know, notifications.

The feature list is long, and full of ugly icons and fonts

LG's taken Samsung's approach of loading its phones with every feature and setting it can think of, and the G Flex certainly ticks all the boxes. There's an IR blaster, a notification LED, two clocks on the lock screen, an eye tracker, a face tracker (apparently different from the eye tracker), a second way of multitasking by swiping apps off to the side, endlessly customizable menus, settings, and even icons… there's basically nothing you could want to change about the G Flex that you can't change. (Except, of course, the notification window shade.)

Yet for all it does, for all it can do, there's still nothing specifically geared toward making use of the curved screen. Even LG doesn't seem to know what it addsoutside of vague buzzwords like "immersive." 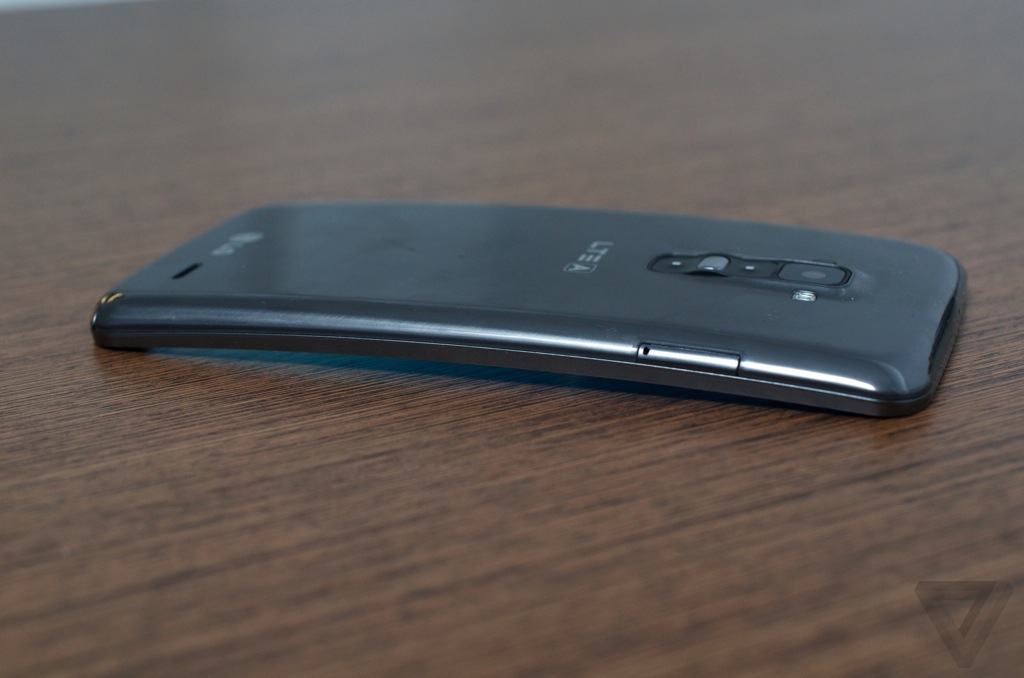 LG made a phone with a curved display. That's certainly impressive, a reminder that its engineering prowess is still as good as it gets. And there's plenty to like about the G Flex, from its long battery to its solid camera and impressive performance. It's a solid smartphone, even if it is bigger and lower-res than I'd like.

But I wouldn't tell anyone I know to buy this phone — especially since its current price is in the realm of $940. For all it is and claims to be, there's nothing practically compelling about the curved screen. The self-healing coating is interesting but limited, as much psychological comfort as actual solution. The G Flex feels like a tech demo, an R&D prototype that was accidentally swapped in a shipping crate with the G2. LG just decided to roll with it, put the G Flex on sale, and see what happens.

Congratulations, LG. You made something new, something different. Now your real work starts: convince us to care.