Great potential, but it isn't realized yet

Apple today quietly switched on what many consider to be a secret weapon of iOS 7: iBeacons. The technology allows your iPhone to provide a location-aware shopping experience whenever you walk into any Apple Store in the US. It does this by communicating with tiny, low-power Bluetooth transmitters hidden above shelves and under product display tables. These transmitters reveal your precise location to the Apple Store app, enabling it to instantly ping you with notifications about hardware you're toying with at any given moment. Perhaps more importantly, it also highlights features of the Apple Store app you may not have known about. For instance, approaching the iPhone section will result in a prompt asking if you'd like to check your upgrade eligibility.

But Apple's stores are just the first step; iBeacons could start popping up at retailers, museums, sports arenas, and countless other destinations in the months to come. Macy's is already conducting a private iBeacon trial through a partnership with Shopkick. (An authorized app is necessary to make iBeacon work. Nothing happens if you don't have an app capable of "listening" for the transmitters installed.) Since the potential here is so big, we decided to waste no time testing the technology at Apple's stores. To put it lightly, we came away with mixed results.

I first tested the service today at the sprawling Apple Store located in New York City's Grand Central Terminal. According to the Associated Press, Apple is using iBeacons across all of its US locations, so it seemed a lock that this store, in such a historic location, would be up and running on day one. And employees claimed that it was. But I circled the entire store, visiting every section for several minutes at a time, and not once did a prompt appear. As usual, the Apple Store app knew which store I was standing in, but that's not a new feature. When it came to iBeacon notifications, nothing came through — regardless of how long I stood in front of the iPhones on display. I locked my phone and woke it up several times to no avail. Puzzled, I asked an employee for help. He checked to make sure my iPhone 5S had all the required settings enabled (it did), and even pointed to a table under which a transmitter had been installed. Nothing. He said he'd let a manager know about the situation.

iBeacon was up and running at the cube

After striking out at Grand Central, I headed to Apple's most iconic store in New York City: the cube at Fifth Avenue. Immediately upon walking in, a notification welcomed me. iBeacon appeared to be working. Next up was trying out the iPhone example cited in the AP story. After spending a minute or so testing out the iPhone 5C, up popped a notification explaining how easy it is to check eligibility status and get a trade-in estimate on any existing iPhone. But I wanted to see what else iBeacon could do, so I kept wandering the crowded store. There were no notifications when I stopped near the iMacs, nor after I'd spent a few minutes sampling the company's fantastic MacBook Air. Surprisingly, I also got zero feedback when picking up the brand-new iPad Air and iPad mini with Retina display. Certainly there's a balance to be struck when pinging customers directly; in-store notifications could quickly become overwhelming if you get a new message at every corner of the store. Still, it's odd to walk by flagship Apple products and see nothing. 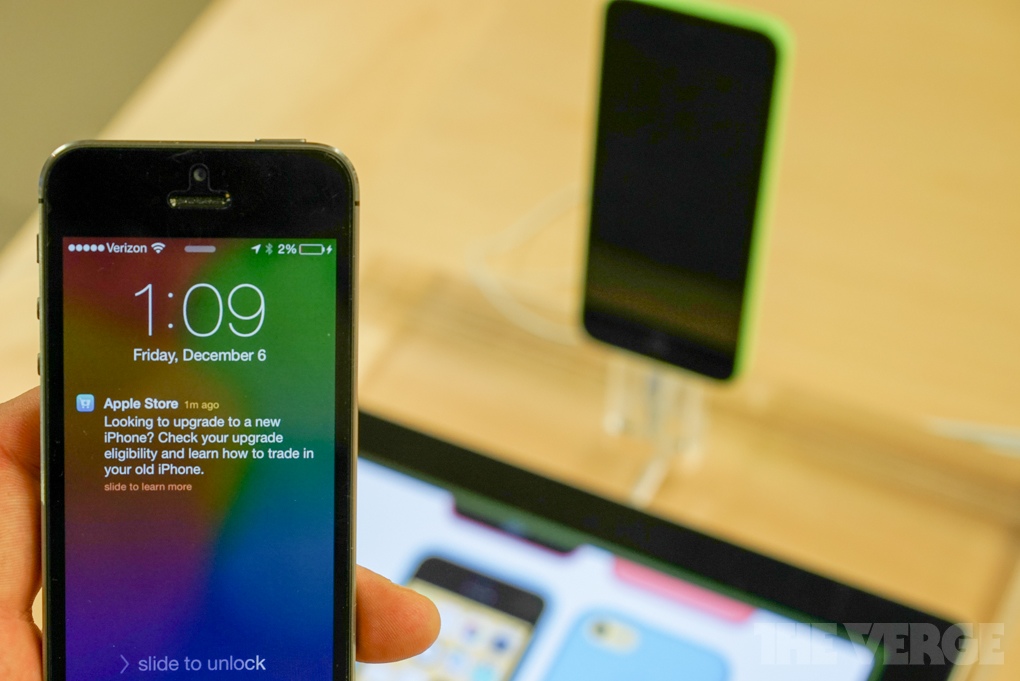 The only other time that I saw an iBeacon notification was when I neared the accessories section. Here, the app encouraged me to scan items for user reviews and to access Apple's EasyPay process — another tool that customers may be unfamiliar with. But aside from specific notifications about iPhones and accessories, the only other prompt I saw during the visit was the initial welcome message. In fact, that one reappeared so frequently that it grew rather annoying in the limited time I was at the store. Presumably it's an early quirk that will be worked out in due time.

A retail worker I spoke with emphasized that the deployment of iBeacons is a "work in progress" and while he wouldn't reveal every transmitter location to me, he was gracious enough to show me what they look like. In typical Apple fashion, they're designed to blend in wherever they're placed. It's doubtful you'd even notice the nondescript gray squares while gazing at items on the shelf. 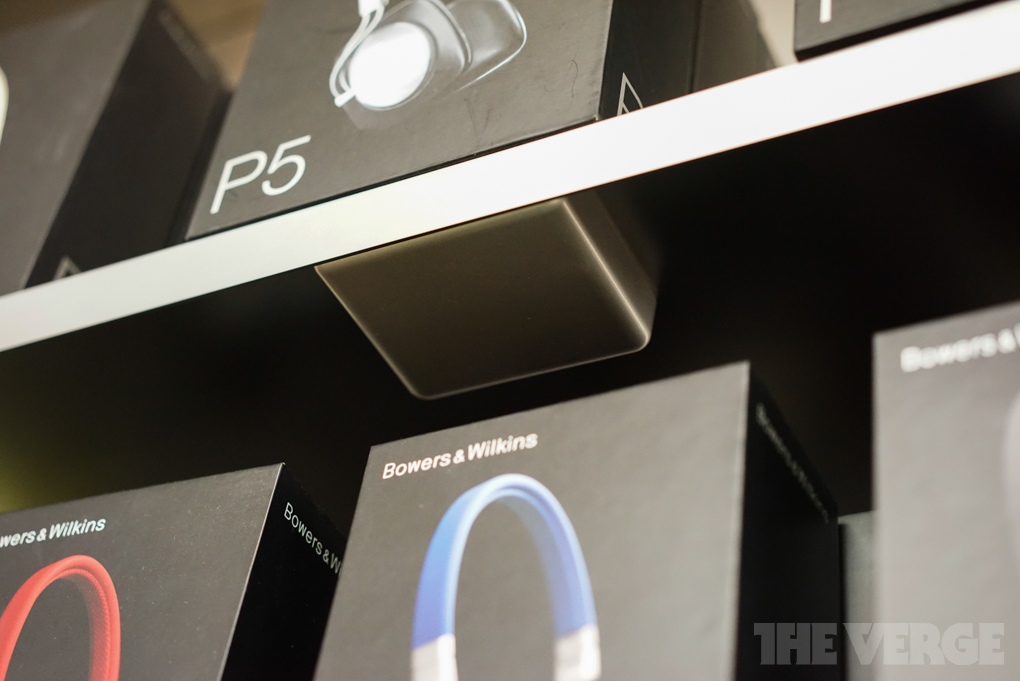 After using iBeacon on day one, it's clear Apple is just getting started here. The "work in progress" line was no exaggeration. When in-store notifications worked, they were convenient. But even then, it's easy to imagine more innovative ways of using this system. The company undoubtedly has a treasure trove of data on its shoppers, and iBeacon could surface some of that information in a way that benefits customers. Why not show users which iPhone case has the best reviews, or which MacBook Pro configuration is most popular? Offer quick comparisons on speaker docks or headphones, perhaps. The precision of iBeacon makes all of this possible. Apple faces the challenge of deciding which notifications are helpful, and which are excessive.

As it stands, the Apple Store contains dozens of iPads that offer essential details on the company's phones, tablets, and computers. The Apple retail experience remains in a league of its own. Sources familiar with Apple's plans tell The Verge that iBeacon isn't intended to dramatically change how you shop there — at least not yet. Still, if iBeacon is to reach its true potential (and be widely adopted), Apple needs to lead by example and prove that it's a tool capable of enhancing that experience every step of the way. We're excited to see where the technology goes from here.

More from this stream Apple's iBeacon: tracking the tech that makes your iPhone a billboard