Every Xbox One console is a developer unit, but an option to enable the dev kit mode is being used to prank gamers this week. An image (embedded below) has been making the rounds on forums and social networking sites promising Xbox 360 backwards compatibility through six steps on an Xbox One console. Instead of providing any type of backwards compatibility, the steps will render an Xbox One useless in a constant reboot cycle, effectively bricking the console.

Microsoft’s Larry Hryb (Major Nelson) took to Twitter on Friday to warn gamers to avoid the trick and reaffirm that there’s no backwards compatibility on the Xbox One. While it's surprising to see Microsoft leave such a powerful menu exposed in a consumer console, it's not the type of setting you'll easily stumble upon. It’s not clear how many have fallen for the trick, but given one British teenager paid £450 ($735) for a picture of an Xbox One on eBay earlier this week we wouldn’t be surprised if some are gullible enough to try the steps. The Xbox One prank follows a similar image that tricked some iPhone users into believing their handsets were waterproof following the release of iOS 7.

Warning: do not attempt the steps below 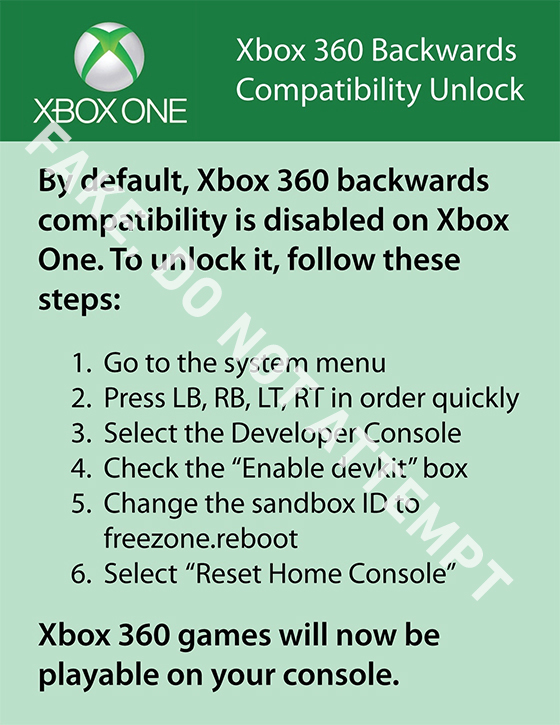