Cold wars: why Canada wants to claim the North Pole

Cold wars: why Canada wants to claim the North Pole

A looming battle over Arctic resources just got more interesting

The Great White North is looking to expand its horizons.

On Friday, the Canadian government was expected to submit an application to the UN Commission tasked with evaluating which countries can claim exclusive rights to resources — namely oil and gas — found in waterways far beyond their borders. Instead, however, the country made a surprising pivot: at the insistence of Prime Minister Stephen Harper, they submitted a partial application rather than a full one. That's because, according to The Globe and Mail, Harper wants government scientists to seek additional data that would support a more expansive claim — one that includes the North Pole.

Under the UN Convention on the Law of the Sea, which was finalized in 1982, countries can lay claim to ocean floor well beyond their borders — as long as they provide robust scientific evidence to prove that this seabed is an extension of their continental shelf. Already, countries have sovereign rights to resources within 200 nautical miles of their territorial waterways. For a country to determine whether they have economic sovereignty beyond that distance, the UN agreement requires comprehensive mapping that establishes some sort of geologic justification for the claim. And where the Arctic is concerned, Canada, the US, Norway, Russia, and Denmark have been amassing scientific evidence for more than a decade in an effort to increase their piece of this resource-rich pie. "This is about a long-term investment in potential resources," says Martin Pratt, director of research at Durham University's International Boundaries Research Unit. "If states don't claim their territory, there's a possibility that the global community will say, ‘No, sorry, you missed your chance.'"

To prevent that scenario, countries need to submit an application staking their claims within 10 years of ratifying the UN convention (Canada ratified in 2003). And the necessary research is arduous, expensive, and often very cold: the Canadian government spent upwards of $200 million on its scientific process, which included dozens of icebreaker and helicopter treks for teams of scientists, and even the use of an unmanned submarine to collect data beneath frigid waters. Some of that research occurred in collaboration with the US, which despite not yet having ratified the UN agreement is already amassing reams of its own evidence. "If the US doesn't ratify, then we don't know what happens if there's a dispute," says Rob Huebert, associate director of the Centre for Military and Strategic Studies at the University of Calgary. "What do you do about a contested area with the US if there isn't an agreement that governs how that dispute is resolved?"

Indeed, countries have good reason to vie for Arctic turf — and worry about potential disagreements. The 18-million-square-mile region, though largely unexplored, is thought to contain around one-third of the world's oil reserves — all of them thus far untapped. "It's a dangerous and difficult region to drill, but the idea of profits seem to exceed those risks for governments," Huebert says of the Arctic, an area characterized by moving ice floes, frigid temperatures, and extreme weather events. "We're not seeing anyone pull away." 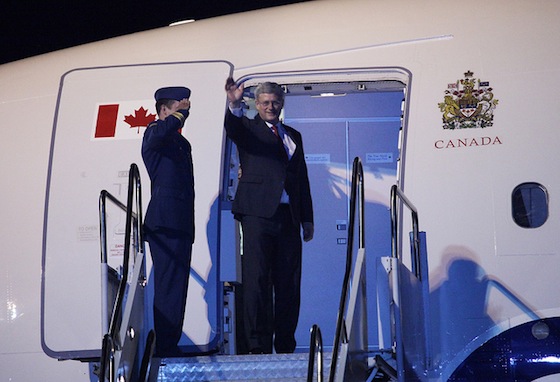 In contrast, Canada appears to be pushing ahead — and doing so with uncharacteristic aggression. Harper's decision to scrap the proposal assembled by government-funded scientists and push for a bigger chunk of the Arctic wasn't exactly the diplomatic approach some experts were hoping for — and could catalyze discord with Russia and Denmark, both of which might vie for portions of the North Pole as well. "These scientists are among the best in the world, and if they don't think the facts support extending Canada's submission, then they're right," says Michael Byers, a professor at the University of British Columbia who specializes in Arctic sovereignty. "Mr. Harper will, I'm sorry to say, be sorely disappointed."

And in a further twist, the burgeoning tussle over North Pole sovereignty likely has nothing to do with oil and gas. That specific region isn't thought to contain much in the way of resources. Instead, Byers says, Harper's maneuver is purely political — an effort to bolster his domestic popularity and flex some international muscle. "The North Pole has extreme emotional value; people have an image that's essentially of Santa's workshop," Byers says. "So there's a huge domestic political angle to this, the idea of claiming the North Pole for your country."

Byers, for one, is dubious that Canadian scientists will ever amass the kind of evidence Harper's looking for — if they haven't already collected that data, he says, it probably doesn't exist. So while both Harper and Russian president Vladimir Putin want to represent "that strong man of the North image" — and sometimes do, in oft-panned photo ops — at least one of them won't have scientific legs to stand on. (After their first application was rejected for an absence of evidence in 2002, Russia is now doing more mapping to assemble a new application.)

It'll take decades for the UN commission to even evaluate Canada's submissions — they get to around four each year, and have a backlog of more than 40 related to waterways around the world. And drilling in the inhospitable, outer reaches of the Arctic is even further off. But Byers worries that Canada's aggressive stance on the North Pole will create diplomatic tensions far before any commission decision. "An overly ambitious application creates problems with Russia. And there's no reason to create problems with Russia," he says. "But it's a well-known fact that a lot of politicians don't look beyond the next election."

Nor, at least in Harper's case, do they take a close look at their country's ability to militarily defend any bombastic claims if necessary. While experts agree that armed conflicts over Arctic resources are unlikely — and years off — Canada doesn't exactly have the upper hand. "You look at Russia and you go, ‘Oh god, we're screwed,'" Huebert says, noting that Canada's Arctic military presence numbers in the few hundreds with potential cutbacks looming. Byers agrees. "It's ironic, because Canada is not a particularly well-equipped country in terms of military," he says. "It's a bit strange, you know, to have the mouse poking the bear here."