Martian lake was able to support life for thousands of years

Share All sharing options for: Martian lake was able to support life for thousands of years

An ancient lake on Mars was capable of supporting life for tens or hundreds of thousands of years, researchers reported today based on findings from NASA's Curiosity rover. In March, NASA announced that the lake was once capable of supporting microbial life, but little more was known. Now researchers have shown that the lake existed around 3.5-3.6 billion years ago and actually contained an "Earth-like" environment. "There would have been some snow, maybe ice up in the mountains around the crater rim," John Grotzinger, project scientist for Curiosity, said at a press conference this morning. "It's pretty darn similar to Earth."

"It's pretty darn similar to Earth."

Not long after touching down in the Gale Crater last August, NASA's Curiosity rover was driven over to Yellowknife Bay, a trough over 16 feet deep made up of basaltic sandstones. It's there, near the edges of the lake where lower levels of dirt are accessible, that researchers tested to see if microorganisms could have existed. In particular, they say that chemolithoautotrophs — a type of microorganism commonly found in caves on Earth — could have existed in the lake's environment, breaking down the area's rocks and minerals for energy as they do on Earth. 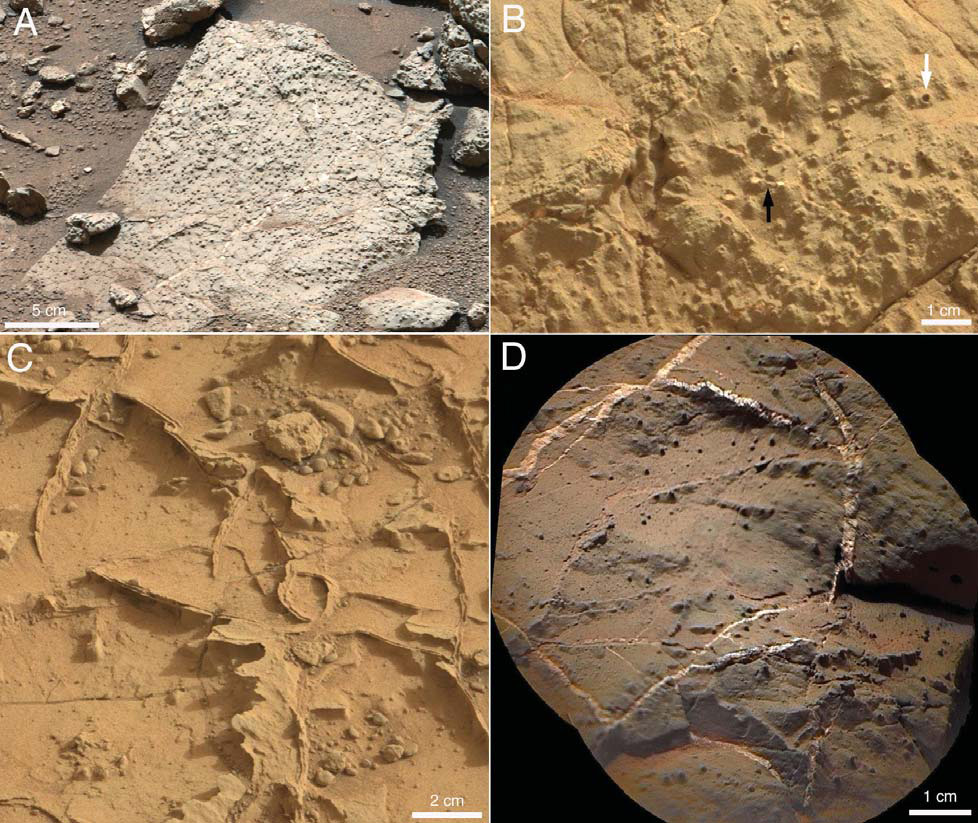 Images show a low level of strata in Yellowknife Bay known as Sheepbed. Arrows in image B point to unexplained hollow depressions in the rock. Click above to enlarge.

The Martian lake would have been around 30 miles long and 3 miles wide, or as Grotzinger puts it, "typical of a small Finger Lake of Upstate New York." The researchers say that liquid water once existed there, and they've previously speculated that it would actually have been drinkable because of its low salinity and neutral acidity level. Actual signs of microbial life haven't been observed, but researchers say that an elemental cocktail that would have supported them was certainly present.

The research was presented at the American Geophysical Union this morning, and was published today as a series of papers in Science. Grotzinger says that the next step is to look further into the presence of organic carbon — something that's present in all life here on Earth. Finding it preserved on Mars might be more difficult than other elements, but it would be an exciting finding if Curiosity can locate it. The rover is now headed to the base of Mount Sharp, where it'll again look for exposed layers of older stone that it can drill into.