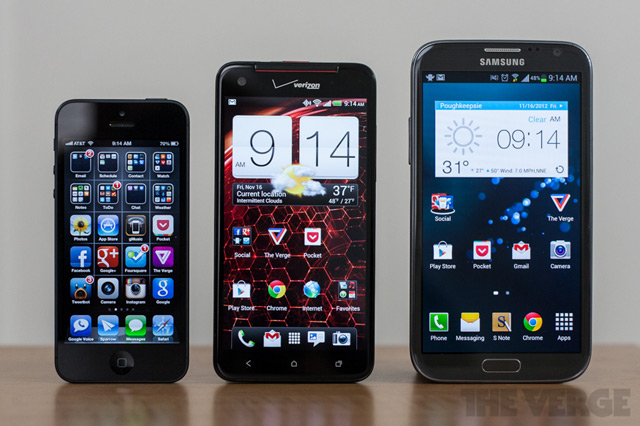 At their outset, Android handsets were a humble breed, aiming merely to emulate the iPhone and catch up with it on important software fronts like web browsing, app selection, and general responsiveness. Alongside that drive for internal self-improvement, there was a corresponding trend among handset makers to enhance and differentiate their physical products with various hardware upgrades. Motorola did very well with its keyboard-equipped Droid range, for example, while Samsung’s big investment in AMOLED display technology paid off in its popularity with saturation-hungry consumers.

For HTC, the big cutting edge feature was literally bigness. Following the great success of its 4.3-inch HD2 running Windows Mobile, the Taiwanese company took on the mantra of "bigger is better" with its Android range and has rapidly progressed past the 4.3-inch mark of the EVO 4G and ThunderBolt, through the 4.7-inch Titan and One X, to its current flagship 5-inch Butterfly model. The HD2 was the biggest phone of its time and every one of the subsequent models has led the way in giving users more screen real estate, but there’s one problem with what HTC did: everyone copied it.

LG’s best Android device at the moment is the 4.7-inch Optimus G, Sony has just started taking pre-orders for the 5-inch Xperia Z, which is matched in size by the ZTE Grand S and dwarfed by the utterly absurd Huawei Ascend Mate, a 6.1-inch enormity. With Samsung, you get a choice between the 4.8-inch Galaxy S III or the even more generously-proportioned Galaxy Note II at 5.5 inches.

Every one of the foregoing Android device manufacturers offers handsets of smaller sizes, of course, but as you move down in dimensions, the sacrifices you’re asked to make become increasingly intolerable. Samsung’s Galaxy S III Mini and HTC’s One SV are perfect examples of well-proportioned, nicely designed devices that would make great alternatives to the supersized Android flagships or Apple’s 4-inch iPhone. But consider their limited spec sheets, their lower-resolution displays, their poorer cameras, and — most importantly — their lesser chances of receiving prompt Android software updates, and you’ll immediately limit the selection of your next Android phone to the oversized pocket busters enumerated above.

Google hasn’t helped matters by making its last two Nexus handsets closer in size to a tablet than something a regular human being might consider a phone. Remember when we all laughed at the idea of making phone calls on the 5-inch Dell Streak? The ergonomic challenges of these bulky devices haven’t actually gone away just because everyone’s selling them — they’re still there and so is the demand for high-quality, high-spec handsets in the middle size range of 4 to 4.3 inches.

It used to be that Android vendors competed with one another by being different. Today, being different entails an end to this breathless chase for ever-larger numbers and a return to old-fashioned considerations like ease of use and good ergonomics. The smartphone market has ample room for large, domineering displays, but it’s also hungry for those same zero-compromise spec sheets in smaller form factors. Neglecting size-conscious, but still discerning, phone buyers is costing Android sales to the ever-present Apple alternative. Android phone makers don’t need to copy the iPhone to be successful, but neither should they fear standing up right next to it on an equal footing. If BlackBerry can be brave enough to stake its future on a 4.2-inch phone, why not Android vendors?