Streaming services buckle under the weight of Beliebers

Video streaming glitches scuppered Justin Bieber's efforts to outshine the Grammy Awards tonight. Bieber had planned to hold a live video stream to coincide with the start of the Grammys — which he failed to earn a single nomination for — where he would play new music and answer questions. But capacity problems caused by an army of Beliebers forced the star to jump from service to service in an attempt to connect with his fans.

Initially, Bieber expected to use Livestream, and tweeted a link six minutes before the show was set to begin.

But with that announcement getting over 45,000 retweets, the Livestream feed was overwhelmed with fans, and Bieber himself was unable to get into the room.

Bieber then promised to make it up to disappointed fans, teasing a new song.

since nothing is working and im super upset i feel i gotta make it up to u.i should post a new song on twitter so you can still be excited

But soon after, he announced that the live video would continue over at Ustream.

I am broadcasting live at ustre.am/4ff7 come and check it out!

Unfortunately, however, Ustream suffered the same fate, though Macleans.ca noted that some fans managed to get a glimpse of a shirtless Bieber on his bed. Others saw a video that seemed several years old, featuring Bieber with his infamous bowl haircut.

really now ustream is over capacity my fans are amazing but this is frustrating twitter.com/justinbieber/s…

Eventually Bieber stopped believing in the live broadcast dream, and uploaded an apologetic video to Telly.com instead.

He then posted a demo of a new song called "You Want Me" to SoundCloud: And, finally, showed his true feelings via a shirtless Instagram shot. 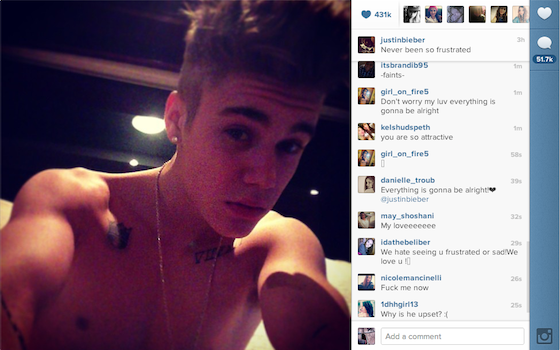 Judging by his fans' ecstatic reactions to every move he made, Bieber shouldn't worry too much about the technical hiccups causing any damage to his reputation. But it's a sobering reminder that even superstars with over 34 million followers on Twitter can't always get technology to work for them, and the services in question are unlikely to consider this the best PR.