BlackBerry announced pop music star Alicia Keys as its new Global Creative Director to great fanfare during its launch of BlackBerry 10 late last month, but if a tweet posted by Keys today is any indication, she may not be being that faithful to the new platform. The superstar was caught tweeting "Started from the bottom now were here!" from the Twitter for iPhone app this morning, despite her promise to The New York Times that she was exclusive to BlackBerry 10 now. The original tweet has since been deleted, and Keys has followed up with not an apology, but rather a claim that she was hacked and didn't post the tweet in question. It's hard to say for sure whether or not Keys is telling the truth and someone with her password decided to play a prank on her, but it wouldn't be the first time that celebrity endorsers have been caught cheating on the company that they are paid to promote. 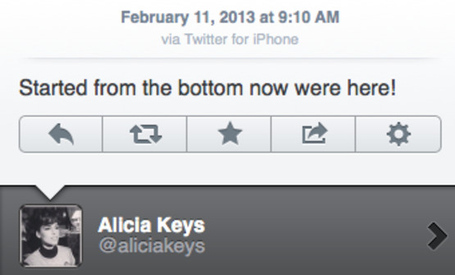 Late last year, a kerfuffle was started when Oprah tweeted a series of messages endorsing Microsoft's new Surface tablet — all from her iPad. Other celebrities have been caught promoting certain devices in music videos and the like only to be seen tweeting from competing products later on. But what makes Keys alleged offense so alarming is that she isn't just a paid promoter — BlackBerry has actually given her a title within the company and she's supposedly on its payroll.

For her part, the vast majority of the tweets posted to Keys' account have been from Twitter's web interface, which artfully masks what type of computer or device she is using to tweet. Chances are, this won't be the last time we see a celebrity use a device other than what they are promoting, or have one of their promotional team members commit a similar gaffe.