What's next for Surface?

What's next for Surface?

The Windows 8-powered Surface Pro isn't perfect, but Microsoft could be onto something

The Surface Pro launched last week to divided opinion. Unlike the Surface RT introduced in October of last year, the Pro swaps Windows RT for a full version of Windows 8 and packs a lot more power in the form of an Intel i5 chip that allows you to run desktop applications and existing games. It adds some weight and thickness to the device, but it's largely the same form factor as the Surface RT with an optional removable keyboard and a kickstand. The added ability to run legacy apps has many people wondering whether this is a tablet, a laptop, or both. So what exactly is the Surface?

Microsoft has engineered the Surface Pro into a tablet form factor, but at a cost

Microsoft has referred to Windows 8 as a "no compromises" approach to an operating system, built for desktops, tablets, and laptops. With an improved touch UI and support for legacy apps, it's designed to straddle both worlds and provide desktop and tablet computing scenarios. Whereas the Surface RT is a tablet first with good battery life, a lightweight design, and the option to use a Touch or Type Cover to do additional tasks, Surface Pro is a different beast. "We designed it as a PC first, it really was a laptop, notebook, full speed super powered computer," said Microsoft's Panos Panay at the Surface Pro launch event recently. Microsoft has engineered the product into a tablet form factor, but at a cost.

With the Surface Pro there are some clear compromises in what Microsoft is attempting to achieve. As a pure tablet device, the battery life isn’t good enough. A lack of an adjustable kickstand means it's difficult to use the Surface Pro as a laptop replacement, especially on a lap or at certain angles with the extra weight making it less stable. Even on a desk, you'll need to adjust the whole tablet or your position rather than adjust a hinge like a traditional notebook.

Some have attempted to compare the Surface Pro to the MacBook Air or even an iPad. There are some obvious similarities in specifications and use cases for both comparisons, but the Surface Pro is neither an iPad nor a laptop. Microsoft's mix of two form factors with a touchscreen is driving a conversation around the future of tablets and laptops. Gartner technology analyst Michael Gartenberg agrees. Speaking to The Verge, he says "[the Surface devices] force a different way of thinking about tablets and PCs and whether these are best experienced as a single device or two discrete ones." I wouldn't go as far to say the Surface is a new form factor, but it pushes the boundaries for traditional hybrid notebooks in a way that other OEMs have typically shied away from — is it the right direction, though?

Microsoft wants to push Surface as an alternative that can replace a laptop and iPad combo, but most people wouldn't spend $1,000 on a tablet and it's questionable that you'd spend it on a laptop replacement that somewhat compromised on that functionality. However, for some it's exactly what they want. When Apple introduced the iPad, a number of people questioned why you'd want such a device — chided as a giant iPod touch — but it sold in the millions. Like the iPad, Surface is a new category of device, not a form factor. Microsoft is aiming to warm people up to the idea of hardware that's both a tablet and a laptop. Surface sales are off to a slow start, but Microsoft clearly has to build the brand before it has a smash hit like the iPad. There’s no iPad RT and iPad Pro to choose from either; there’s a clear message from Apple on the iPad’s capabilities at the very outset. Microsoft still needs to work on its marketing in this area, to avoid confusion between the two. 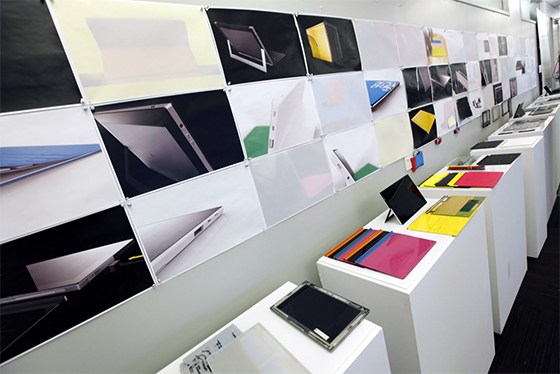 OEMs are trying the same thing with Windows 8, but there is no perfect alternative to a laptop and tablet combination. These separate devices simply do things better on their own, compared to the usual hybrid laptop. Surface comes the closest, but it's just a start. If, as Microsoft claims, the Surface has been in development secretly for years, then you'd have to assume that the company has the next-generation on the way. Has it considered an adjustable kickstand? The prototypes pictured above suggest so. Is it testing battery-equipped covers? It sure looks like it. Microsoft’s Panos Panay has even hinted, during a recent ABC News interview, at a "good selection" of "pretty exciting" products that the company has been working on. Microsoft is building a production line in China, and it makes sense that the company would seek to extend this to additional devices, perhaps even a phone.

Is there a Surface laptop or mini version on the way?

Ross Rubin, principal analyst at Reticle Research, says he expects Microsoft’s next device to be more mobile, perhaps a smaller tablet or the smartphone form factor. "That's where the growth is," he notes. While Microsoft largely refuses to comment on 7- and 8-inch Windows tablets, Mary Jo Foley at ZDNet believes Microsoft should be looking at that market. "They should do a Surface Mini with a 7-inch or 8-inch screen," she says, noting that a Surface laptop and more tablet options are good ideas. "Hybrids don’t provide the best of either world," says Foley. "It’s too much of a compromised device." Ed Bott, a technology writer at ZDNet, says he’d be shocked if Microsoft wasn’t prototyping a Surface laptop, but that OEMs are keeping pace. "I would not be surprised to see them partner with Dell on a best-in-breed corporate laptop," he speculates, thanks to an even closer relationship between the two companies.

A Clover Trail tablet or laptop would make a lot of sense for a future Surface product. I have personally been testing Samsung’s Ativ Smart PC recently, and aside from the performance limitations in gaming it's surprising Microsoft didn't opt for this Intel chip over ARM and Windows RT for its original Surface tablet. Intel's Clover Trail offers great battery life in a slim profile, with the addition of full legacy app support. For most people that would be enough for this type of device, and having 10 hours of battery life and a full desktop OS would make Surface a killer offering. "Surface needs to evolve in terms of form," argues Gartenberg, noting that battery life needs to improve on the Pro model despite it being comparable to other ultrabooks. For now, we’ll have to imagine a future where power and battery life are equally great.

Microsoft has a real opportunity to define the hybrid space

So what is the Surface? It's a start, it's a nudge, it's a step in the right direction. Is it perfect? No, but for a lot of people the Pro might be enough in its current form. An ideal Surface is one with the same power as the Pro in the same form factor as the RT with 10 hours of battery life, an adjustable hinge, and a sturdier detachable keyboard cover. Surface RT, Surface Pro, and Windows 8 are just the beginning as Microsoft tries to fuse two form factors and two computing scenarios into one package. That package is still in transit, but if Google and Apple don’t explore the same path, then Microsoft may be uniquely positioned to own this new market once it truly nails it. Of course, Microsoft had a similar opportunity over 10 years ago, but we all know how that turned out. It's time for Microsoft to make its mark in the post-PC era.

More from this stream Surface 2 rumors: specs, accessories, and more