Amazon leapfrogs Apple and Google to become most respected company in the US, says report

Amazon leapfrogs Apple and Google to become most respected company in the US, says report

Last year Harris Interactive listed Apple at the top of its 13th annual Reputational Quotient survey, with Google right behind and Amazon in fourth. It's all changed this time around, however, with Jeff Bezos' online giant claiming the crown of the most respected company among American consumers. Apple is now second on the list, and Google has dropped down to fourth place behind the Walt Disney Company. Johnson & Johnson rounds off the top five, Microsoft ranked 15th, and, following its IPO last year, Facebook made its first appearance at 42. The results come from online surveys answered by over 14,000 people.

Apple's placing last year represented the highest ever "RQ" score that Harris Interactive had ever recorded, but the company has dropped over three points to 82.54 in 2013. Amazon scored 82.62 to take this year's top spot by a narrow margin, and Google managed 81.32; while both improved on their 2012 scores, neither would have beaten out Apple's record of 85.62. Speaking to Yahoo Finance, Robert Fronk of Harris Interactive attributed Apple's lower score to its dropping stock price. 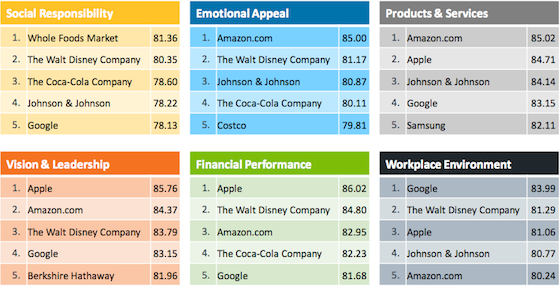 Harris Interactive calculates reputation across six "dimensions," and we see different tech companies performing well in different areas. Amazon was the number one brand in emotional appeal and products/services, whereas Apple is the leader in vision/leadership and financial performance — despite its falling stock. Google, meanwhile, ranks highest in workplace environment, and at number five was the highest-placed tech company in social responsibility. Overall, the technology industry appears to have the best reputation of any among consumers, garnering a 79 percent positive rating.