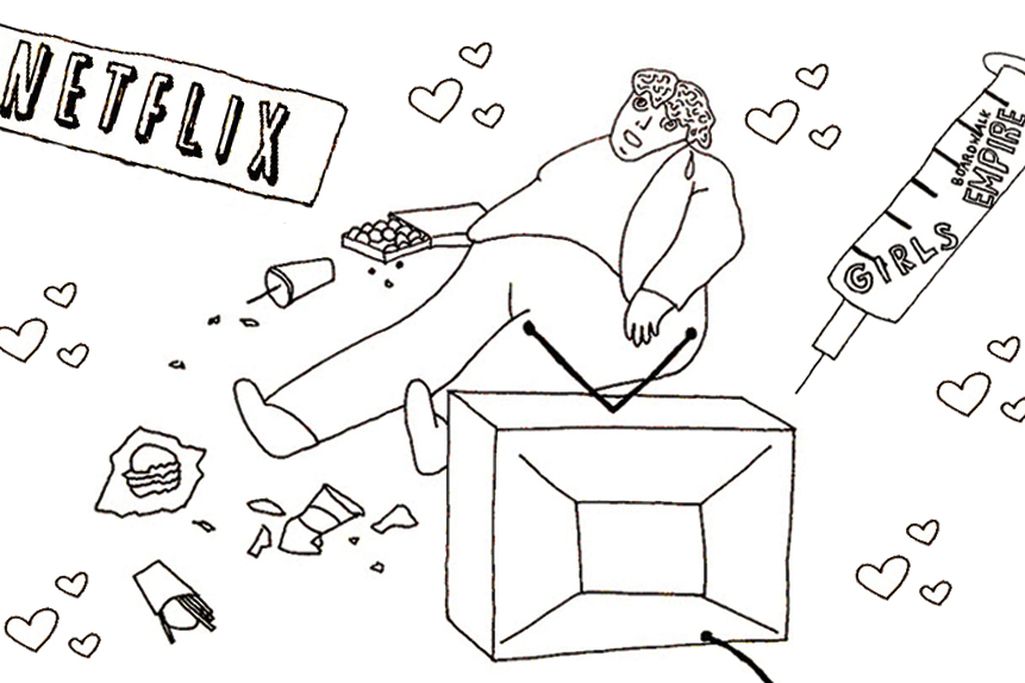 It all happened so quickly.

Just a few months ago I was another one of those “I don’t watch much TV” guys. I’d hit the awards show circuit for sure, maybe do a Netflix or three on a rainy day, passively consume an hour of CNN at the airport Chili’s Too, whatever. The last time I followed a serial show was in 2002 with Six Feet Under but that was because we got a free year of TV with our internet and when it expired so did my relationship with the show. Before that Ren & Stimpy which essentially made me the person I am today.

Twenty years later I find myself being shaped once again by the programming I consume but this time I have the ego to observe myself falling into profoundly unhealthy k-hole. Like a lot of other people I’ve already watched all thirteen episodes of House of Cards. The Netflix-exclusive political thriller starring Kevin Spacey and directed by David Fincher debuted two weeks ago, all thirteen chapters of the exquisitely-produced first season landing in the laptops, Nintendo DS’s, and living rooms of subscribers at the same time. 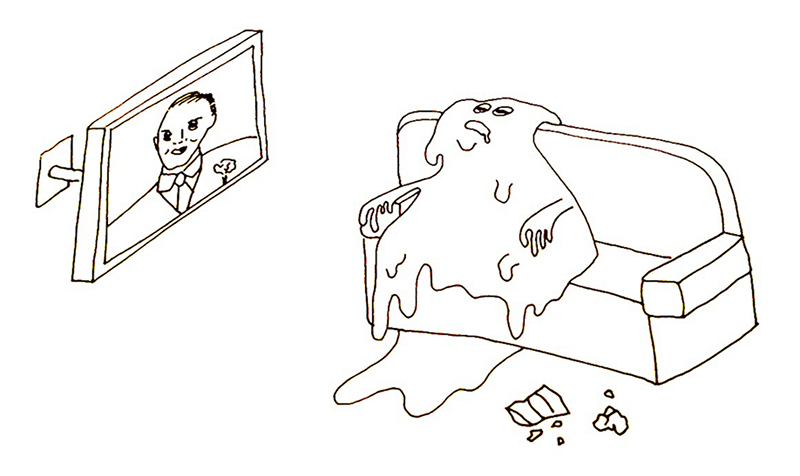 The show’s release was perfectly timed to feed an insatiable addiction to serial TV that began in late September. It wasn’t my fault. For the first time in my adult life I had been completely felled by the flu, unable to move beyond the confines of my bed. Even the laptop was hard to look at without puking. Bored, I began to dig through the free stuff on Netflix, where I found the first season of Downton Abbey. Twenty-four hours later I had consumed it all and was so anxious to experience World War I with the Granthams that I didn’t even have the patience to torrent Season Two so I gave Apple $19.99 and another day later we had mercifully survived to celebrate Christmas 1920 in style. Better yet, Matthew’s long-awaited proposal to Lady Mary lifted my spirits profoundly and empowered me to shake off my sickness, bound no longer by the plentiful programming or chronic diarrhea.

Life went on, and I still wasn’t much of a TV guy. The flu had given me a reason to plow through a lot of TV at once and I viewed it as an isolated incident, not a character trait. But in November another occasion to binge came around, innocuously enough at first. I was facing a twelve-hour layover coming home from Thanksgiving vacation, which normally would have been spent wandering back and forth between the Chili’s bar and the women’s lifestyle section of Hudson News, but this time I was completely broke, which left the normal prospect of blacking out in a pile of Teen Vogues out of my price range. Poverty usually breeds innovation but all my overstuffed brain could come up with was to torrent the first season of Boardwalk Empire, which had caught my eye due to a lifelong obsession with Steve Buscemi. Where Downton had been my cannabesque gateway period piece, Boardwalk Empire was the narcotic that shoved me down the hole and this time there was no turning back.

Two more seasons of prohibition-era Atlantic City were followed by a wave of modernism: Homeland didn’t possess the Scorsese-directed opulence I was accustomed to but Claire Danes’ psychotic career as a terrorism pre-cog was a very suitable surrogate that kept me rolling through twenty-four more suspenseful hours of content. I returned to HBO for Girls, which my roommate had been casually referencing long enough for my FOMO to kick in; now I’m caught-up enough to appreciate the avalanche of awkward animated Hannah Horvath sex GIFs that hit the feeds every Monday.

While my other TV binges were ostensibly plot-driven, Lena Dunham’s situational rom-com felt like some sort of warped stroll down memory lane, and sometimes I got bored of it. The half-hour episodes feel like a breezy palate cleanser between more substantial courses, the wacky characters understandable by anyone with a few minutes to spare and a thirst for millennial awkwardness. Although keeping up with Girls allows me to participate in the water-cooler conversation its weekly stroll through post-graduate Brooklyn engenders, the series feels wholly unessential in a sea of otherwise highly-sequential page-turners. For that week before House of Cards premiered it felt like I was on some sort of weak tincture of television: my habit was merely sustained, nowhere close to being fulfilled.

Whether it was intentional or not the people at Netflix did a really good job of making their new show essential before it even began. Lilyhammer, its first venture into exclusive programming, wasn’t developed specifically for Netflix; it was a series that had already been produced, in Norway, and the streaming service bought it and branded it in an attempt to test the waters of a new programming paradigm. The idea was intriguing because it was free and legal to subscribers and because it had a nebulous attachment to Robert De Niro; in the end people didn’t flock to it because it was super-boring, I think.

But a brand-new series from the guy who did The Fight Club With The Social Tattoo and a bloody-handed Keyser Söze in the ad campaign would undoubtedly be anything but boring, and the prospect of having thirteen chapters of feature-quality television available to everyone everywhere on a single Friday night was enough to send the growing class of people with addictive “if you got ‘em, smoke ‘em” personalities into a frenzy. And even if the content itself wasn’t going to blow any minds, its mere consumption would provide media analysts enough material to propel it to headlines all over the internet, as it has managed to do here.

The show itself, it turned out, was good. Although it didn’t have the apocalyptic urgency of Homeland it still tugged at my heartstrings when I wasn’t watching. As wrapped up as I was in seeing Spacey’s Congressman Underwood hack his way through his opponents to the top of the Washington food chain, I found myself even more engrossed in the new meta-concepts and macroscopic details House of Cards brings to our rapidly-weirdening economy of entertainment.

Although it’s presented in a standard “TV show” format of a serialized thirteen-chapter season, the absurdly high production values used in House of Cards make it feel like a very long feature film. Although HBO has been doing filmic programming for years, no one has ever dropped an entire season on the world quite like this. In much the way social media has allowed us a deeper look into our friends’ emotions at all hours of the day, this new generation of epic TV offers a firsthand look at how its protagonists make the decisions that drive the plot forward. I like this development a lot: it forces the audience to step into the shoes of someone whose brain operates on a completely different plane. Tony Soprano, Nucky Thompson, and Frank Underwood are all rational killers who seem to operate on the world around them with a worldview we come to understand completely even if the outcome is coldhearted and violent. In the hands of lesser artists these moral lessons would fall apart, but the magic of high-budget TV ensures that the point comes across to anyone who has the patience to sit through a season. 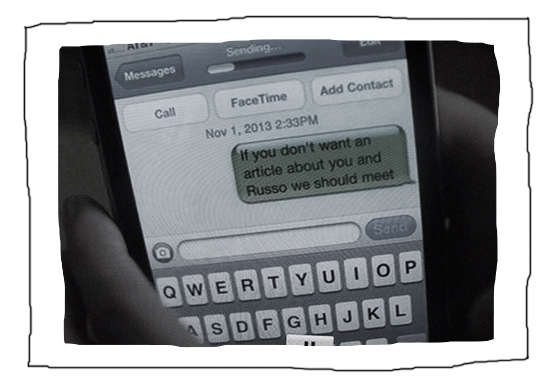 For a testament to the artistry at work in House Of Cards, we can look at Kevin Spacey’s constant monologue directed at the audience: he breaks away from the action to explain what’s running through his head – not to evolve the plot, but to tell us why he’s making a decision. Frank Underwood will never cause us to scream, as we sometimes do at virgins about to be slaughtered in horror movies, “WHAT ARE YOU THINKING?? DON’T GO IN THERE!” because he usually just tells us point blank why he’s going in there. If this narrative device were attempted by an under-funded production it would feel like a cheap gimmick, but David Fincher’s Capitol Hill and the staffers therein are executed with the clinical precision they were hired for, so the gimmick works. It works so well, in fact, that when the Congressman stops talking to the camera in the profound darkness of chapter eleven, we understand he’s plotting something so evil that even his ruthless conscience doesn’t want to acknowledge. When that fourth-wall confessional goes silent, we don’t have to hear what’s going on in his mind: we can feel it, which is an emotional brand of Hemingway-esque objective epitome that I’d never experienced before. Although Buscemi’s Nucky Thompson destroys less discriminately than Frank Underwood, I understand that Underwood is the far more immoral person: his depraved silence speaks volumes.

A primary reason the House of Cards universe is so convincing is its surreal representation of the way real people communicate in 2013. Much as they do in Girls (and the rest of real big-city America), everyone uses an iPhone, except when they don’t, and when they don’t, it’s for a reason. Frank prefers a BlackBerry just like a real congressman and tells his media cohort Zoe Barnes to “use a burner” for their illicit exchanges. Mercifully gone are the days of fairytale OS’s and phone numbers that start with 555: even the notification sounds are sculpted to ooze reality. The ringtones are really fucking good in this show, and Fincher knows he’s directing for a streaming audience that will appreciate them. Actually, David, while I’ve got you here – we need to see more Android next season, or your reality might begin to crack a little bit.

There’s also the whole “who will be the next HBO” thing going on, and from this couch it certainly feels like Netflix has taken the title. It feels bizarrely wholesome to watch HD television I don’t have to worry about getting a cease-and-desist letter from Time Warner Cable about, and the eight dollars a month I pay for Netflix is so embedded in my monthly budget that it feels like I’m not really even paying to watch House Of Cards, which I guess makes me the holy grail of subscription models. It still feels kind of cool / weird to see “A NETFLIX ORIGINAL SERIES” before each finely-wrought chapter begins, and the fact that they’re called “chapters,” not episodes, kind of makes me feel smart like I’m reading a book and not watching television.

Maybe I am being naive but it does feel like there’s a reason my addiction is playing out right now: there’s a lot of good TV in the air, TV that does feel like reading a book and seems like edutainment on a higher moral plane. As production and delivery methods become more and more nuanced I hope the national water cooler conversation will be elevated from mere gossip to something a little more like book club chat. All of these shows deep-dive into worlds full of terrible people where a clear enemy almost never arises: maybe this new level of emotional detail will become the standard. Maybe our TV will help us describe our interpersonal politics on a higher level. If this is the case, I can see these shows as the curriculum of a “Great Books” higher education for a future population too ADHD to read a book.

If that’s not the case, then it could just be another vehicle for me to use flowery language and hazy logic to explain away my TV addiction as something more useful than it really is: a gigantic waste of time. Speaking of, I have a Temple Run 2 game I need to get back to so bye.