Gartner today released its quarterly report on the state of the global smartphone market, largely confirming trends that were reported by IDC late last month. According to the research firm, Apple and Samsung continue to dominate the global smartphone market, with a combined market share of more than 52 percent, while third place remains up for grabs.

Samsung retained the top position in the smartphone market, with Q4 2012 sales totaling 64.5 million units, up 85.3 percent from the previous year. Apple, meanwhile, saw its sales reach 43.5 million units last quarter, up 22.6 percent from Q4 2011. This duopoly extends to the OS level, as well. Android widened its lead last quarter, with nearly 145 million units sold, of which Samsung alone comprised 42.5 percent. Overall, Google's OS commanded a staggering 69.7 percent of the market last quarter, up from the 51.3 percent it comprised in Q4 2011. Apple's iOS, by contrast, actually saw its market share drop from 23.6 percent in Q4 2011 to 20.9 percent last quarter, though it remains well ahead of other competitors.

"There is no manufacturer that can firmly lay claim to the No. 3 spot."

It's in third place where things get really interesting. Huawei's strong performance pushed it to the third spot for the first time in Gartner's report, with the Chinese manufacturer selling more than 27 million handsets in 2012, up 73.8 percent from 2011. Yet given Samsung and Apple's growing dominance, Huawei's hold on third place is tenuous, at best.

"There is no manufacturer that can firmly lay claim to the No. 3 spot in global smartphone sales," said Anshul Gupta, principal research analyst at Gartner. "The success of Apple and Samsung is based on the strength of their brands as much as their actual products. Their direct competitors, including those with comparable products, struggle to achieve the same brand appreciation among consumers, who, in a tough economic environment, go for cheaper products over brand."

Gartner's statistics only underscore this disparity. BlackBerry, for instance, currently sits in third place among smartphone vendors on the OS level, though with just 3.5 percent of the market, it remains far behind second place Apple, and only slightly ahead of fourth place Microsoft, which controlled 3.0 percent of the market last quarter. 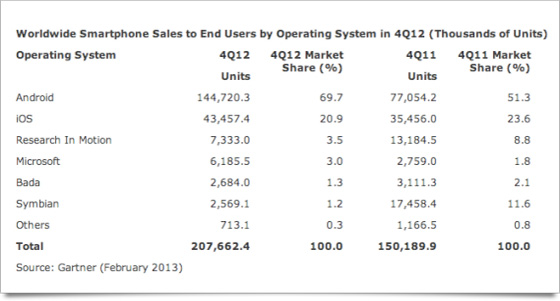