Fighting dirty: Microsoft’s mean ‘Scroogled’ ads are a sign of what's to come

Fighting dirty: Microsoft’s mean ‘Scroogled’ ads are a sign of what's to come

Microsoft just came out with the second phase of its "Scroogled" campaign, a series of fearmongering attack ads aimed at Google that are very similar to the political attack ads that flood the airwaves during election season.

Dramatic voiceover. Vague implications of danger. Damning clips of the opponent saying something stupid (thanks, Eric Schmidt). "Email between a husband and wife or two best friends should be completely personal," a smooth-voiced announcer says in one spot. "But Google crosses the line and goes through every single Gmail."

As is typical when political campaigns go negative, there was a bit of a backlash. Critics say Microsoft is spreading FUD — fear, uncertainty, and doubt — when it should be focused on building great products that can compete with Google on quality. "What I don’t get is why Microsoft feels the need to run such a negative campaign," tech blogger Frederic Lardinois wrote at TechCrunch.

In other words, why does Microsoft have to be so mean?

This isn’t the first time Microsoft has swiped at Google, nor is it the first time one monster tech brand has poked at another — take the "I’m a Mac, I’m a PC" ads, or Samsung’s pillorying of Apple. Oracle was recently sanctioned for a botched attempt to smear IBM, and Google was quickly criticized when a Motorola ad bashing Apple’s maps turned out to be using a nonexistent address. But for the most part, tech brands stick to positive ads.

That may be changing. There’s a reason Microsoft’s new attack ads have started to resemble political ads, and we’re likely to see a lot more of them. In July, Microsoft hired longtime Democratic political operative Mark Penn, best known for running presidential campaigns for both Bill and Hillary Clinton. Penn, who first started advising Microsoft in 1998, now holds the murky title "corporate vice president for strategic and special projects." His job is to push lagging products, primarily Bing, using his corporate "SWAT team" and the rapid poll-and-response advertising tactics he honed in politics. 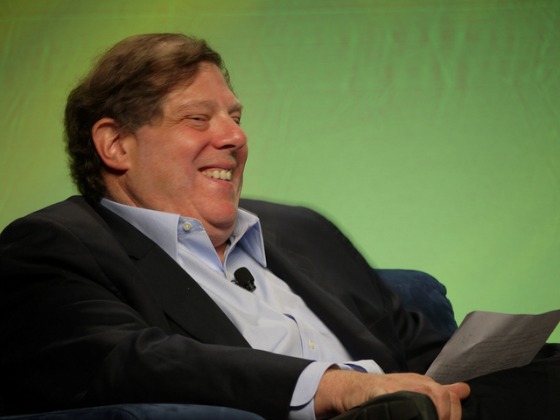 Penn is known more for aggressively surveying a market, slicing it into glib segments like "soccer mom" and "active granny," than he is for negative campaigning. He was also behind the heartwarming "blue sweater" Microsoft ads in 2000, which featured Bill Gates giving a fireside chat style speech in an attempt to restore trust in the company as it was being accused of antitrust violations.

But while he’s no Larry McCarthy, Penn has done his part to spread FUD. In 2008, Penn encouraged Hillary Clinton to emphasize her opponent’s foreignness, allude to his past drug use, and imply that he was too inexperienced to protect the nation. Penn's old firm, Burson-Marsteller, was also behind a Google smear campaign ordered by Facebook in 2011.

"Sometimes you do have to be a little more provocative."

"There is so much noise in the media space now about everything, that sometimes you do have to be a little more provocative, especially when you are talking about something as dry as algorithmic versus organic page results," said Stefan Weitz, senior director of online services at Bing.

Then he said something that sounded straight from a politico’s playbook: "'The everyday consumer doesn’t look at speeds and feeds anymore. They look at how a product makes them feel, and whether it aligns with their values."

The positive side of negative ads

Voters say they hate negative advertising, but the tactic works — which is why negative political ads have been on the rise over the past 50 years, according to John Geer, a political professor at Vanderbilt who studies campaign advertising and wrote the book In Defense of Negativity: Attacks Ads in Presidential Campaigns.

On average, negative ads are more issue-focused and feature more facts than positive ads, he said. And while negative ads tend to be exaggerated, they’re still shining a light on something that’s essentially true — in this case, Google’s monitoring of Gmail and only allowing paid results into Google Shopping. 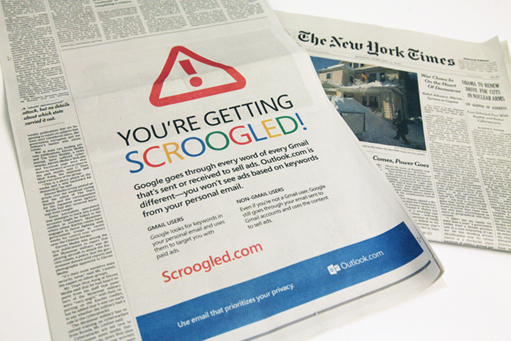 Some of Microsoft's anti-Google newspaper ads.

"Product ads are not usually as negative as political ads," Dr. Geer said. "Microsoft is taking a gamble here by criticizing Google. But one of the things they’re doing that’s true of most attack ads is, they’re telling the truth. It’s not like they’re lying. It’s informing the marketplace."

It’s true that Google’s shopping results are now all paid, and it’s true that Google scans the content of emails in order to target ads while Outlook does not. But the Scroogled ads make it seem as if nameless human workers are reading through emails, which is much more rattling than the truth.

We may start to see more negative campaigning around tech...

Microsoft was a bit more candid in a poll of more than 1,000 people conducted by GfK Roper, a research firm that also does polling for the Associated Press. The results of that poll showed s that, surprise, most users don’t know what’s happening with their data.

"As far as you know, do any major email service providers currently scan the content of personal emails in order to help target the online advertisements they show to people?" was one of the eight questions asked. Even though Gmail has monitored email content ever since it launched, 46 percent of email users said no. Another 19 percent said they didn’t know. Then, 90 percent of email users said they thought the practice should not be allowed.

...and that’s not necessarily a bad thing

We may start to see more negative campaigning around tech products, Dr. Geer told The Verge, and that’s not necessarily a bad thing. "If they realize there's money to be made by being a bit more negative, they will," he said. "And the end result is the American public being more informed."

Letting Google and Microsoft criticize each other could end up keeping both companies more honest, considering there is widespread ignorance of how the products and spotty scrutiny of the tech sphere coming from regulators.

However, Microsoft isn’t being totally straightforward in its anti-Google ads, said search engine expert Danny Sullivan. "Unfortunately, Bing is hardly in a position to be lecturing Google about poor disclosure and charging for listings, when it has the same issues," he wrote in a blog post dissecting the Scroogled claims.

Google recently made a big change to Google Shopping that many consumers may not have noticed if Microsoft hadn’t pointed it out in an ad that ran on at least three of the major cable networks in the month leading up to Christmas.

Inclusion in Google Shopping results used to be free, just like in Google’s web search. But in September, Google started requiring merchants to pay to be listed — meaning vendors that didn’t pony up disappeared from the results. Microsoft jumped on this change for the first installment of Scroogled, claiming that Google Shopping results could be excluding the best prices or best products. "For an honest search, try Bing," the ad says.

The differences between the two shopping search engines turn out to be more nuanced. The order of results doesn’t matter as much as with web search; if multiple vendors are selling the same exact product, the differentiating factors are limited. When ranking results, Google considers things like price, relevance, and reviews in addition to payment. 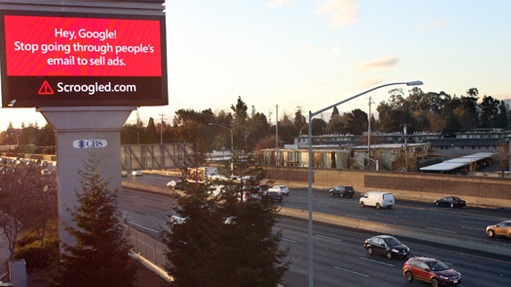 A billboard near Google's headquarters in Mountain View.

What matters more with shopping results is inclusion, or which vendors show up in the results at all. Amazon does not pay Google, for example, which means Amazon listings only show up in Google Shopping if they’ve been submitted by a third party.

But is Bing really any more honest? Bing doesn’t require merchants to pay in order to get listed (perhaps because Bing doesn’t have as much clout as Google yet) — there are ways to get into Bing’s results for free. However, merchants can pay to ensure inclusion by signing up with Bing affiliate Shopping.com — meaning an unknown percentage of Bing’s results are also pay-to-play.

But is Bing really any more honest?

"Yeah, I don’t know that I come away thinking that Bing is necessarily being more transparent about this," Sullivan told The Verge. "When they try to present something as black and white — ‘Google is doing it wrong and Bing is doing it right’ — then you don’t know whether you trust them at all."

So far, it seems like Google doesn’t want to give the Scroogled campaign any extra exposure, issuing two boring, brief statements in response to each of the attacks.

In response to the shopping ads, Google said:

Google Shopping makes it easier for shoppers to quickly find what they’re looking for, compare different products and connect with merchants to make a purchase. With 360-degree, interactive product images, social shopping lists and a fast growing inventory of more than a billion products worldwide, Google is a great resource for shoppers to find what they need, at great prices.And in response to the Gmail ads, Google said:

Advertising keeps Google and many of the websites and services Google offers free of charge. We work hard to make sure that ads are safe, unobtrusive and relevant. No humans read your email or Google Account information in order to show you advertisements or related information. An automated algorithm — similar to that used for features like Priority Inbox or spam filtering — determines which ads are shown.

However, Google may be forced to engage if Microsoft continues its crusade — which could be good for consumers, considering how these companies play a significant and growing role in our lives. All this publicity raises public awareness and forces big brands to defend their policies. Microsoft and others criticized Google for privacy violations at this time last year, prompting the company to respond with a straight-forward "myth busting" blog post addressing privacy concerns.

"The campaign is negative," Sullivan said. "It doesn’t mean that it's not a good point."

More from this stream Scroogled: the Microsoft attack ads that treat Google like a political opponent