The existence of a Google Now widget was leaked on the official Nexus support pages just days ago, and now a new version of Google Search for Android has been released that adds the feature and quite a bit more. According to the app's changelog, the update includes movie ratings from Rotten Tomatoes and will also provide real estate listings from Zillow when users are looking for a new home. Users that buy movie tickets through Fandango will now be reminded when to leave for their showing, and Google Now will provide a QR code for the tickets so they can be scanned in at theaters. US users will also see a music button when a song is playing and they're in voice mode. Collegiate athletics in the US are now also included in Google Now's assortment of sports teams as well (cards for college teams have been sporadically popping up for some users over the past few weeks, but now it's a highlighted feature).

Firing the widget up made its utility immediately apparent, as it auto-populated calendar appointments, shipping information, and weather information right out of the gate. If you'd like to try it for yourself, the update is available now. 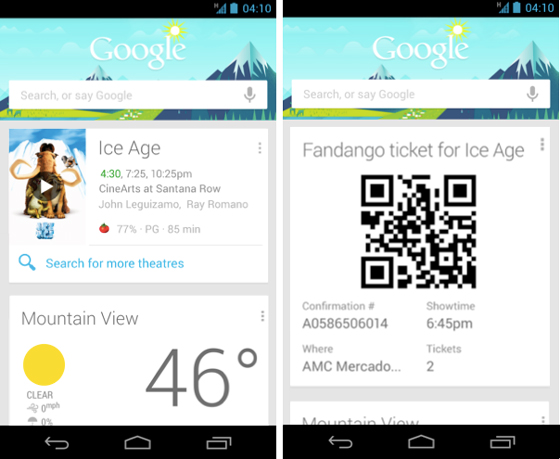