Nvidia CEO: 'I believe in tablets wholeheartedly,' but smartphones will take a little longer

Nvidia CEO: 'I believe in tablets wholeheartedly,' but smartphones will take a little longer

Tegra has made a name for itself, but LTE is no longer optional

Nvidia CEO Jen-Hsun Huang sure loves his slates. "Yes, I believe in tablets. I believe in tablets wholeheartedly," he told investors this afternoon. The company co-founder has good reason to say so: Nvidia's Tegra line of mobile processors, which appear in Microsoft's Surface RT and the Google Nexus 7, have driven record results. Today, the company's reporting earnings of $4.28 billion dollars for the year, a 7.1 percent increase from last year, in spite of a weaker PC market. For Nvidia, tablets have been the delivery mechanism for those mobile processors, and Huang says that will continue to be the case: on the company's Q4 investor call, he talked up the potential of both Android and Windows RT tablets — but not smartphones — in the near future.

"Though people have been skeptical about Android tablets," Huang began,

We've stuck with it... we believed in the Google cloud. We believe that people will buy books and music and games and movies and store their photographs up in the cloud. When you put all your personal content up in the cloud you want to enjoy it when youre home, and in a larger format, which is an Android tablet.

But it sounds like Nvidia won't just be focused on Android next year. Despite consumer confusion between Windows 8 and the ARM-based Windows RT — only the latter runs on Nvidia's Tegra chips — he says that he expects the Windows RT tablet market will continue. "I believe it is strategically essential for Microsoft to be on all the processors in the world, and surely the highest volume processor," he said. "Now, whether people see Win RT as a consumer tablet or a full computer... that's yet to be determined." Either way, Huang hinted that his company will be filling orders for new Windows RT tablets soon with its new Tegra 4 chip. "It stands to reason that there are many more Win RT Tegra 4 tablets in development," he said.

"You have to do it all together, or you don't do it at all."

Now, with all the interest in mobile processors, you might wonder why tablets are the focus. Aren't smartphones an even larger, more lucrative market? Well, that's the next step, but Huang explained that his company's not quite there yet. Qualcomm made tremendous headway last year with the introduction of its Snapdragon S4 because it had an integrated LTE modem, a highly desirable feature that delivers speedy wireless data while also saving power. Nvidia is sampling its first LTE modem to tablet manufacturers, but it won't have an integrated one until later this year, and Huang admits that's the key to being competitive. "Smartphones... this is an area where we'll need to have an LTE modem to be successful. We'll have some phone success this year, but we don't expect to have a whole lot of phone design wins until we engage the market with LTE," he said.

Nvidia is no longer just a GPU firm; it's officially a mobile processor company as well. As of today, they're so important to the company's business that Nvidia has decided to break out mobile chipsets in its financial results.

That's quite a feat, and though GPUs are still the company's main breadwinner for now, Tegra could be a top brand in the mobile PC landscape — or perhaps the PC landscape, period — if desktops and laptops fall out of style. 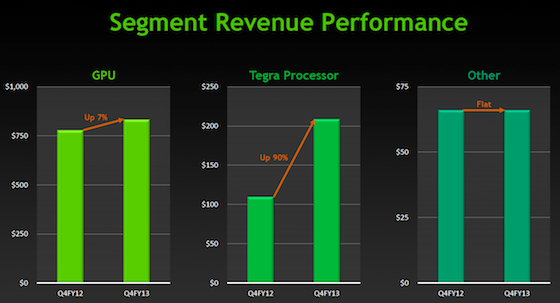