President Obama calls for a new 'Space Race' in R&D funding, but don't expect a moonshot

This year's State of the Union address evoked Cold War-era imagery to spur innovation. Can it work?

Share All sharing options for: President Obama calls for a new 'Space Race' in R&D funding, but don't expect a moonshot

The shuttle program is dead and the Cold War is over, but according to President Obama, we're on the cusp of another Space Race.

That’s the message the president sent this week, during his State of the Union address. Speaking before members of Congress just weeks after being inaugurated for a second term, the president cautioned lawmakers against cutting funding for federally-backed R&D initiatives, while urging them to bring American R&D back to levels "not seen since the height of the Space Race."

For Obama, it was a return to a well-worn analogy. The president made a virtually identical, if more pointed appeal in 2009, when he called for domestic R&D spending to surpass the levels of the 1960s. At the time, he outlined plans for R&D spending (both public and private) to reach 3 percent of American GDP — slightly higher than the 2.9 percent it comprised at the height of the Space Race in 1964.

Is this our next Sputnik moment?

Surpassing the Space Race threshold may have seemed like a bold objective on paper, but reaching that 3 percent target actually isn't so far-fetched a proposition. According to a 2012 report from the National Sciences Foundation, non-defense R&D spending accounted for 2.3 percent of GDP in 2009. Current estimates show that US spending, while rising, remains under 3 percent, but this trend belies a growing discrepancy between government and industry expenditures.

While private and public sector spending has remained relatively stable in recent years, government spending has drastically declined over the last five decades. At its zenith of the mid-1960s, R&D expenditures comprised around 25 percent of federal discretionary spending. Today, that figure hovers around 10 percent, as it has for the last decade. 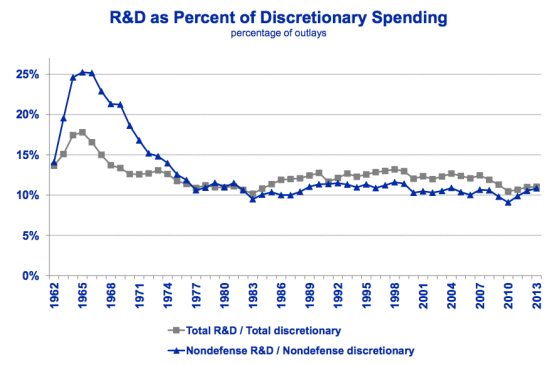 Much of this decline can be attributed to the federal government’s shifting priorities and ballooning obligations, as more money has ended up in programs like defense and medical programs, and as lawmakers have faced increasing pressure to keep taxes at historically low rates. It’s also the result of a more decentralized bureaucracy.

During the 1960s, federal R&D spending was devoted to a single juggernaut (NASA) with a clear and measurable goal (the moon). The Rover Curiosity mission to Mars rekindled some of that drive last year, but with NASA’s budget now on the decline, the US has no centralized mechanism for funding innovation. Instead, government funds trickle down to a broad range of federal agencies, nearly all of which have their own R&D budgets. As a result, Obama, like his predecessors, has had no choice but to pursue a holistic, piecemeal approach that pools both public and private efforts across a wide range of industries.

Although the private sector now comprises the majority of all American R&D spending, government-backed initiatives launched through organizations like the National Science Foundation, coupled with federal loans to forward-looking companies like Tesla and the NASA-backed SpaceX, have helped spur economic growth in nascent industries. In the past, they've resulted in new technologies that can spawn entirely new industries, as well as high returns on investment. According to a study from Battelle, a nonprofit research organization, for every dollar the US government spent on the Human Genome Project, it saw $140 return to the economy.

The administration's budget request for the 2013 fiscal year allocates $140.8 billion for overall R&D, marking a five percent increase from 2012. It also reiterates Obama’s previously stated commitment to doubling the budgets of the National Science Foundation, Department of Energy Office of Science, and the National Institute of Standards and Technology Laboratories, while expanding the government’s R&D tax credit.

Of course, "let's extend R&D tax credits" doesn’t have quite the same ring to it as "Let's put a man on the moon," and the president could use public support to get his budget passed. In an effort to garner that support, Obama and others have used Space Race language to build enthusiasm for more R&D funding. In the 1960s, American innovation was driven by a competitive desire to beat the USSR. Today, innovation advocates are trying to apply the same logic to emerging economic powers like China.

"As a share of GDP, our public and private sector investments combined remain below 3 percent, while nations like Japan and South Korea are nearing 3.5 percent and look to continue to rise," says Sean Pool, a science innovation policy analyst at the Center for American Progress. "And even China, though its combined public and private investment level is low at 1.5 percent, is on a steep path that could meet or surpass that of the US in short order." 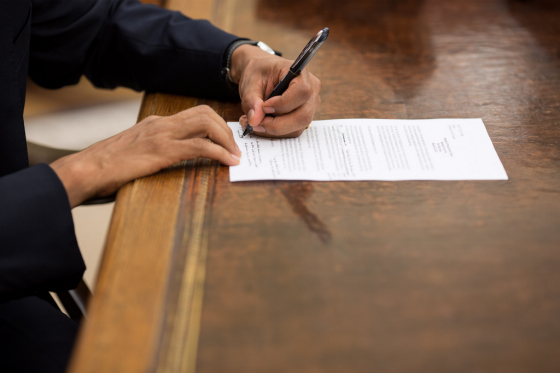 But the tougher sell for Obama may be to Congress, rather than the public. In his first term, Obama faced strong criticism from Republicans over the bankruptcy of Solyndra — a solar panel manufacturer that had received more than $500 million in federal loans. The event quickly escalated into a national controversy, with Republicans accusing the White House of recklessly pushing the loan through for political purposes. It has since become a central part of the GOP’s argument against government overreach, and one that has arisen whenever the White House pursues federally-backed private sector initiatives.

Obama will also have to contend with a Congress still fiercely divided over fiscal negotiations and facing the threat of automatically triggered budget cuts. During the 1990s, then-President Bill Clinton managed to double the budget of the NIH, even under a GOP-controlled Congress. If Obama succeeds in doubling funding for the three agencies identified in his proposal, it would be roughly equivalent to the boost the NIH received two decades ago.

There has been general bipartisan agreement when it comes to funding large institutional research organizations such as the NSF, but to push his full proposal through Congress, Obama will have to strike a careful balance between government support and perceived overreach. Swaying too far to the federal side will draw Republican opposition, while drifting in the other direction could jeopardize R&D funding at a time when domestic job growth remains sluggish.

Such a calculated approach may not be as sexy as a moonshot, and it probably doesn’t warrant a Space Race metaphor, but it’s undoubtedly more appropriate for today’s Apollo-less political landscape — and it may be the only way for Obama's agenda to see liftoff.

T.C. Sottek contributed to this report.