Tesla Motors CEO Elon Musk promised to refute a negative New York Times report on the Model S electric car, and today he's followed through with a lengthy blog post that counters John Broder's "factually inaccurate" criticism. The post includes data that Tesla logged during the test drive, and Musk uses it to make the case that Broder's piece was fuelled by an anti-EV agenda. "We were played for a fool and as a result, let down the cause of electric vehicles," says Musk. "When the facts didn't suit his opinion, he simply changed the facts."

"When the facts didn't suit his opinion, he simply changed the facts."

Broder, for his part, has responded to Musk's earlier allegations and explained some possible points of contention in a Times blog post. He said that Musk telephoned him before the article went up to offer "sympathy and regrets" about how the drive had gone, and to say that East Coast charging stations should be 140 miles apart rather than 200. 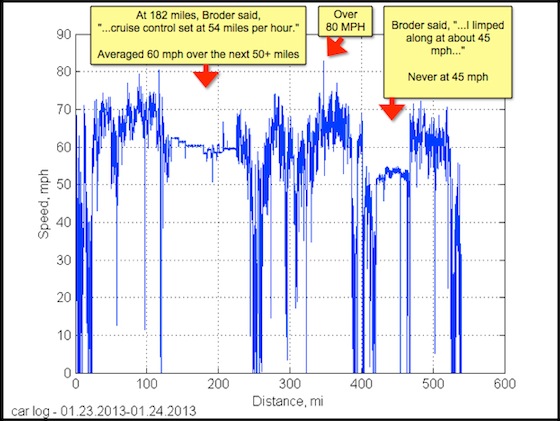 Musk says that phone call was intended to apologize for any inconvenience in the hope that Broder had made "honest mistakes," but casts doubt over that possibility by linking to the reporter's previous work on the subject. Broder wrote last year that "the state of the electric car is dismal, the victim of hyped expectations, technological flops, high costs and a hostile political climate."

@satinsilence Wow, no surprise that Broder wrote a hit piece on Tesla. I guess we were pretty dumb to agree to an article by this guy.

"Investigate this article and determine the truth."

The claims made by Musk are incredible, and it's clear that at least one party isn't telling the whole story — whichever side you choose to believe. Musk now wants the New York Times to "investigate this article and determine the truth," though the paper has already told The Verge that it stands behind Broder's report as "completely factual." The Tesla CEO believes, however, that "what is at stake for sustainable transport is simply too important to the world to ignore."