Share All sharing options for: Bump update for Android and iOS lets you send files from your phone to your computer

Bump for iOS and Android has expanded its feature set over the years since its origins as an app meant for quickly sharing contact information between phones. Users can "bump" to share photos and files from Dropbox between handsets, and the app also lets you bump photos from your phone to your computer after a quick location-based setup process. Now, an update to Bump is going to expand the latter functionality quite a bit: users can bump a wider variety of files beyond just photos from their phone straight to their computer. The update hasn't rolled out just yet, so we're not sure exactly what types of files are supported, but the app will pull up a file browser-style window to let you pick things to send — based on the screenshots, it looks like it will be similar to the interface for sharing photos and files from Dropbox between phones. There's a notable limitation — only files up to 20MB in size are supported — but its still a nice expansion of the previous photo-sharing feature

The update has also enabled two-way syncing — now, users can send files from their computer to their phone, not just from the phone to the computer. Files that get sent from a computer are stored in the Bump app itself (in iOS) or in a specific Bump folder on an Android phone's SD card (we're not sure yet how exactly it works if your phone doesn't have SD storage). Regardless, Bump's photo-sharing features work pretty well, so we're hoping that the file-sharing features do the same. The new Bump app for iOS and Android hasn't yet rolled out to Google Play or the iTunes Store, but it should be available any time now. The Bump homepage just went down with a note that says "something awesome is coming soon," so we expect everything to be ready before too long. 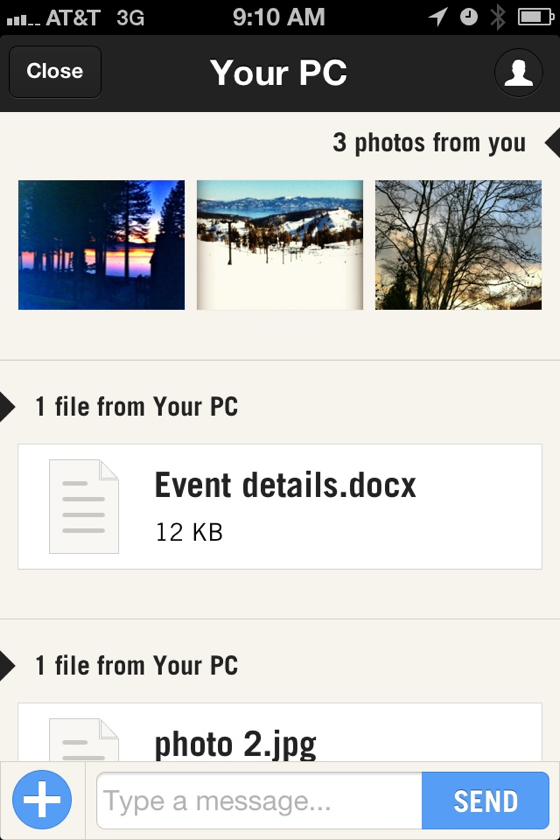