Leading online poker site PokerStars has made an offer to buy a physical casino in New Jersey's Atlantic City, a collision of worlds that would represent the first time an online poker company has acquired a brick-and-mortar counterpart in the US.

Boardwalk-situated The Atlantic Club has been losing money, posting a $13.6 million operating loss in the first three quarters of 2012. PokerStars' intervention looks like a lifeline for the struggling casino, which has accepted the undisclosed offering price. For the online poker company, it's a way to take advantage of a proposed state law that will likely allow casinos to add online gambling operations within the year.

PokerStars' intervention is a lifeline for the struggling casino

The move would also signify PokerStars' first step back onto US soil after the Justice Department shut down the three major poker sites in April 2011. That's making local regulators nervous — PokerStars still needs to get a license from the Division of Gaming Enforcement and the Casino Control Commission, the two agencies that regulate Atlantic City’s $3 billion gambling industry.

Industry analysts told the Press of Atlantic City that PokerStars could face an uphill battle as regulators look at the company's previous clash with US authorities. PokerStars was one of the three poker sites that was raided on what poker players refer to as "Black Friday" almost two years ago, settling with the Justice Department for $731 million. PokerStars' parent company, the Rational Group, also bought out its former competitor Full Tilt when the latter was revealed to be short on funds to pay players 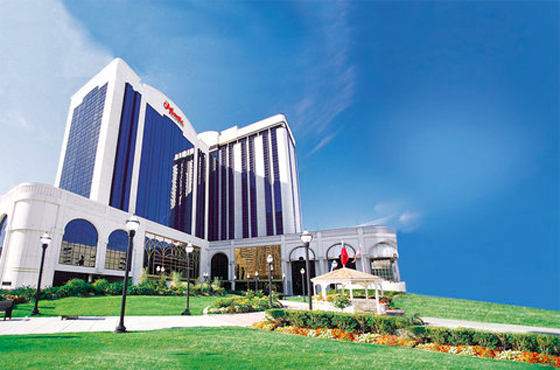 New Jersey regulators will want to tread lightly to ensure that granting PokerStars a license to operate in the state won't somehow violate the settlement or run afoul of federal law, which is still murky on the question of online gambling.

The Rational Group has now filed for an "interim casino authorization," the first step in taking over The Atlantic Club while regulators begin their due diligence. The Division of Gaming Enforcement has up to 90 days to recommend approval or denial. The Casino Control Commission then has 30 days to vote on the license.

New Jersey is shaping up to be a very friendly state for internet poker players. Last week, Governor Chris Christie conditionally vetoed the state's internet gambling bill, which sounds bad for online gambling supporters but actually isn't. The bill's authors just have to add a provision that says the bill is only valid for ten years, along with some enhancement of anti-problem gambling measures, and the governor will sign it. The bill allows Atlantic City casinos to offer online poker and other games to residents of the state.

"In reality it was a conditional acceptance," Rich Muny, vice president of player relations at the Poker Players Alliance, wrote in a victorious email to the association’s members.

Online poker has other powerful supporters. "It is great to see a modern, global company like PokerStars interested in investing in our state and teaming up with one of the iconic Boardwalk casinos," state senator Ray Lesniak told NorthJersey.com. "These kinds of opportunities can be transformative and provide more proof that New Jersey – not Nevada – can be the hub for a new wave of growth in the gambling industry. PokerStars is the biggest company in online poker, and we should welcome them bringing their American headquarters to New Jersey."

The trouble is, you need a lot of poker players in order to have a decent game

Since Black Friday, poker advocates — many of whom still have tens of thousands of dollars still locked up in the shuttered sites — have been trying to get online gambling legalized. When that effort failed at the national level, advocates turned to a state-by-state strategy.

So far, just Nevada and Delaware have passed laws legalizing online poker within their borders. The trouble is, you need a lot of players in order to have a decent poker game. Places like Nevada and New Jersey, which have established themselves as gambling destinations, have a better shot of attracting a sizable enough player pool.

If New Jersey legalizes online poker, it’ll be in a two-way race with Nevada in order to lure players. The new market could be just what Atlantic City needs to reverse seven straight years of falling casino revenues.