A missing mural by renowned street artist Banksy has re-emerged for sale in an online auction, and neighborhood residents are understandably outraged. The mural, which depicts a young boy toiling over a sewing machine making Union Jack textiles, was discovered last year on the wall of a Poundland discount shop in the Wood Green neighborhood of London. Residents noticed scaffolding and tarps surrounding the artwork last Wednesday, and by Friday only a hole in the wall remained. A few days later, the work was listed for sale by a dealer in Miami on an online auction site, with an estimated value between $500,000 and $700,000. 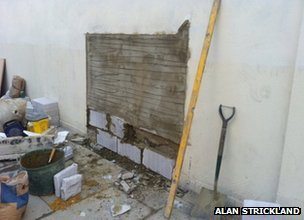 The piece was widely interpreted to be a critique of child labor, believed to have a part in producing many of the cheap items sold in discount shops like Poundland. But representatives of the Poundland chain said they were "fans of Banksy," and denied that they or the building's owners were involved in the art's removal or sale. Local council member Alan Strickland noted "lots of anger" among residents, urging them to demand its return. "Banksy gave that piece of art to our community, and people came from all over London to see it," he told the BBC. The auctioneers, for their part, claim that the work was obtained legally from a dealer.

It's not the first time Banksy's semi-anonymous public works have been lifted or sold. A piece called "Sperm Alarm" was torn from the wall of a bank last year and put up for auction on eBay for £17,000 (approximately $26,300). Another, called "Caution," was defaced and subsequently removed from its street corner in Los Angeles, shortly after the elusive artist lost his Oscar nomination for "Best Documentary" for Exit Through The Gift Shop.