Last year, Fujitsu unveiled the Raku Raku Smartphone F–12D Android phone (pictured above) for the Japanese market with a simplified interface specially designed for the needs of seniors. Today, the company is announcing that its first big step into the smartphone market outside Japan will be a 4-inch senior-focused phone very much in the same vein for France Telecom-Orange. Called the Stylistic S01, it will employ its Japanese cousin’s UI touches like oversized icons and a simplified layout in order to make things easier to use for the phone’s target customers.

Enhancements to the phone app make callers easier to hear

With an 8.1-megapixel camera, 1.4GHz single-core processor, and Android 4.0, the specs on the Stylistic S01 probably won’t blow your grandparents’ hair back. But like the Raku Raku Smartphone, it includes some useful enhancements to the phone app that make callers easier to hear, like a feature that slows down the voice on the other end of the line. Late last year, Fujitsu’s president announced that the company was planning a big push for the devices overseas, which means the phone likely won’t be exclusive to France for long. The country’s seniors won’t be able to buy it just yet, either; Orange is planning to release the Stylistic S01 sometime in June. 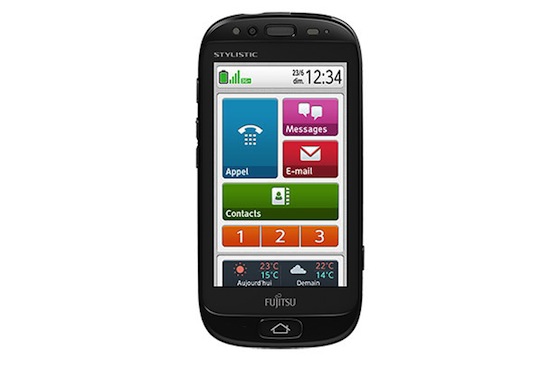