Inside the HTC One: betting the company on two daring features

Inside the HTC One: betting the company on two daring features

Left behind by its smartphone peers, HTC battles back with a new camera and new software

HTC was once a dominant, if not the dominant, player in the smartphone industry. It began by manufacturing smartphones like the Palm Treo, entered the market with Windows Mobile devices, and created the first Android smartphone. Yet HTC’s early lead in the space has evaporated: Apple created the iPhone, Samsung has dominated the Android market, and the carriers — once HTC’s greatest allies — are less relevant than ever in creating consumer demand.

As a result, HTC’s last quarter saw it drop to its lowest profits since 2004 and the company is now barely hanging on to tenth place in global smartphone shipments, according to a recent Gartner report. All this happened despite the company’s stalwart attempts to reimagine itself with the One series last year. HTC is on the ropes and needs a win, badly.

Enter the HTC One, which is taking not one, but two giant risks in smartphone design in what looks for all the world like a last-ditch effort to get back in the game.

The first risk HTC is taking is trying to re-think what a smartphone camera should be. It is calling it the "UltraPixel Camera" and questionable branding aside, it’s a daring take on the spec-war that Android OEMs have been fighting all these years. The rub is that there is technically only a 4-megapixel sensor behind the lens, something that consumers will undoubtedly worry about despite HTC’s attempts to educate them about how digital cameras actually process images.

"We know that the industry, essentially, has been shipping this big fat lie"

"We know that the industry, essentially, has been shipping this big fat lie" about megapixels, HTC’s Director of special projects, Symon Whitehorn, argues. Sensors that try to pack too many megapixels into too small of a space are "carrying a load of crap," he says, in the form of "extraneous data that you don’t want." 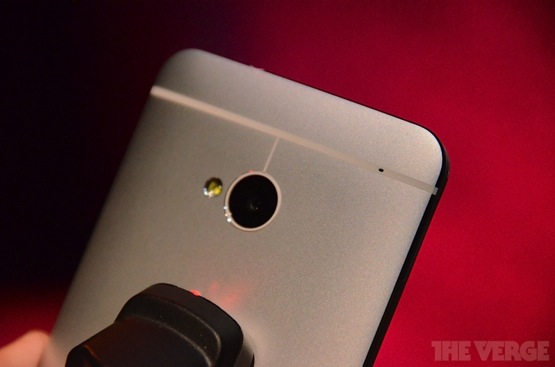 Because it’s using fewer pixels with higher quality imagery and less "bloated data," as Whitehorn calls it, the new sensor gives HTC a chance to try some new things. The first is a new kind of media it’s calling a "Zoe," which amounts to a four-second movie combined with simultaneously-shot high-quality stills. From these files, users can pull full-quality images and also automatically create small movies. At their best, these "Zoes" work a bit like automated Vines or Cinemagrams, but unfortunately without those apps' social networks. You can share them on YouTube, Facebook, or on HTC servers — though in a stunningly short-sighted move, HTC will only store them for 180 days.

Another benefit is improved low-light photos, thanks to bigger pixels that can take in more light — in fact, the size of these pixels is more comparable to a point-and-shoot camera than a smartphone. Like Nokia’s Lumia 920, the HTC One features optical image stabilization, and in our very brief testing it was quite good at dark shots. While any camera can get "great pictures on a sunny day," Whitehorn says, "I want to start getting great pictures in conditions I face normally."

"The industry has been hoodwinking you," Whitehorn says, "because it hasn’t had the courage or the conviction to do the right thing." The right thing, according to Whitehorn, is to opt out of the race to increase megapixels and instead go with an ostensibly better sensor with fewer pixels.

Yet being "right" and selling phones are two entirely different things — and even if HTC turns out to have created a better smartphone camera than its competitors, the company will have a hard time convincing consumers of that.

The history behind HTC Sense is long and, unfortunately, varied. In the earlier versions of Android, Sense filled in many of the functional gaps and was much better-looking to boot — although saying that in relation to Android 1.6 isn’t exactly high praise. In fact, as Android itself got better, Sense seemed stuck with aesthetics and functionality that were increasingly out of step with Google’s new design directions. The last version of Sense went some way towards improving the overall look of Sense — but as Android users settled into the look of Ice Cream Sandwich, it became apparent that big changes were needed on HTC devices.

HTC’s AVP of user experience, Drew Bamford, tells us that HTC "touched almost every corner of Sense on this revision." HTC redesigned all of the icons to look a little less cartoonish, but it’s more an evolution of the company’s design language than a complete overhaul. "We really flattened things out a lot," Bamford says, but "we haven't gone as far as some of our competitors in flattening the UI because we feel there is some benefit to giving people a little bit of tactility to the experience so that it feels more friendly and more touchable." For several years now, we've heard HTC tell us similar things about Sense — this year the company needs to actually be right about it.

HTC has also (finally!) gotten rid of the fat, bottom-aligned tabs it used on its apps in favor of more traditional, Holo-style pivots. And yes, Sense’s most iconic design element, the flip clock, has been replaced with something much more subtle: "We don't want people geeking out over the rendering of the flippers on the clock, we want people to be looking at the content."

So the look and feel of the new Sense is an evolution with more aesthetic than functional changes. That’s true everywhere on the HTC One except on the most important screen on the phone, the one you see when you hit the Home button. There, you’ll find "BlinkFeed," HTC’s radical rethinking of what a smartphone homescreen should be. It’s essentially a clone of Flipboard, displaying news, Twitter, and Facebook updates. BlinkFeed is admittedly good-looking, displaying information and photos in a grid of variously-sized rectangles.

HTC says users should think of it more as an information consumption experience than as a news-reading tool — which is to say that it’s not meant to replace a dedicated Google Reader or Twitter client. Instead, Bamford tells us that the "default experience out of the box is more appropriate to what you'll do on a daily basis with your phone, which is standing in line at Starbucks and snacking on content."

"It was intentional to make a bold departure"

Bamford says that "it was intentional to make a bold departure" for the new homescreen. "We felt that now was the time to do something radically different," Bamford says, comparing the new homescreen to the old icons-and-widgets desktop model that he says "is a relic of 70's desktop computing and it's not appropriate for the way that our current customers are using smartphones."

High-concept UI theory aside, taking what used to live inside an app like Flipboard and making it the default homescreen is a big risk that could alienate both regular and power users alike if HTC doesn’t make it a great experience. In fact, this isn’t the first time that a smartphone company has tried to integrate social content into the homsescreen — Motorola’s first Android phone had software called "Blur" that was a bloated monster that slowed down the phone and was nealry impossible to use. HTC doesn’t seem to be going as far down that ill-fated road as Motorola did, but it’s hard not to worry that BlinkFeed is pointing in the same direction.

HTC giveth and HTC taketh away

Although it must be said that the vagaries of Android skins (or, more accurately, custom Android software) is not high on most consumers’ priority list, it still matters to HTC’s traditional demographic: power users. For those who seek something close to the stock Android experience, HTC giveth and HTC taketh away. The aesthetic and functional refinements to Sense bring it more in line with the stock Holo look — an issue that’s more important for making HTC’s phones feel better aligned with third-party apps than any dogmatic preference for Google’s vision of Android. On the other hand, HTC has taken what used to be the core of the Android experience and shunted it off to the side in favor of BlinkFeed. It's also based on Android 4.1.2, not the latest version.

The idea of replacing the homescreeen with something like Flipboard may be alternately intriguing and infuriating, but either way HTC is committing to it.

HTC is behind, far behind, and its prospects for catching up and maintaining relevance — to say nothing of its marketshare — look increasingly dire. HTC has always had pretty great industrial design for its hardware and the One is no exception. It’s also always been unafraid to play the "speeds and feeds" spec game, introducing ever-faster processors and ever-higher resolutions screens. Again, in that department, the One does not disappoint. So in many ways, HTC is still sticking to its old playbook, but those plays have left it as an afterthought in the face of Samsung’s marketing budget and Apple’s dominance.

HTC is behind, far behind

The company also faces another challenge: Verizon. AT&T, Sprint, and T-Mobile have all committed to carrying the HTC One, but Verizon is sitting this one out (so to speak). Verizon isn’t absolutely necessary for smartphone success in the US — just ask Apple — but it’s a carrier partner (and a marketing budget) that HTC will sorely need to mount an effective comeback. It could still do it with the Droid DNA (or a successor), but once again HTC is being forced to fragment its own brand.

With challenges such at these arrayed against it, the company has no choice but to try something different. Instead of something, HTC has decided to try two things. Launching a flagship smartphone with what looks like 2010’s camera specs would be audacious enough, but HTC doubling down on differentiation by layering on a love-it-or-hate-it homescreen.

HTC has been dealt its fair share of losing cards, so it’s doing what all self-respecting card players do when they see that soon they’ll have nothing else to lose: it’s going for broke.

More from this stream HTC One: everything you need to know