Sunrise for iPhone: a next-generation calendar app plugged in to Facebook and Google

Foursquare alums see a world where everything connects to your calendar

Share All sharing options for: Sunrise for iPhone: a next-generation calendar app plugged in to Facebook and Google

"I looked at my iPhone, and I don’t use any of the default apps anymore," says Pierre Valade. "Instead of Music, I use Spotify, instead of Notes, I use Evernote, and instead of SMS, I use WhatsApp and Kik. All these things are moving to the cloud, and every app is becoming more social." But one app was different. "I looked at Calendar, and thought maybe the same thing was going to happen, but who's going to do it?" Valade asked. Two years passed, and some great apps like Fantastical launched, but none sought to change the way we think about calendars. These apps were intelligent, but they provided no context on the events you have coming up.

Maybe it's because calendars are boring. Google Calendar nor iOS Calendar have changed much in the last five years. Events still have titles, locations, dates, times, and attendees, and it takes a lot of effort to sync multiple calendars reliably with your phone. Valade is today unveiling Sunrise, a fresh take on calendars for iPhone — and perhaps the first real "cloud calendar" I've ever used.

Sunrise began as a daily digest email that pulled in events from Google Calendar, Facebook, and Eventbrite. Valade built the service on nights and weekends while at Foursquare with colleague Jeremy Le Van. But soon, 50 percent of Sunrise users were opening the daily email — a scary-good statistic. The duo realized that they had uncovered something much bigger: a market for calendars as a consumption experience, connected to all your favorite services. They left Foursquare to work full-time turning Sunrise into an iPhone app. 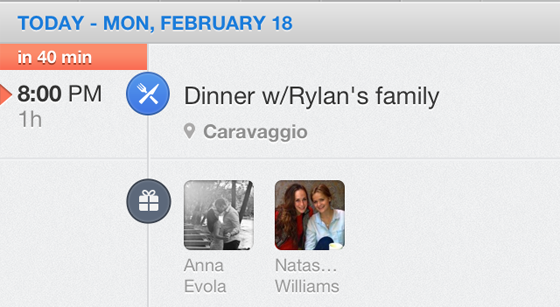 Sunrise displays a "list view" version of your calendar, accompanied by two weeks of dates you can scroll and tap on to choose a specific day. As you scroll you’ll notice plenty of nice touches, like a tiny countdown timer that shows how many minutes there are until your next event. "It's exactly where we think calendars should go," Valade says. "Changing the UI to tell you the time of your next meeting is what you really want when you open a calendar app on the street." If you swipe on an event, Sunrise provides you with directions using Google Maps.

There are inline weather updates for today and tomorrow, and a variety of colorful icons that show up next to certain kinds of events. For example, a fork and knife icon shows up next to events that contain words like "dinner," and a plane icon next to events that include the word "flight." There are also contact pictures from the web that accompany events with attendees, so you can quickly see the faces of the people you’re meeting with. Thanks to its photos, icons, and maps, Sunrise gives personality and context to the static list of events you're used to.

Various functional nuances also make Sunrise fun to use. As with Fantastical, Sunrise includes "quick-add" event creation you can activate by holding down on the plus sign in the top right corner of the app. You can type things like "Dinner with David Pierce on Friday at 8PM at The Waffle House," and an event will be created accordingly. Sunrise’s quick-add works well, since its based on Google Calendar’s language parsing technology, but it isn’t as wonderfully polished as Fantastical’s. You can’t switch calendars using a command like "/work" or "/home," for example. But unlike Fantastical, or any other third-party calendar app on iOS, Sunrise lets you invite friends or coworkers to events right inside the app. Apple doesn’t allow third-party apps that work directly with the iPhone calendar to send out event invites, but Sunrise operates in the cloud, so it just works.

One of the main draws of Sunrise is that it automatically pulls in events you’ve already RSVP’d to, like meetings with coworkers on Google Calendar and parties friends are hosting using Facebook. If you tap on a Facebook event you’ve RSVP’d to, for example, you see an entirely new event page that lets you change your RSVP, see the event description from Facebook, and even see photos and names for all the event’s attendees. If a location is attached to the event, a map appears below the event listing. At the end of each day in Sunrise, there’s a row of images representing friends whose birthday is today — also pulled from Facebook. Tapping one of these people lets you write directly on their Facebook wall or shoot off a quick celebratory text. 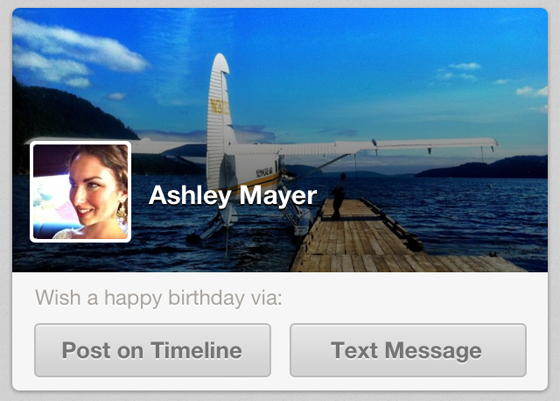 Google Calendar events also have extra context, like a list of who’s attending, a map, and a button to message all the attendees. "A lot of apps give you more information around who you’re meeting, like Cue or Evernote Hello," Valade says, "but that’s another app you need to check. You can’t separate the experience of consuming from creating." Tempo, another app that launched last week, also hoped to provide "context" in the form of bringing up email attachments and phone numbers, but it perhaps bit off more than it could chew. Cue can't even edit events, which disqualifies it from being a calendar replacement. Sunrise is about tastefully combining the data from the services you already use. Tapping the sun icon in the top navigation bar brings up any event you’ve been invited to on Google Calendar or Facebook, which you can view and RSVP to with a couple taps.

Sunrise for iPhone doesn’t yet include events you’ve responded to on Eventbrite like its email digest counterpart, but it soon will. As time goes on, Valade says, Sunrise will plug in to many new services — which means less adding things manually to your calendar. For example, a TripIt integration could add flights to your calendar, with up-to-the-minute gate changes, Google Now-esque airline art, and even a link to the airline’s mobile website. A SongKick integration could show concerts for bands you’ve liked on Spotify, and an NBA schedule integration could add games for your favorite team. "Add to Sunrise" buttons could pop up on all sorts of sites, letting you add an event to your calendar in one click after you've purchased a movie ticket. An increasing number of services these days use an API to share data with other services, so working with sites like TripIt isn’t too difficult — from a technical standpoint, at least. The larger challenge, Valade says, is making events look just right on the small screen.

Sunrise is the full package, inspired by the best features of the iOS calendar, Facebook calendar, and apps like Fantastical. Valade and Le Van waited to launch until they considered Sunrise "feature complete" — on par with other calendar apps from get-go, since they know people will only pick one calendar app for their home screen. But Sunrise is still missing a few things: there's no iCloud or Exchange calendar integration, notably, but adding support is "top priority" Valade says. There's also no search for finding upcoming events, and no week view for seeing your week at a glance. "We didn't build a week view because we don't know what week view is solving," Valade says. Instead of building a conventional week view window, he would would more likely consider adding a feature that helps you figure out what you have coming up while you're creating an event — which to him accomplishes the same goal.

"People have only one life, and everything should be in one place."

Like any third-party app on iOS, Sunrise can’t check for updates in the background, but the app generally pulled down updates very quickly when I opened it. There's also no desktop component yet, meaning that if you want to go "all in" on Sunrise, you'll have to subscribe to your Facebook events inside Google Calendar so you don't miss anything. It's also worth noting that Sunrise acts as a middleman between your phone and Google, and like new email app Mailbox could be susceptible to outages.

What makes Sunrise so special is that it relegates Google Calendar to being the dumb pipe it is. For now, Google Calendar is the best backbone for a calendar app, but soon, that backbone could be something else. Since Valade and Le Van have built a system that easily ties in to any calendar or API, the switch will be easy when that time comes. "People have only one life, and everything should be in one place," Valade says. "We’ve worked hard on connecting things that should be connected."