How does the HTC One stack up against the competition?

Share All sharing options for: How does the HTC One stack up against the competition?

HTC has just announced the One, a new flagship Android smartphone for 2013. The HTC One runs Android 4.1.2, but an update to the latest version, Android 4.2, is promised at some point in the future. It has a quad-core Snapdragon 600 running at 1.7GHz, 2GB of RAM, and 32GB of onboard storage. It's already been compared to its competition aesthetically — but how do those specs stack up against other flagship models? 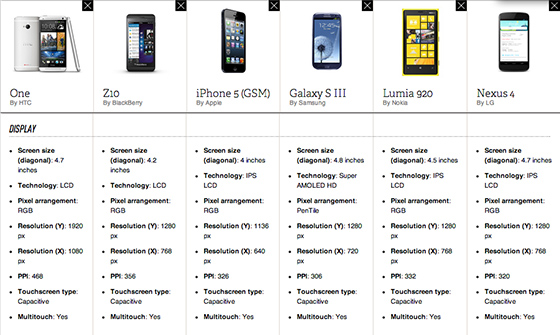 HTC's new handset has the densest display we've ever seen in a smartphone, with 468 pixels per inch versus the iPhone 5's 326ppi unit and the Z10's 356ppi display. The other big new feature is its new camera, which features what the company is calling "Ultrapixels." These are enlarged pixels that HTC says absorb around three times the light of regular 8-megapixel sensor, but limit the maximum photo size to four megapixels. This system is supposed to offer excellent low-light performance, an area that Nokia's Lumia 920 currently dominates, but we'll have to wait to test HTC's claims for ourselves.

Check out our hands-on impressions of the new HTC One

HTC One: everything you need to know