That sweet cardboard sound: jamming out with the Berlin Boombox

That sweet cardboard sound: jamming out with the Berlin Boombox

My ability to build and fix things falls somewhere between "don't touch that, I’ll just call the guy" and "IKEA-handy." I can screw in a lightbulb, and follow instructions if it’s a particularly complicated lightbulb, but that’s about it. So when the Berlin Boombox arrived at my door, I left the DIY stereo unbuilt, tacitly admitting defeat every time I listened to Bikini Kill on my tinny MacBook Air speakers instead. But today, I gave in and built myself a stereo. A cardboard stereo.

The Berlin Boombox started as a Kickstarter project, I’m sure in part because the pitch for this device makes almost no sense. "It’s a €65.00 (about $86) stereo that you build yourself, and it’s made entirely of cardboard!" But from the get-go, we were taken with the Boombox’s design, the product of Berlin-based designer and illustrator Axel Pfaender. The hyper-graphic, bold illustrated design (there’s a stereo drawn on my stereo!) would be right at home in a Kid n Play music video. Cardboard speakers aren’t a new idea, necessarily, but most look like they’re made of cardboard, and sound, well, like they’re made of cardboard. Pfaender’s simple, earnest Kickstarter video promised something different — a unique, cool speaker that neither looks nor sounds like it’s neither $86 and made of the same stuff as the box it came in. 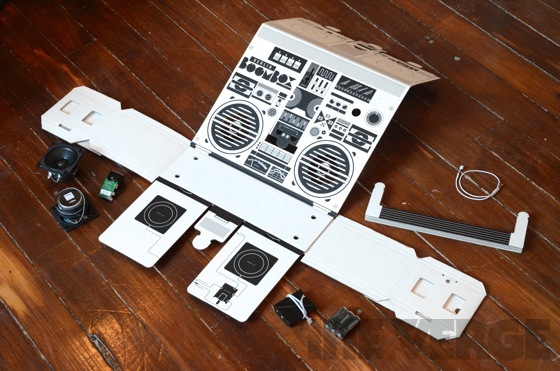 Before I could get to any of that, I had to figure out how to turn the half-dozen or so pieces on my floor into a stereo. It’s actually fairly easy to do, once you figure out the inscrutable instructions; they’re written in German and then in slightly broken English, with illustrations that look more like a coded treasure map than anything else. But if you’ve ever put together anything from IKEA, you're a veteran at this kind of thing. You don’t need a single tool, either: putting together the Boombox requires screwing and unscrewing one knob, threading three or four wires, and a whole lot of folding. The single piece of cardboard is cleverly designed so that installing the speakers is as simple as sliding them into a slot, and the whole thing comes together when five or six tabs are slotted into their appropriate homes. It takes a lot longer to decipher the instructions than to execute them, and I felt faux-handy in no time.

Fully assembled, the Boombox’s sturdiness belies its materials – I’m not suggesting taking this stereo out in a rainstorm, but it’s definitely well put together. Every piece feels tightly connected and perfectly machined, with one exception – the knob that controls both power and volume is loose and fiddly, which is a shame since it’s the only part you really interact with, and sort of ironic because the most unimpressive part of the cardboard stereo is the only part not made of cardboard. 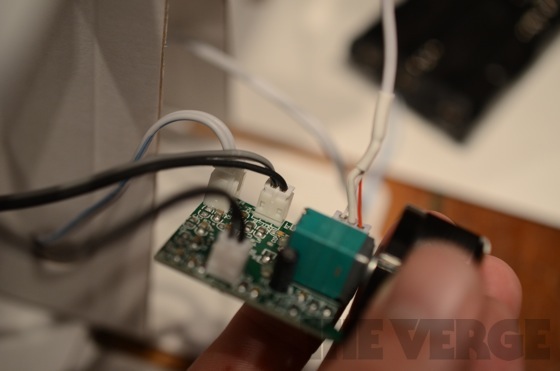 After about 15 minutes of assembly, the mess on my office floor had turned into a cool, retro stereo. A 3.5mm audio cable dangled from the cutout in the front where your music player goes — the Boombox works with anything with a headphone jack. At least, it claims to: about half the phones I tried to get in the middle slot were too big to fit, and the short audio cable meant I had to dangle my iPhone 5 upside-down so I could plug the Boombox into its bottom-located headphone jack. (I’m guessing Pfaender wasn’t happy about that change from Apple back in October.) The Boombox was definitely designed with an iPhone 4S in mind, and anything bigger starts to cramp the available space.

The whole thing is powered by three AA batteries, which are stowed away inside the Boombox's rear, underneath a flap of cardboard you can fold back to easily access and replace them. It's incredibly portable — about two pounds fully assembled — and would unquestionably look cooler on your shoulder than whatever boombox you used to carry around. 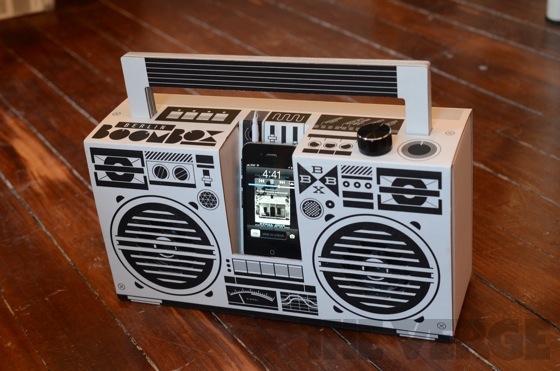 The dual-speaker setup sounds a lot better than I expected, though that’s certainly faint praise. The Boombox gets fairly loud, certainly enough to fill a room as long as it’s a bedroom and not a concert hall, and offers a level of clarity and range your laptop can’t hope to match, but it’s a long way behind what I’d expect even from normal $86 speakers. I don’t think you’d be able to hear the Boombox very well from your bedroom window, while I stood outside in a trench coat playing "In Your Eyes." It sounds about as good as the tiny Jambox or a cheap set of Logitech computer speakers, but you could pretty easily find better speakers for the Boombox's price tag.

The Berlin Boombox is cool enough to have earned a permanent place on my living room shelves and in my conversation-starter repertoire, but it’s not going to replace my stereo anytime soon. Basically, you’re paying $86 for a cool-looking piece of art that also happens to play music — that’s not such a bad deal. Plus, I feel like a handyman every time I look at it, and you can’t put a price tag on that.