With three days left to go in its Kickstarter campaign, Central Standard Timing's super-thin E Ink watch has raised nearly five times its original goal. In celebration, the team has gone into detail about how the "world's thinnest watch" went from a desk clock that could wrap around your wrist for travel to its current form as a curved metal band. After the team realized their original plan to spell out words required too much processing power, the watch went through everything from the analog concept seen above to a digital "wrist belt" they worried would lead people to twist and damage the display. 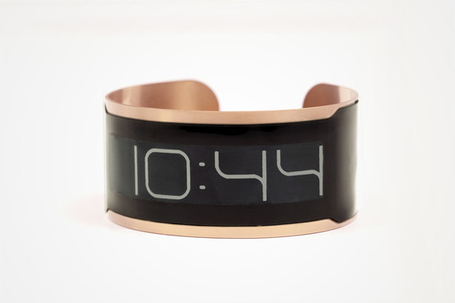 A few days ago, the team also announced new colors for the CST-01. In addition to the original black and white options with a stainless steel backing, there's an all-black variant and one with the above gold-colored steel back. Like the original watches, they're apparently set to ship in September 2013 if all goes well.