Microsoft is busying preparing a host of Blue updates to its software and services and the first screenshots are starting to emerge. Winaero and Win8china have both posted screenshots of two builds that are known internally as Windows Blue. The Verge is unable to confirm the exact build numbers, but we understand that Microsoft bumped its NT kernel to 6.3 in the last few weeks. 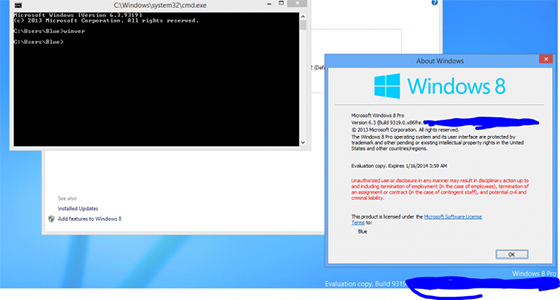 The screenshots do not show what type of features Windows Blue will include, but the NT kernel change is notable. Windows Vista adopted NT kernel 6.0, while Windows 7 jumped to 6.1, and Windows 8 to 6.2. A switch to 6.3 with Windows Blue suggests this is a major revision to Windows, but one that will be delivered much sooner than a traditional Windows cycle. Sources tell us there is no "Windows 9" project inside Microsoft at the moment, and that Blue is the next major update to Windows.

We're told that Windows Blue is designed for a new wave of hardware, particularly the 7- and 8-inch tablet form factors. Microsoft will introduce its operating system update to Windows 8 users at a low-cost to ensure users upgrade in preparation for regular yearly updates. Windows Blue is expected to debut later this year.