At the Super Bowl, 4K might literally be a game-changer

At the Super Bowl, 4K might literally be a game-changer

CBS's six high-res cameras could do away with debatable calls

Last year, in the most important moment of the most important game of his career, Kyle Williams screwed up. The San Francisco 49ers' punt returner came up to try and field a short kick from New York Giants punter Steve Weatherford, but at the last minute decided not to even try. He backed off, but the football bounced haphazardly in his direction anyway. It grazed his right knee, and became a live fumble; the Giants recovered it, and quickly scored a touchdown. The Giants, of course, won the game in overtime, and two weeks later won the Super Bowl.

Except the ball didn't hit Kyle Williams' knee. Or maybe it did. Even now, after countless viewings and endless expert analysis, no one really knows for sure. And Ken Aagaard, EVP of Operations at CBS, wants to make sure that doesn't happen again. "I said to myself right then," Aagard told me, "'I wonder if we can use these new 4K cameras to make this better.'" 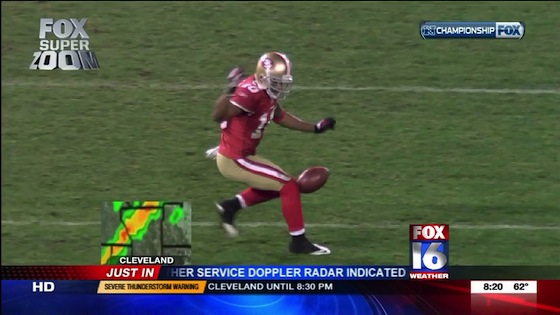 4K has a bit of a chicken-and-egg problem in most situations. 4K content looks good on any TV, but its disadvantages — extra bandwidth and cost chief among them — outweigh the slight quality bump on a 1080p television. But for CBS and the NFL, more pixels means more and clearer zoom, and that means they'll know whether the ball hit his knee or not.

In addition to its 80-plus HD cameras planted around the Superdome and throughout New Orleans, CBS will be shooting this year's Super Bowl with six 4K cameras. Japanese company For-A supplied the cameras — Aagaard says CBS considered a handful of different 4K models, particularly Sony's, before being wowed by For-A's offering — and for most of the game, possibly the entire thing, they won't be called upon for broadcast. But at some point during the game, there may come what the CBS crew calls "a perfect play." Maybe a punt grazes a player's knee, or doesn't. Maybe the quarterback's knee was down before he threw a game-changing interception, and maybe it wasn't. Maybe a receiver made an incredible circus catch before rolling out of bounds, or maybe he didn't. 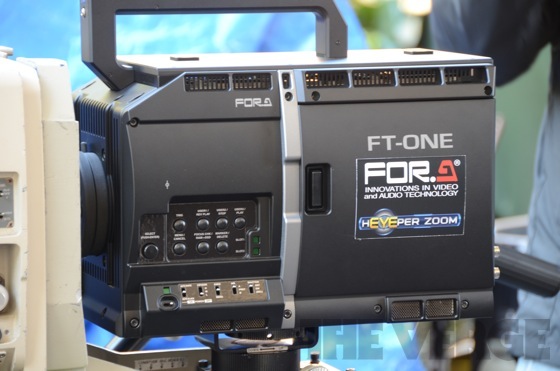 If and when that play comes, CBS and For-A will spring into action. The two companies worked with Evertz, a Canadian company that specializes in building broadcast systems, to develop a tool called DreamCatcher that lets the production crew immediately tap into the 4K footage to get larger, more detailed replays than a 1080p camera offers. With four times the pixels comes much-improved clarity, and a 1920 x 1080 cross-section of the image is going to be far sharper than the blurry replays we're used to seeing. The touch-based interface Evertz created also allows the operator to quickly isolate the exact moment in question — CBS also chose For-A in part because the company's cameras shoot up to 500 frames per second — and then pick two spots in the frame, zoom in on both, and quickly switch between them. Ball in hand? Check. Knee down? Check.

I watched the CBS crew go through this process with a particularly scrutinized play from Week 14. Indianapolis Colts quarterback Andrew Luck goes back to pass, and as he's rolling out of the pocket is caught from behind by a defender. As he's going down, he tries to throw to a receiver wide open about twelve yards down the field. But as is prone to happen when a 300-pound man is tackling you, Luck's pass only goes about five yards — into the arms of a defender, who promptly runs it into the end zone for a touchdown. 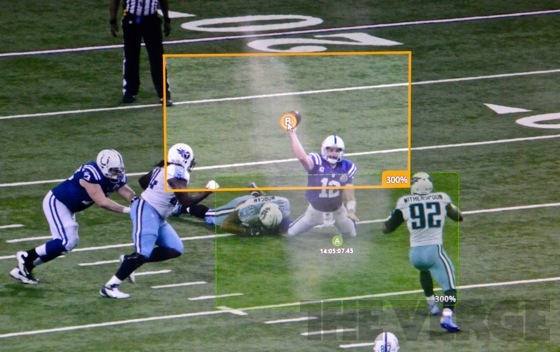 The play was quickly reviewed, though, because Luck's knee hit the ground at almost the exact moment he released the ball. The touchdown was upheld, though it underwent incredible scrutiny in the following weeks – blurry replays, everyone thought, showed he was down. Except for those who thought the blurry footage clearly showed he wasn't.

Luck was down. Period. I know because I saw the footage in crystal clarity. I saw a CBS technician tap Luck's knee on his touchscreen monitor, and then tap on his right hand — up on the TV popped an image of Luck's knee, definitely down, zoomed to 300 percent and still plenty sharp. Just to prove his point, the operator skipped back a frame, and then forward, so I could see Luck's pads ripple as his knee collided with the turf. With one tap, he then switched to Luck's hand, the ball still firmly in his grip. He's clearly down. Touchdown reversed. 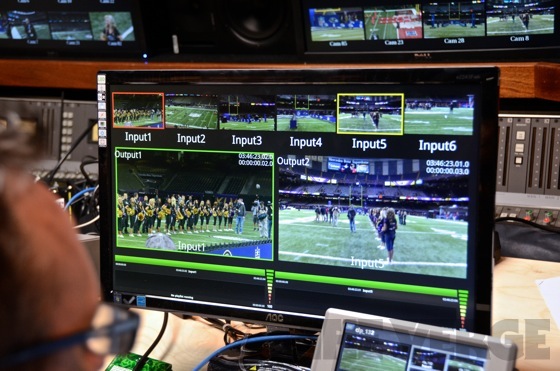 Six weeks ago, when this play actually happened live, the officials could have gotten the call right. CBS even had the 4K footage it needed – the network's been testing the For-A cameras in a limited capacity since the beginning of the season. It's CBS's responsibility to provide footage to the referees so they can go under the replay hood and make the right call, but it only has 60 seconds to do so. The Evertz system wasn't fast enough yet, and CBS missed its window.

Aagaard and his team promise it's faster now, and indeed I was watching Luck be saved from his own stupidity within about ten seconds. The speed and power of the system — it can also be used to quickly track the ball in a player's arms for a replay, for instance — has everyone at CBS and the NFL believing 4K replays are ready for their big debut at the biggest game of the year.

Now all we need is a perfect play.