Last summer, Google announced the "Explorer" edition of its Glass headset meant for developers and early adopters. Pre-orders for Glass took place at Google I/O, where attendees were offered the opportunity to put down $1,500 for early access to headset. Now, Google is re-opening that pre-order program to "creative individuals" via its #ifihadglass page. The search giant says it's looking for "creative individuals who want to join us and be a part of shaping the future of Glass." 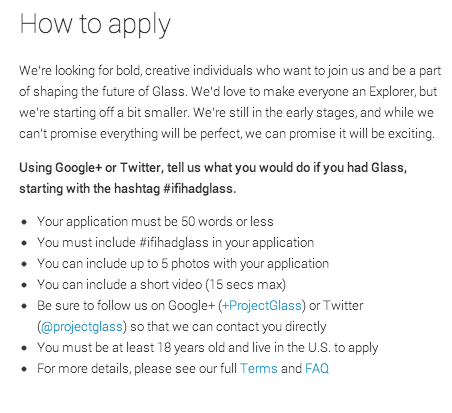 The #ifihadglass competition is open to US residents only, and you must be over 18 to enter. To apply, you'll need to write 50 words or less explaining what you'd do if you had Glass, starting with the hashtag #ifihadglass. You can also include up to 5 photos with the application, and a 15 seconds video. You'll also need $1,500 — despite the selective nature of this new pre-order program, Google isn't just giving them away. The company also took the opportunity to show us some fresh images of the augmented reality headset's design, as well as a video showing an early look at the UI.