As of last night, Brooklyn Nets fans seeing a game at the new Barclays Center no longer have to worry about missing big moments while waiting in line for a drink, standing in the interminable bathroom queue, or just chatting with nearby fans. They'll just have to open up the Barclays Center app on their iOS or Android device, where thanks to Cisco's new StadiumVision Mobile technology, for the first time anywhere they'll have instant access to live game footage from a handful of different angles, plus replays and stats from the game. And if they want to order nachos while waiting in the beer line, they can do that too.

The Barclays Center is possibly the most technologically advanced stadium in sports, with 8,000 feet of LED signage, 4,000 Ethernet jacks, and the incredible Oculus marquee. The stadium's namesake app (designed by Willow Tree apps, the same team behind the awesome Verge apps) takes advantage of all the integrated tech, and allows you to do everything from order food from your seat to send messages for display on the scoreboard.

Watch the game, and get replays any time you want them

The app is certainly one of the best of its kind, but its most impressive feature is truly unique: the ability to access live, in-game video, including the official television feed, and to rewind up to 30 seconds just in case you missed something awesome. You can switch between up to four cameras — a mix of proper TV cameras and GoPros mounted around the arena, which can be moved around depending on the night's event — for a variety of sights and sounds, and so you never miss a thing. 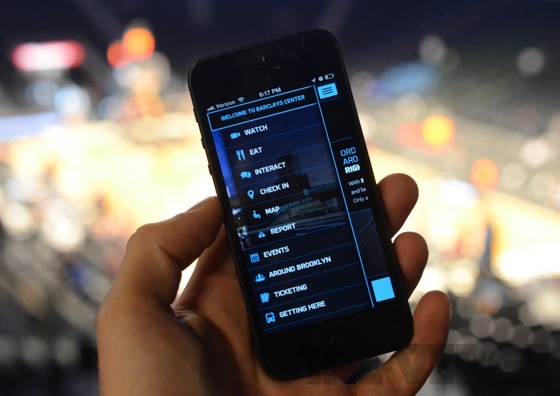 It all starts when you enter the Barclays Center and connect to the arena's open, public Wi-Fi. That connection is what opens up the food-ordering, check-in, interaction, and video services. Both the app and the Barclays Center prompt you to connect to the Wi-Fi network (imagine the PA announcer voice shouting "Go to Settings, then Wi-Fi..."), and the app even presents different options if you're not in the building and connected.

'Multicast' Wi-Fi means 19,000 people can connect without killing my stream

It's all powered by Cisco's new StadiumVision Mobile, which reps compared to how cable is delivered to your TV: instead of everyone having to crowd onto a single connection, the "multicast" connection splits the feed and delivers the same thing individually to everyone. That means my stream is the same whether I'm alone in the stadium or surrounded by 19,000 other Nets fans. In practice, it works remarkably well — I didn't get a chance to test it with 19,000 people, but even in a quickly-filling arena my stream never slowed or broke. I switched between a game feed and a stationary camera above the rim, and jumping back into a replay worked seamlessly. As someone who's missed game-winning shots, grand slams, epic goals, and incredible touchdowns because I really wanted a Diet Coke, having the game and its immediate history at my fingertips is pretty fantastic.

The stream is delayed about two seconds from the game itself, which for replays is actually perfect — by the time you look down the play's happening again. It does make it impossible to listen to the TV feed's announcers, though, since they're always slightly behind the game as it unfolds. If Cisco and the Barclays Center can get that lag closer to zero, this app could easily replace the goofy AM radios fans still wear to games.

The Barclays Center has clearly accepted the idea that people are going to use their phones and tablets at a basketball game or concert. So it has found ways to enhance the experience, and offer things you'd never be able to get at home – on-demand replays, new camera angles, and more. (Also delicious, delicious nachos.) This type of technology should quickly make its way into other stadiums — the Barclays Center is just the first implementation — but for now, the Nets might be the only team better to watch live than on TV.