On stage at the "See the Future" event in New York, Sony has just announced its latest gaming console: the PlayStation 4. "We believe that PlayStation 4 represents a shift from thinking of a box or console," said Sony's Andrew House. "PlayStation is the best place to play." The console will be arriving in the holiday season of 2013, though unfortunately no pricing details were given, and Sony didn't provide any glimpses of the new hardware.

As introduced by lead system architect Mark Cerny, the PS4 is based on a "supercharged PC architecture," with an X86 processor, enhanced PC-style GPU, and 8GB of GDDR5 unified high-speed memory. The controller is called, unsurprisingly, the DualShock 4, and features the Vita-style touchpad we'd heard about, and a light bar on the back to identify players. Each PS4 will contain a 3D camera to track the various controllers using the bar. The PS4 contains 8 CPU cores, providing almost 2 teraflops of computational performance. The power allows for 30,000 polygons to be rendered in real time (by way of comparison, Heavy Rain on the PS3 utilized 15,000). "Overall, our goal has been to architect the system to support a breadth of experiences," said Cerny.

"Our goal is to make sharing of video as popular in the PlayStation 4 as screenshots are today."

For those tired of waiting around for lengthy boot times, there's some welcome news, as the console will let users suspend and resume play just by pressing the power button. The console also contains a secondary chip that is designed just to manage uploads and downloads, even if the power is off — and digital titles will be playable as they're being downloaded. On the upload side, the PS4 has always-on video compression that will allow users to upload video as they go (proving another set of rumors correct), and letting gamers share footage or photos of their gaming excursions easily. Showing off the feature, Cerny said "Our goal is to make sharing of video as popular in the PlayStation 4 as screenshots are today."

That social focus extends to chat, where the platform will allow users to watch games being played by others, and "reach out" to play on a friend's system. Owners will also be able to use their smartphones and other personal devices to browse videos and use companion apps. Facebook and Ustream were both touted as third-party services the PS4 was designed to work with. 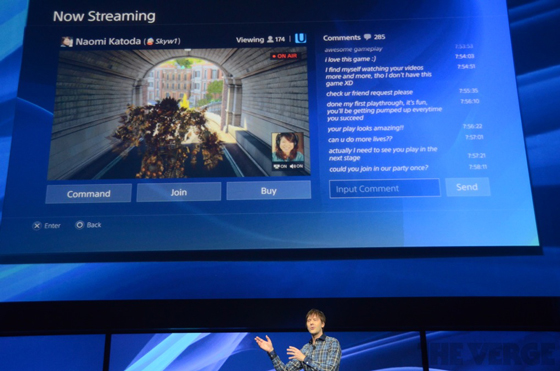 Sony's acquisition of Gaikai is also bearing fruit with the new console. Gaikai co-founder and CEO Dave Perry took the stage to introduce his company's contributions to the new PlayStation, which include instant notifications when your friends buy a given title. Trying a game ahead of time is also in the cards, with Perry saying "With Gaikai and the PlayStation Store, you'll be able to instantly experience anything you want. Try it for free, share if you like it, and pay only if you like it."

While not many specific examples were given, users will be able to broadcast themselves in real time — triggered by the new "share" button on the DualShock 4 (video trimming is built into the PS4 interface). Developers will also have the tools to enable what Perry called "director" status, letting one individual alter the gaming environment of the player using the console, such as changing maps, or throwing power-ups when they're in need.

The company is also betting heavily on the PlayStation Vita: developers will be able to implement second screen functionality that will let gamers play PS4 titles on their Vita. The stated goal is that all PS4 titles will eventually be playable on the Vita. Unfortunately, while the new console will in fact not be backwards-compatible with current PlayStation 3 titles, the much-anticipated streaming solution for PS3 titles isn't here. However, Perry did say that the company was "exploring" the ability for PS3 titles to eventually be available on almost any device.

A series of game demos rounded out the presentation — including the confirmation that Bungie's Destiny would be coming to the console. Sony's decision to not announce the price or a firm shipping date for the PlayStation 4 will no doubt give the company room to maneuver should it need to respond to any gaming announcements from Microsoft, and the lack of a hardware reveal will give it something new to trumpet as the year progresses. We imagine we'll learn a little bit more at this year's E3 in June.