'Year Walk' is a feverish vision quest through Swedish folklore

'Year Walk' is a feverish vision quest through Swedish folklore

You’ll be lost and confused, but in a good way

There are no hints in Year Walk, which launched on iOS today. As you get yourself lost in the dark forest, crunching through the snow, the game doesn't help you in any way — there isn't even a menu. You won't find much information outside of the game either, which is fitting for a title based on a concept that's little known outside of Sweden. Most players won't know much — if anything — about the vision quest-like phenomenon, or about Swedish folklore in general, and that's exactly the way developer Simogo wants it. "The element of surprise and the constant feeling of not knowing what is going to happen is one of Year Walk's biggest strengths," says Simogo's Simon Flesser.

It feels weird at first

Year Walk is maybe best described as a graphic adventure game, but it's one that focuses on atmosphere above all else. "Year walking" is a practice that was once widespread in Sweden, where people would venture out on a specific day, following specific rules, in an attempt to capture a glimpse of the future — all while avoiding various dangers, both supernatural and not. In the game, the world is black and white (aside from the occasional, disturbing splatter of red) and you navigate the two dimensional forest from a first person perspective.

This involves a unique and strangely satisfying control method that has you pushing and pulling to move through different layers of the world — it feels weird at first but soon becomes second nature. And that's a good thing, because walking is a large part of what you'll be doing. The game consists of one interconnected forest that's easy to get lost in — there is no map, of course — while the puzzles require you to think differently than most video games. Often, the solutions are more playful than logical, and the game makes some great use of multitouch along the way.

The result is a game that's both refreshing and frustrating, with puzzles that feel different but are easy to get stuck on in some cases. Of course, that's kind of the point. "We think that figuring out all of these things is really enjoyable," says Flesser, "but we do realize we are doing something that is quite risky as some people might find it frustrating." Not many games intentionally try to make you feel lost and confused, and that's part of what helps make Year Walk feel unique. The team at Simogo also believes it might foster some social aspects for the otherwise single player game. "We hope that people will reach out to each other for hints or try to solve things together."

"We do realize we are doing something that is quite risky."

The experience is also more than just a game. In addition to Year Walk itself, there's also a free companion app that serves as a sort of mini encyclopedia on the year walking phenomenon. It's a unique take on the concept of second screen entertainment, and flexible in a way that lets you use the app and game however you want — you can read up on the history before, during, or after playing, or not at all. I found myself hopping in and out of the game to read up on things I came across in the forest, and it provided a nice way to clear my head when stuck on a particularly troublesome puzzle. The two experiences work on their own (though there is at least one point where they interact) but using both simultaneously provides a richer experience.

The companion could have simply been part of the game itself, but the idea was actually inspired in part by our current fascination with multitasking. "Most of all we think it just feels really neat to have it separate," says Flesser, "sort of like going to the library and researching, but it's all in the palm of your hand, with all the info you need already collected for you." The team enlisted the help of anthropology professor Theodor Almsten to research and write the companion, though Flesser admits they took a few liberties when implementing the folklore into the game itself. 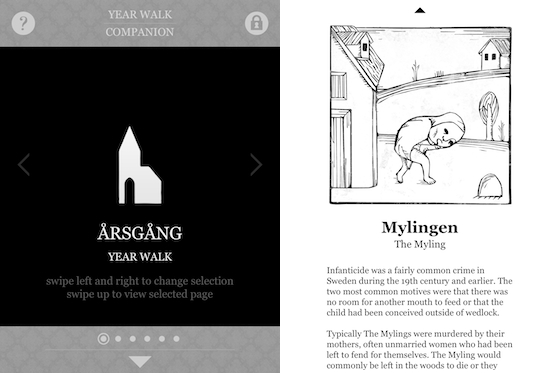 Considering the subject matter, it would've been easy for Year Walk to end up as an obscure, hard to approach title, but it feels just the opposite — the gameplay is simple and natural and the dark world is filled with equal parts mystery and horror. Much of the few hours you'll play will be spent wandering, but the moments when something does happen are frequent enough that there's a constant sense of tension. You never know what you'll run into. And as things take a turn for the strange towards the end, it really does feel as though you're experiencing a vision quest fever state.

Year Walk also feels like a significant change for Simogo, a studio best known for cute and charming iOS games like Bumpy Road and Beat Sneak Bandit. "We think it's important to keep surprising people with what we do, and can do, so that part was very intentional," Flesser says of the departure. "But on the other hand, we will always do what feels right for us to make, so it's not part of some big strategy in that sense. The project simply felt right and really exciting. We had talked for a long time about doing something that feels more mysterious and dark, and everything fell into place when [collaborator Jonas Tarestad] presented his script."

"There is just something about playing a game that you know very little about."

Year Walk not only feels very different from the studio's previous work, but also from most video games in general — I can't recall an experience that felt or played quite like it, and it's especially different from the types of games we're used to on mobile devices. It isn't a pick up and play experience, but rather a game that demands your full attention. You'll want to play at night with a good pair of headphones on and, preferably, knowing as little about it as possible.

"There is just something about playing a game that you know very little about," says Flesser. "You rarely get that today in the internet age."