Nokia Lumia 720 revealed in new leak alongside Lumia 520, both expected at MWC

Share All sharing options for: Nokia Lumia 720 revealed in new leak alongside Lumia 520, both expected at MWC

Last fall, as Nokia was busy launching its first Windows Phone 8 devices — the Lumia 920 and 820 — we first revealed details about two more phones from the company, codenamed the Zeal and Flame. Twitter account @evleaks has now released its latest leak, this time picturing the two rumored devices. The account calls the two phones the Lumia 720 (pictured above) and the Lumia 520 (pictured below), with the former being the Zeal and the latter the Flame.

There are no new specifications to be had with today's leak, but our previous reports have pegged the Lumia 720 as having a 4.3-inch display, 1.0GHz dual-core processor, 512MB of RAM, 8GB of storage, and a microSD card slot. The lower-end Lumia 520, meanwhile, is expected to have a 4-inch display, 512MB of RAM, a 1.0GHz dual-core processor, a 5-megapixel camera, and 4GB of storage. The two devices should slot in directly above and below the $249 Lumia 620, leaving Nokia with a full spectrum of Windows Phone 8 devices at every price point. In addition to the leaked images, Windows Phone ad network AdDuplex informs us that it has spotted the two Lumias in its statistics, suggesting that they're actively being tested. If the rumors are true, we wouldn't be surprised to hear more about these phones next week at MWC 2013. 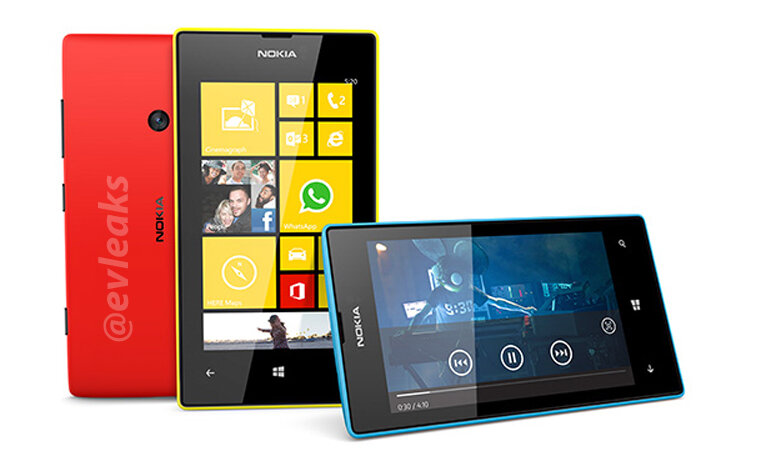