Alcatel announces the One Touch Idol X smartphone with Android 4.2 and a 5-inch 1080p display

Alcatel announces the One Touch Idol X smartphone with Android 4.2 and a 5-inch 1080p display

Alcatel isn't exactly known for high-end hardware, but the company is trying to change that with the confusingly-named One Touch Idol X. It's a 5-inch, 1080p Android smartphone with an edge-to-edge display and Android 4.2. Judging from the press photos, it seems it will be a near-stock implementation — we have our fingers crossed. Other key specs include an unspecificed quad-core 1.2 GHz CPU, 16GB of internal storage plus an SD slot, a 13-megapixel camera, and a 2,000 mAh battery. The Idol X will come in a variety of colors, much like Nokia and HTC's recent Windows Phone 8 devicers, and it's also quite a thin device — only 7.1mm. Unfortunately it seems there is no LTE on board, so these phones are likely to be internationally-focused; a US release seems unlikely at this point. The phone should start rolling out this July, though it isn't yet clear exactly where it'll be available.

Update: An astute reader noticed that the image Alcatel provided of the One Touch Idol X says it has an 8-megapixel camera, but the company's PR states it has a 13-megapixel camera. According to the Alcatel team at MWC, the camera's megapixel count will vary depending on the market where it is released.

Update 2: Check out our hands-on photos and first impressions of the One Touch Idol X here. 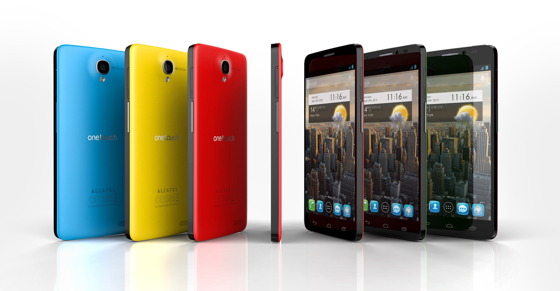