NOTE: For those that didn't see the countdown in the app and now upon launch the 'Offline' screen is still there with negative values, triple-tap the glasses and the timer will switch to 3 minutes remaining followed by a 90 second countdown. After skipping the tweet screen, the purple 'Online' screen will appear, and if you close and relaunch the app it'll stay on that screen.

The "Paul" Offline app is now available on the App Store! Thanks to everyone who downloaded it. Almost 2,000 downloads in 2 days and 24 five star reviews! An update will be out soon adding local notifications and tweaking the credits animation (see my post at the bottom of the page).

The current UI (Huge thanks to Andrew Rockefeller): 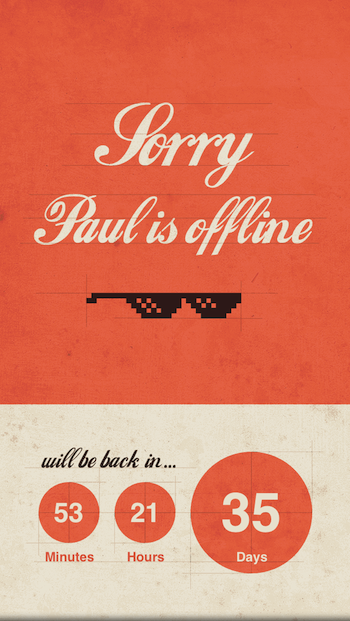 Small plug: I have a game on the App Store that I worked on during the last holidays. It's an augmented reality FPS called Optic Combat. Big update coming soon: for details see this Touch Arcade thread.