Facebook is investigating unofficial memorial pages for Sandy Hook shooting victims after members of Congress expressed concerns that they were becoming "vehicles for harassment and potentially fraud." This morning, Democratic Connecticut Senators Richard Blumenthal and Chris Murphy (D-CT), as well as Democratic Representative Elizabeth Esty, asked Facebook to remove a large number of tribute pages that sprung up after the December shooting. These unofficial pages aren't created by families or community members, and their creators have been accused of appropriating a tragedy for their own gain.

"She would not want people making pages in her name."

The mother of Sandy Hook teacher Victoria Soto, whose death has spawned a huge number of unofficial memorials, told the Greenwich Time earlier this week that she'd attempted to get pages removed to no avail. "I understand some people have good intentions [and] some people say she is a public figure," she said, "but, to me, she is my daughter that was put in this awful position... and she would not want people making pages in her name." Referencing the Greenwich Time article, Blumenthal requested that the pages be removed:

Pages providing platforms for people to violate the privacy of families as they grieve, or seek financial gain through soliciting donations under false pretenses, or generating Facebook "likes" for marketing purposes, should not be given quarter in the Facebook community.

Now, Facebook looks to be responding to these requests. Blumenthal's office told us that Facebook had responded and was "eager" to work on removing pages that violated the terms of service by posting misleading information (as could be the case on some Victoria Soto pages) or providing a platform to harass victims' families. While we weren't told that Facebook has actually begun removing pages, several seem to have disappeared in the last few minutes, including the one shown above. Facebook did not immediately respond to a request for comment. 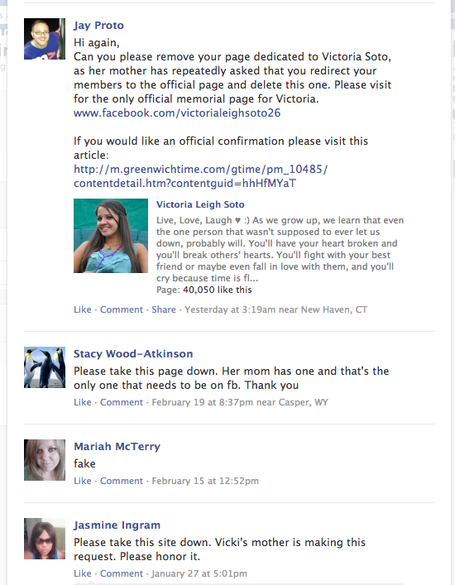 The difficulty of monitoring Facebook's vast user base has led to complaints that its enforcement is byzantine or inconsistent. The now-removed pages often contained condemnations from other users, but the Greenwich Time reported that Facebook was initially noncommittal about removal. It's especially difficult when content falls into a gray area between harassment or appropriation and offensive but allowable commentary on an event or person. In this case — as in a previous controversy over violently misogynist content — publicizing the problem may have caused Facebook to give it a second look.