MWC 2013: as the show grows larger, the news gets smaller

Without a Google booth or a Microsoft event, the Mobile World feels strangely subdued

Share All sharing options for: MWC 2013: as the show grows larger, the news gets smaller

The 2013 edition of Mobile World Congress will be remembered for two rather antithetical things: the enormous new venue of Fira Gran Via, and the distinct lack of headline-grabbing devices. In years past, attendees in Barcelona would be treated to grandiose and glitzy battles for attention between powerhouse manufacturers like HTC, Nokia, and even Microsoft. Just last year the show played host to the launch of HTC's One series, the Nokia 808 PureView, two new Sony Xperia phones, and the full Consumer Preview of Windows 8. Now contrast that to today: Nokia, Samsung, and LG all fleshed out the flabby middle of their device portfolios, Sony had no new products to announce, and even the traditionally wild Asus merely iterated on its tablet-dockable phone paradigm.

There's no denying that a major cause for this shift can be found in the increasing importance of software and commoditization of very capable hardware. It's now simply harder to stand out on the strength of specs or design alone, so companies are dedicating more of their resources — both behind the scenes in development and in their on-stage speeches — to software.

Yet at the same time, there's a tangible change in culture, attitude, and goals around the Gran Via halls. Whereas consumer electronics trade shows were once all about their two titular characters — the consumer and the electronics she aspires to own — this year's MWC and CES have been about the interaction between businesses. MWC this year features a "Mediterranean Networking Garden" at the venue, complete with a mini golf course for sealing deals between executives far from their home links. The amount of business talk may not be greater in absolute terms, but the dearth of major product announcements overshadowing it has made it more prominent.

The original things driving and sustaining trade shows' popularity with regular human beings were splashy, room-hushing announcements from the biggest players in the game. Big launches like the Galaxy S II at MWC 2011 had a halo effect that generated publicity for their smaller competitors as well — just by virtue of being in the same room.

But the old way evidently wasn't working to the satisfaction of the industry leaders, so everyone has broken off and started to do their own thing. Microsoft quit CES, Samsung decided that every hero Galaxy device deserves its own event, HTC followed suit with its One unveiling a week ago, and Google's Chromebook Pixel got its launch completely separately from MWC — where Google no longer has a booth. Attracting global press is a webcast livestream away for any of these major companies, and far, far cheaper than setting up amidst the crowded halls of a show like MWC or CES. 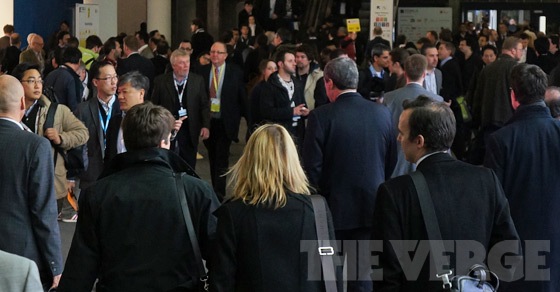 That leaves emerging players like Huawei, ZTE, and the hordes of their fellow Chinese companies to step in and fill the void as they try and attract mainstream attention, just as they did at CES. And to their credit, they're trying: Huawei rolled out its flagship Ascend P2, while ZTE showed the first production Firefox OS phone. But the fact is that there's undeniable vacuum of major news, and the vacuum itself is dominating the conversation in Barcelona. Where there once was excitement, optimism, and visionary ideas, we have networking hubs, distribution deals, and a selection of products that stimulate feelings closer to pragmatism than gadget lust.

As the big players grow stage-shy, smaller actors fail to fill the spotlight

Trade shows aren't about to pull a disappearing act. They may be be losing relevance to consumers, but they're still thriving, useful cogs in the broader electronics industry. What it means for the rest of us, however, is a more fragmented distribution of major announcements. While you may no longer get the previous sprint of two or three days of massive news, the longer marathon may in the end prove a more enjoyable, and more easily digestible, way to keep up with the latest product news and innovations. And perhaps more importantly, products can be announced when they're almost ready to launch, rather than being tied to an arbitrary date dictated by a trade show press conference.

There's news here at MWC. There are deals being made that will alter the industry's story arc for years to come. And yes, there are interesting products. But the days of a million-dollar circus act press conference accompanied by a billion-dollar product launch are no longer the rule at trade shows. They're the exception.

Chris Ziegler contributed to this report

The best of Mobile World Congress 2013