BERG builds a home videophone for Google with the Connbox prototype

BERG builds a home videophone for Google with the Connbox prototype

Back in early 2012, BERG's Joe Malia gave us a collection of videophones in film as part of an unnamed design project. The project's goal, it turns out, was both simple and very difficult: create a piece of dedicated video hardware that could break people out of the "scheduled Skype call" mindset and get them to treat video as a tool for quick conversations or constant telepresence. Based on a request from Google Creative Labs to showcase Google's voice and video services with a device prototype, BERG created the "connection box" or Connbox, a kind of virtual window that lets users see and interact with others. 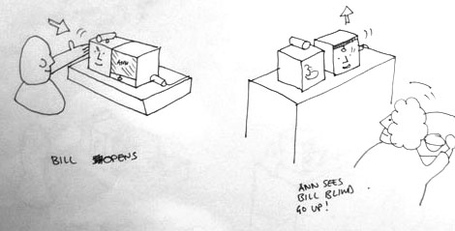 Though it went through several versions, there were a few consistent Connbox strategies. The first was to focus on larger panoramas rather than close-ups of faces, furthering the sense that the videophone was a "tunnel to another place." The second was to get rid of inset displays of your own face, either by splitting them into a separate section or by removing them altogether. A final prototype included a pair of screens — one for the user, one for the person on the other side — that could display video or have a virtual "screen" drawn over them, cutting off one side of the conversation.

Put together in 2011 but not revealed in detail until now, the Connbox isn't likely to become a real product, nor would it necessarily work as one. BERG says the project is on hiatus, but discussing its hypothetical future, the studio proposed a new class of devices meant for home instead of mobile use. The strategy is similar to that of the Little Printer, another single-purpose BERG device meant to bring communications technology back into the world of furniture and appliances.