It's been an exceptionally bad month for Twitter in terms of security — a few weeks ago, high-profile brands like Burger King and Jeep were the victim of embarrassing hacks, and now new agency Agence France-Presse (AFP) has had the Twitter account of its famed photo department hacked. The stream is posting pro-Syrian government and anti-Obama tweets and images; it appears to have started in the last few hours. AFP posted a note on its main Twitter account that the images were due to hackers and that they have been unsuccessful at regaining control of the account to delete the offending images. This is just the latest in a long string of black eyes for Twitter security — with every hack, we're left wondering when more rigorous security and two-step authentication will be rolled out.

It appears our @afpphoto Twitter account has been hacked. Recent photos posted are NOT ours. Unable to delete but working on it 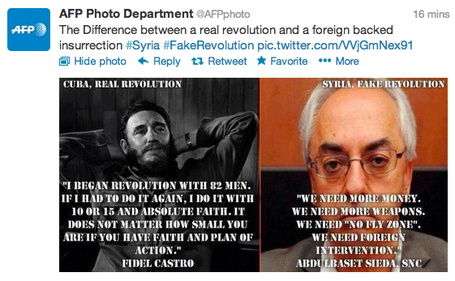