Two and a half years after launch, Instagram now says it sees over 100 million users active every month. In a blog post, co-founder Kevin Systrom describes the company's early days in October 2010, contrasting its humble beginnings with the current boom. While we don't know the exact current number of users, about a tenth of them seem to have joined in about the last month: in mid-January, Instagram said it had 90 million users, denying rumors that its new terms of service had sparked an exodus. 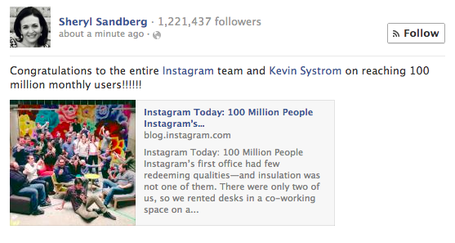 Facebook COO Sheryl Sandberg posted a congratulatory message to Instagram, which Facebook acquired last year. Despite its growth, Instagram isn't remotely close to catching its massive parent, but it's still doing well: it has roughly one-tenth of Facebook's billion monthly active users, and about half of Twitter's 200 million.