I'd been waiting for a great Android podcast app for a long time, and one has finally arrived. With RSS readers and Twitter clients that match the thoughtful design of their iOS counterparts, the Play Store has started to host quality as well as its undeniable quantity of software — but until now, there's never been a podcast app that wasn't ugly, a pain to use, or both. Pocket Casts is the unlikely savior: it used to be pretty terrible itself, with an awkward interface ported straight from iOS. But the app has been completely overhauled for its new version 4, and the results are fantastic.

The UI is attractive, simple, and Android-native; while it has a distinct style, it looks like it was designed for the platform, and just about everything works the way you'd expect across both phones and tablets. The effortless cross-device podcast syncing is a killer feature, too, especially as it'll be compatible with iOS once that app gets its own update. I'm not sure why Android never had a quality podcast app until now, but at least it was worth the wait — Pocket Casts is the best I've used on any mobile platform. 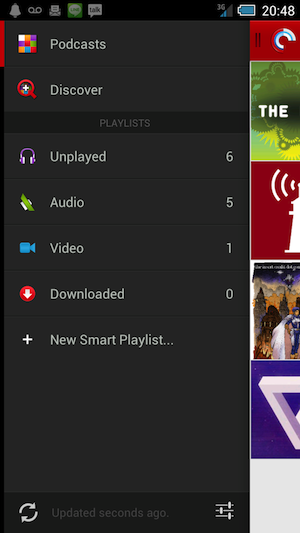