With Firefox OS, Mozilla gets a little dirty to clean the mobile web

With Firefox OS, Mozilla gets a little dirty to clean the mobile web

At MWC this week, showgoers are finally getting a look at the first Firefox OS devices that will come to market in the next few months.

To be blunt, they’re not very good: the ZTE Open and Alcatel One Touch Fire look and feel like low-end handsets from two or three years ago. The operating system — which is "made of the web," as Mozilla proudly proclaims — seems to struggle at times to overcome the cheap silicon it’s been saddled with.

But "good" is a relative term. Firefox OS could actually be wildly successful, no matter how underwhelming the actual phones may be. And that’s because — at least for now — you’re not the customer; your carrier is.

You're not the customer — your carrier is

The unbounded success of iOS and Android has been a mixed bag for the network operators that offer them: the app and multimedia ecosystems behind these platforms are controlled by Apple and Google, respectively. Carriers have been warring for years to avoid becoming "dumb pipes" which don't get paid for the mobile software and services their subscribers use. It's mostly been a losing battle, because your $2.99 App Store download doesn't line AT&T’s or Vodafone’s pockets with any cash either, apart from the data plan you subscribe to.

These carriers want back in, and Apple and Google aren’t about to share that revenue stream. Why would they? iOS and Android have become household names, products that customers have simply come to expect (just ask T-Mobile USA, which has resorted to rearranging its spectrum to better support unlocked iPhones). Even an enormous multinational carrier like Telefónica, a Mozilla partner, lacks the leverage to threaten Apple with dropping the iPhone from its lineup.

And that’s how we arrived at last Sunday’s Mozilla press conference, where senior executives from no fewer than five carriers enthusiastically took the stage alongside Mozilla CEO Gary Kovacs. How does a new kid in the perpetually overcrowded smartphone scene have the attention of the likes of Deutsche Telekom, one of the largest operators in the world?

Mozilla's trick: let them in on the money

By letting them in on the money. "We’re going to have a marketplace. But what’s different with our model is, we’re not going to have the only marketplace," said Mozilla’s SVP of products, Jay Sullivan. "I expect many marketplaces to flourish — some may be run by network operators, some might be verticals. You can imagine a marketplace around games, right?" And an operator-run app store begets an operator-run payment system for those apps, where the carrier gets a slice of the pie. "You can connect [a marketplace] to the network operator’s payment model and have upfront and in-app payments where the network operator is a full participant again in the customer relationship, which we think is very important," Sullivan continued.

If you polled ten wireless customers, I’d wager nine — perhaps even all ten — would disagree that their carrier should be a "full participant" in the app marketplace. Look no further than Vodafone’s failed "360," the mega-carrier’s attempt to own the entire customer experience from hardware to software and everything in between. When app stores are run by carriers, bad things happen: software that runs counter to their business interests goes away, for instance. And Mozilla’s proposition of "many marketplaces" sounds like a step backwards — a nod to a time when apps weren’t verified to be malware-free or billed using safe, secure payment methods. But it’s a proposition that cuts carriers back in by empowering them to create their own app stores on deck.

"It is a major step to bring balance back to the telco sector," noted Telefónica’s César Alierta. And in this case, it may not be a balance that consumers want. 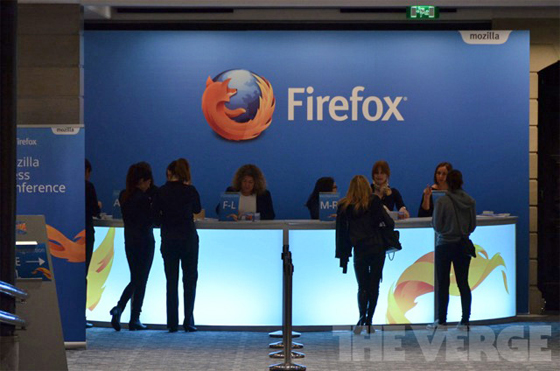 But here’s the twist: Mozilla is a nonprofit organization that provides free, open-source software to anyone who wants it. It effectively only makes enough money through Google search referrals to sustain itself. "Doing good is part of our code," it proudly proclaims. It’s motivated not by multibillion-dollar profits as carriers are, but by promoting and advancing web standards. If we can trust Mozilla's credo, then making money off carrier deals and selling phones isn't the end-goal at all: it's to ensure that mobile phones are as open as the internet itself. So why on earth would it be underwriting a potentially bleak future of carrier-branded app stores?

"I expect many marketplaces to flourish..."

It’s a means to an end — a good end, not an evil one. "We are fundamentally in the same place we were over a decade ago where [the web is] being unnaturally controlled by a few parties," Kovacs said. "The same call that we heard over a decade ago is being asked again of us now, which is to free the web." Mozilla wants to break the Apple-Google ecosystem duopoly by enlisting strange bedfellows — network operators — to support a low-cost phone that can run any app, published by anyone, anywhere, without restrictions. It just needs to get a little dirty to do it.

So discounting Firefox OS isn’t a wise bet, as unimpressive as it might be on the hardware that’s been shown so far. Parallels to the doomed webOS — which, as its name implies, was built in part on open web standards — are hard to ignore, but Mozilla’s project is a very different beast. No one at this week’s press conference was trying to knock the socks off of gadget-obsessed consumers with polish, pizazz, and design, as Palm did at its webOS announcement in 2009. Instead, Mozilla’s singular message was clear: carriers, we can help you make the money that you’re not making right now.

It's a means to an end

Between the lines, the message was very different: we’re here to save the mobile web. Mozilla needs better, smoother, prettier software and a whole lot of luck to do that — but by courting the men in fitted Italian suits who control the world’s networks, it’s put itself in a position to have a fighting chance.