Tweetbot pirates are naming and shaming themselves on Twitter

Tweetbot is generally considered the best third-party Twitter client for iOS users, though its $2.99 price point is a bit more expensive than the free official Twitter client. Lots of users find that to be a fair price, but that hasn't stopped jailbroken iPhone users from pirating the app — so developer Tapbots has decided to bite back. According to Gizmodo UK, pirated copies of Tweetbot automatically insert an embarrassing admission into the app's tweet compose field, which you can see below.

I've been demoing a pirated copy of @tweetbot and really like it so I'm going to buy a copy!

A quick search on Twitter shows a surprisingly high number of tweets with this default text, despite the fact that users could easily delete it and send normal tweets. It's not clear exactly when this started, but it seems to have picked up over the last week judging by Twitter search. Many of the offending Twitter users appear to be non-English speakers (at least though who have left the offending tweet in their timeline), though a number of English-speaking users have left the tweet intact as well. As for why anyone would do that? Tapbots developer simply said "stupidity?" on Twitter in response to that question. While such a trick won't do anything to stop app piracy, we'd imagine Tapbots gets a least a little satisfaction from outing pirates who use up the precious Twitter tokens that allow third-party apps to function. 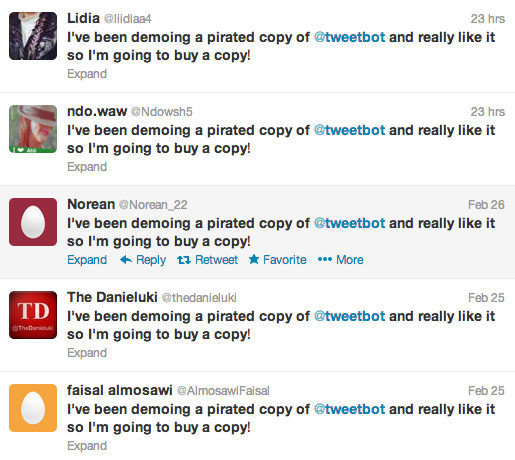