The ‘80s are alive in 'Star Wars Pinball'

The force is strong with this one

Share All sharing options for: The ‘80s are alive in 'Star Wars Pinball'

Physical pinball machines may be dangerously close to extinction, but Zen Studios is doing its part to keep them alive in digital form. The developer's games have graced both mobile and console platforms, with tables based on everything from Plants vs Zombies to Marvel superheroes. Now the studio is pairing the classic game with another 1980s obsession in Star Wars Pinball. The collection of three tables — based on The Empire Strikes Back, Boba Fett, and the Clone Wars animated series — blends satisfying pinball gameplay with distinctly video game-like elements, for a great pinball experience without all the spare change.

If you haven't played any of Zen's games before, they all follow the same basic formula: relatively realistic tables that err towards the flashy side of the spectrum, coupled with impossible video game elements like 3D characters that respond to how well you're playing. That formula remains for Star Wars Pinball. For instance, in the Empire Strikes back table, successful play will cause the virtual characters to act out famous scenes like the Battle of Hoth or Luke and Darth Vader's lightsaber duel. These missions require you to play in a certain way — make a tricky shot a few times in a row, for example — and provide a nice alternative to pure high-score chasing, as well as some variation each time you play.

The sarlacc pit is quite possibly the best pinball hazard ever

It's really the theme that makes the game stand out, though. The tables are on par with those in previous games, but there's just something about Star Wars that makes it a great fit for pinball. Lightsabers and blaster fire are great additions to a flashy, light-covered table, as are the classic Star Wars sound effects and music. Plus, the sarlacc pit is quite possibly the best pinball hazard ever. Even better is the fact that all three tables look and feel distinct. The Empire Strikes Back takes place on a Star Destroyer, with lots of clean lines and lightsabers in place of some side rails, while Boba Fett's table is rusty and gritty, with Jabba the Hutt slithering in the background. Meanwhile, the Clone Wars table is almost excessively bright and colorful, the table designed to attract players looking for more than just nostalgia. 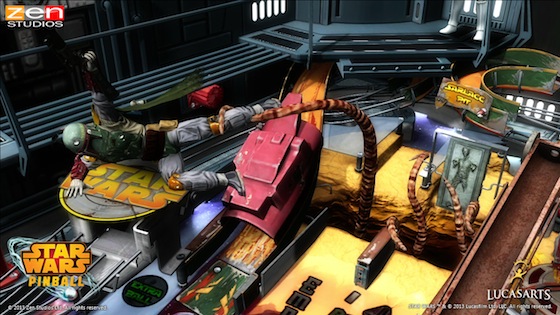 "The Clone Wars is something new and relevant to new Star Wars fans," says Zen Studios' marketing VP Mel Kirk, "and the color and energy that the series brings really comes to life on a pinball table." According to Kirk, Zen had been eying the license for some time, and the deal was finally signed "well in advance" of Disney's Lucasarts acquisition last October. "It is funny that Disney now owns both Lucas and Marvel, and both were acquired while we were in the middle of producing pinball tables," he says. "We had no idea there would be new movies and all the recent hype, but it's pretty good timing."

Star Wars Pinball also has the advantage of being available on a large number of platforms: you can pick it up as downloadable content for Pinball FX2 on Xbox 360 and Windows 8, as well as Zen Pinball 2 on PlayStation 3, Vita, and the Mac App Store. iOS and Android users, meanwhile, can grab the tables as a standalone app. Zen says that more platforms will be announced in the future and the studio confirmed that there will be a total of ten Star Wars-themed tables in all — though what's in store next, and when we can expect it, remains a secret. "There are obvious choices right in front of us," says Kirk, "but the hard part is making a decision."