As Pope Benedict XVI officially steps down, he's issued one last tweet on the @pontifex account. Despite previous reports, however, the account itself will simply remain dormant while the seat is empty. After an initial statement seemed to imply that the account would be deactivated, Vatican Radio later clarified the matter, stating that "@pontifex will be inactive during the interim period between the renouncement of Pope Benedict XVI and the election of his successor (sede vacante). @pontifex will be available for use by the next Pope as he may wish." Forbes also received a statement that the account would "not shut down." Presumably, the Vatican will be working hard to make sure hackers don't take the reins during its search for a new Pope.

Thank you for your love and support. May you always experience the joy that comes from putting Christ at the centre of your lives.

Update: Looks like the Vatican has one more surprise for us: Benedict XVI's tweets have now been removed, and the account's name has been changed to "Sede Vacante." We've still been able to access them on at least one Windows 7 machine, but otherwise, it's a blank slate for the next Pope. The tweets themselves, however, are still available — they've been moved to a Vatican archive. 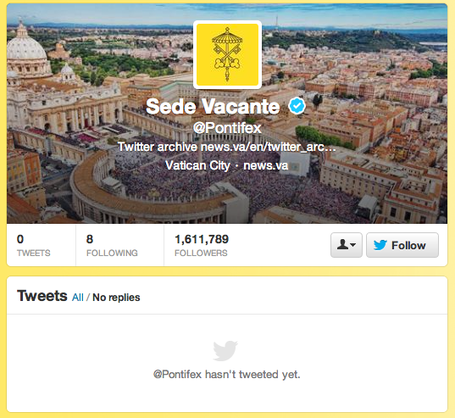 More from this stream The brief and wondrous life of @pontifex